This Gadget Beams Free TV Channels to Your iPad

With options ranging from ABC to Amazon Prime Video, it’s been said that we’re living in the golden age of television. Still, some of us who remember its iron or bronze age long for something seemingly long extinct: the ability to watch television for free, via over-the-air signals. Sure, you can do that using a digital antenna with a television, but this is 2016 — we watch television on tablets now.

A new device, TabletTV, has found a way to deliver these forgotten transmissions to an Apple iPad. (Android support is coming soon.) The system consists of a $89 digital tuner called the Tpod and an iOS app installed on your iPad. The Tpod, about the size of a deck of cards, connects to your home’s Wi-Fi network, grabs television signals out of the air and streams them to your iPad. It also doubles as a DVR, saving programs to an onboard microSD card.

To get started, you have to download the TabletTV Plus app to your iPad, and use it to setup the Tpod. There are two ways you can set it up. The first is by directly pairing the tuner to the iPad via a Wi-Fi signal sent from the TabletTV. This would be good for using TabletTV away from home. (And away from Wi-Fi.) The second involves connecting the Tpod to a home Wi-Fi network. With this scenario, the Tpod is attached both to digital television signals whizzing through the air, and to the Internet connection bouncing around your house, making it good for both surfing the web and catching the news.

These setup logistics are important to note. When you’re watching TV on your iPad through TabletTV, you’re actually watching a signal that’s been snared by the Tpod, slung to your wireless router, then streamed through your home’s network. That’s a lot of data flying around, and if you don’t place the Tpod in the optimal spot, the product becomes frustrating in a hurry.

In my home, my Wi-Fi router is in northwest corner of the basement, which means if I use my iPad on the southeast end of my house’s second story, my Internet connection suffers. Unfortunately, that’s where TabletTV’s over-the-air television signal is the best, so go figure.

Ultimately, I placed the Tpod on the second floor’s northwest corner, two floors up from my router, but not before testing its reception all over my home. On the first floor, it was glitchy. In the basement, it was unbearable. I also gave the Tpod a stress test, placing it between my refrigerator and microwave while trying to re-heat my coffee. (It really hated that — it lost its television signal completely.) In terms of reception, I’d venture to guess that upper story condo owners will love TabletTV’s reception, but basement apartment dwellers will think it’s garbage.

Of the 39 over-the-air stations in my area, I was able to stream 28 — national networks like NBC and Fox, as well as syndication darlings like Ion — to my iPad via TabletTV. At its best, streaming was glitchy and tempermental, but with enough patience, I managed to get a good, clean HD video signal. But the Tpod’s recording (and playback) functionality worked flawlessly. So if you’re looking for a DVR to record and watch your favorite network shows on your iPad, this is your low-cost solution.

But TabletTV aims to be much more than a mini DVR. With a menu option of “Internet Channels,” the app attempts to curate the web’s best video content as well. Including videos from sources as varied as TED and TLC, it’s an earnest first attempt to make the web’s vast video library as accessible as an interactive TV Guide.

Unfortunately, it looks like a first attempt, too. The app lacks polish, eschewing buttons for text, lacking animations or sound effects. But to the app’s credit, after hours of tinkering with it, it didn’t crash once. Not even when I mirrored it with my Apple TV, so I could watch the over-the-air content on a bigger screen.

Overall, TabletTV is a good product for people who like television, but hate the bill. That might sound like everyone — After all, who likes paying for access to something that’s broadcast for free? — but this isn’t a gadget just anyone will love. It would take a certain kind of cheapskate (millennials, perhaps) to fully appreciate everything that TabletTV can do. 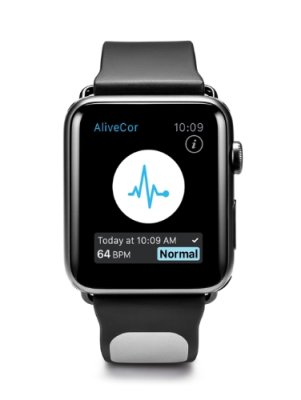 This New Apple Watch Strap Can Predict a Stroke and Tell if Your Heart is Healthy
Next Up: Editor's Pick