The E.U.’s Deal To Send Back Asylum Seekers to Turkey Is Illegal—and Immoral

In Lesbos, one of the 2,000 migrants who arrive in Greece daily
James Nachtwey for TIME
Ideas
By Charlotte McDonald-Gibson

In 2011, as the Arab Spring swept from Tunisia to Libya and disgorged its first wave of refugees, then Italian Prime Minister Silvio Berlusconi looked at the tens of thousands of Tunisians arriving on his country’s shores in decrepit boats—and decided to send them home. By the time the European Court of Human Rights ruled in 2015 that Italy’s policy contravened the bloc’s laws, Berlusconi was out of office and it wasn’t his government paying the fine.

This could well be the template for the European Union’s 28 nations as they pursue a deal with Turkey to handle the more than 1 million refugees and migrants who arrived in 2015, and governments scramble to prevent a repeat of last year’s chaotic scenes along borders from Greece to Germany. On March 7, European leaders reached a tentative deal with Ankara to send every person who arrives in Greece without the correct paperwork back to Turkey. For every Syrian returned, another Syrian living in Turkey would then be resettled in an E.U. country.

The exact details of the deal are due to be formalized at a summit on March 17 and 18, but the agreement appears not only to be illegal but also morally unsound and most likely ineffective.

As it stands, the returns would contravene a number of European and international laws, including the European Convention on Human Rights, which states that a country must investigate each individual asylum case, and the 1951 U.N. Refugee Convention stating that no person should be returned to a country where their life or freedom could be threatened. While Turkey has admirably hosted 2.7 million Syrians, ­human-rights groups have documented increasing incidents of abuse and cases of Syrians being forced back to their homeland, where sporadic violence continues despite a recent truce.

E.U. officials are working on the legalities, and given the slow workings of the European Court of Human Rights and the fact that there is no real mechanism for upholding the 1951 convention, they might choose to deal with any consequences later. But the agreement is also hobbled by logistical difficulties. Two thousand people are arriving in the Greek islands every day. Will these people, who have already come so far and risked so much, passively board boats and planes back to Turkey? And Syrians account for just half of the people arriving in the E.U. What will Turkey do with the Iraqis, Afghans, Eritreans and others eligible for asylum—process their claims or force them home?

History has shown that punitive policies do not deter people who genuinely fear for their lives. Berlusconi’s return of the Tunisians did not stop others taking the same route when war gripped Libya. Since 2011, the E.U. has built razor-wire fences on its borders, scaled back search-and-rescue operations at sea and toughened asylum laws. But the numbers trying to reach its shores keep on climbing.

Despite the rhetoric about deterring economic migrants, 88% of the people arriving are from the top asylum-producing nations, and they come because they have no other choice. And when one route is closed, people simply find another, often more dangerous, passage to sanctuary. Human-rights groups also worry about the morality of a one-for-one swap. Under the logic of the deal, one person has to risk their life in the Aegean Sea for another to be brought to the E.U. safely.

But there are other elements of the deal that could work if implemented fairly and accountably. Many refugees would stay in Turkey, Lebanon or Jordan—closer to home and in a familiar religion and ­culture—if they could find work to support themselves and schools for their children. If money channeled by the E.U. to Syria’s neighbors is spent on education for refugees and used as an incentive for states to legalize employment for them, more families would stay. Those with no legitimate claim for asylum in the E.U. should be sent home swiftly once their application is dealt with according to the law.

And a legal route for genuine political refugees to apply for resettlement in the E.U. from outside its borders is crucial. A family will put their children in a flimsy raft and risk drowning only when no other avenue of hope remains. Giving them that hope will save lives—and that priority should be at the heart of the European Union’s policies in the challenging year ahead.

McDonald-Gibson is the author of Cast Away: Stories of Survival From Europe’s Refugee Crisis, to be published in the U.K. on May 5 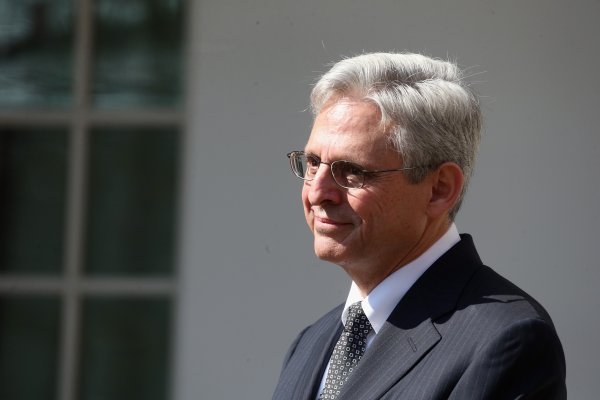 Nobody Knows Where Merrick Garland Stands on Abortion Rights
Next Up: Editor's Pick