It was a story so inspiring, they made it into a movie. The 2009 film Lula: Son of Brazil showed the ascent of Luiz Inácio Lula da Silva from a humble upbringing to the presidency. The seventh son of illiterate farm laborers from Brazil’s poor northeast, he and his family joined a wave of migration to São Paulo. As a child he worked as a dockhand and shoeshine boy before training as a metal worker.

During his time as a firebrand trade-union leader, the man who would become known simply as Lula rallied strikes that challenged the power of Brazil’s tightly woven political and business elites. Elected President in 2002, he rode an economic boom that lifted 35 million people out of poverty. In 2009, U.S. President Barack Obama called him the “most popular politician on earth.” He left office in 2011 with approval ratings of almost 90%, and the Workers’ Party (PT) he founded retained the presidency under his chosen successor, Dilma Rousseff. Now age 70, he speculated recently about another run at the top job in 2018.

But the fairy tale appears to have come to an end. A major corruption investigation has seen the former President forced to deny charges of money laundering, while widespread public anger against the political class, abetted by Brazil’s worst economic slump for 25 years, had led to impeachment proceedings against his political mentee Rousseff. On March 13, at least a million people took part in nationwide protests against the government.

The crises all have roots in a criminal investigation into a colossal corruption scheme at state oil giant Petrobras, which has ensnared dozens of prominent politicians and now threatens the man long held up as the country’s savior. For Lula, the question now is: Can his reputation ever recover?

The investigation had already trapped many of Brazil’s leading politicians and businessmen before Lula was detained for questioning on March 4, setting off a political earthquake. Prosecutors believe businesses paid almost $3 billion in bribes to state officials for rigged, overpriced construction contracts; those officials then funneled much of the cash to political parties, including the PT, to fund election campaigns.

But unlike others targeted in the probe, there is no suggestion Lula personally took cash bribes. Instead, federal prosecutors are focusing on his role overseeing Petrobras as President at the same time as the PT allegedly received millions in funds from company officials. He is alleged by investigators to have received political favors from companies swept up in the probe, like property renovations, and up to $8 million in donations and speaking fees to his nonprofit Lula Institute.

Lula denies wrongdoing, and his lawyer says the investigations against him are political payback for a long career of defying the establishment. “The ex-President was elected twice, with huge approval ratings. There was no suggestion of corruption,” Cristiano Zanin Martins, Lula’s lawyer, tells TIME. “Then, when Brazil faces a crisis, suddenly he is being investigated. There was the possibility that he would run again in 2018. This is clearly aimed at stopping him.”

In his early years as a politician, Lula intimidated Brazil’s political establishment. A largely uneducated working-class figure who had lost a finger in an industrial accident and spoke a simple, often ungrammatical Portuguese, his presence on the national stage was a de facto challenge to the country’s entrenched ruling class. “There is a growing segment of Brazilian society that wants the tables overturned,” he said in 1993 in the wake of yet another corruption scandal in Congress.

But Lula was defeated in three consecutive presidential elections, and in his fourth run, in 2002, he softened his platform and promised not to default on the national debt, soothing the international markets. “To get elected he had made serious compromises, not only on socialism but also with Brazil’s messy political system,” says his biographer Richard Bourne. “He was not prepared to be defeated forever.” His second term was bogged down in a cash-for-votes scandal that saw his former chief of staff convicted of payouts to political allies. Lula denied knowledge of the strategy and eventually survived almost unscathed.

Read More: Detention of Brazil’s President Could Mark the End of a Dynasty

Under Lula, Brazil became a significant player on the world stage and won the right to host both the 2014 World Cup and 2016 Olympic Games. In 2010, Brazil’s economy grew by 7.5%, its best performance in 24 years. Lula won the loyalty of the country’s poor and working class by funding social programs like a basic monthly welfare payment now given to 14 million families earning less than $42 a month. The PT won 90% of the votes in his hometown of Caetés during the last presidential election in 2014. But, by then, the Petrobras investigation was already under way.

The scandal that would rock Brazil’s political institutions began in 2012, just a few kilometers from the nation’s Congress in the capital of Brasília. Federal police were monitoring a gas station they believed was being used for money laundering—giving the investigation its name, Operation Car Wash—and the trail led them to deep within Petrobras’ futuristic headquarters in Rio de Janeiro. Slowly, by striking plea bargains with officials implicated in the scandal, the police unraveled a grand scheme of astounding scale and audacity.

Top Petrobras officials are accused of colluding with a cartel of construction and engineering firms to agree to overpriced contracts for major work that would be paid for by the state-run company’s multibillion-dollar budget. Federal prosecutors say the cartel then channeled the excess cash back to Petrobras officials and divided up the work themselves. The officials allegedly took cuts of those bribes, but passed much of the rest of it to dozens of politicians and several major political parties to be used in election campaigns.

The figures involved were huge. One Petrobras official, Pedro Barusco, a former director of services and far from the most senior figure involved, volunteered to pay back $97 million in bribes he had taken since 1997. He also alleged that the PT had received up to $200 million.

The scandal has grown to envelop senior figures from the world of business and politics— and eventually, on March 4, the trail led to Lula’s door. “Lula, besides being party leader, was the one ultimately responsible for the decision on who would be the directors at Petrobras and was one of the main beneficiaries of these crimes,” the federal police said in a statement. “There is evidence that the crimes enriched him and financed electoral campaigns and the treasury of his political group.”

Federal prosecutors are investigating donations to Lula’s institute and the renovation of a beachfront triplex in São Paulo state, which they say construction firm OAS did as a favor to Lula. State prosecutors in São Paulo charged Lula with money laundering for concealing the ownership of the apartment and requested he be imprisoned during the investigation. The request was not granted. A state judge has now passed the case to the federal judge overseeing Operation Car Wash.

Lula, who denies the charges, remains defiant. On March 16, the former President accepted a Cabinet position from Rousseff, as her chief of staff. The move will slow the investigations as only the Supreme Court can investigate, indict and try ministers—but it will also put Lula even closer to an unpopular leader struggling for her own political life. The street protests on March 13, which some estimates put as high as 3 million people, came as Congress prepares to reopen impeachment proceedings against Rousseff, whose approval ratings have almost fallen to single digits.

On March 15, it emerged that a top Senator in the PT claimed in plea-bargain testimony that Rousseff worked with her inner circle to suppress the Petrobras probe. Though Rousseff has denied wrongdoing and hasn’t been charged with any crime, she is facing calls for her resignation on the grounds of budget irregularities during her first term. “Impeachment was once a distant prospect, but now there is a strong campaign against the government,” says Lincoln Secco, a history professor at the University of São Paulo. “The outcome will be decided on the streets.”

It is still not clear how this story will end for Rousseff or for Lula. But the case against the former President has lifted a lid on the grubby, backslapping world of Brazilian politics. As the credits roll on the hagiographical film celebrating Lula’s radical youth, some of its major funders are revealed: OAS and Odebrecht, two of the companies at the heart of the Petrobras scandal. 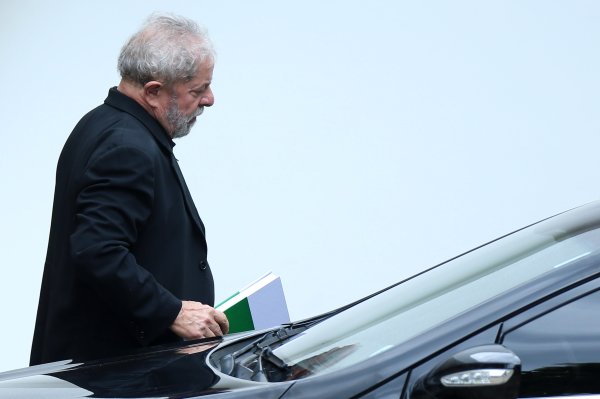