Merrick Garland Is the Best Conservatives Could Hope For

Trevor Burrus is a Research Fellow for the Cato Institute’s Center for Constitutional Studies.

In a move of masterful politicking, President Barack Obama nominated Merrick Garland, Chief Judge of the United States Court of Appeals for the D.C. Circuit, to fill the seat left by the untimely death of Supreme Court Justice Antonin Scalia. Garland is the consummate moderate, and he’s likely the best that libertarians and conservatives could have reasonably hoped for from this president.

With the looming prospect of either a President Donald Trump, whose philosophy on judicial nominations is as unknown and variable as the rest of his positions, or a President Hillary Clinton, who would certainly nominate much more ideologically extreme justices, Senate Republicans should give Garland the hearing he deserves. Whether Republicans should vote to confirm him, however, is a little more complicated. One thing is clear, however: “Letting the people decide” could get us something much worse.

In fact, many liberals are probably disappointed in this nomination. As we move forward in the nomination process, many committed liberals will probably wonder if Obama nominated an ideological squish, like David Souter was for President George H.W. Bush or Earl Warren was for President Dwight Eisenhower. In many ways, Garland has been so moderate that his commitment to some left-wing ideological causes is unclear. During the hearing for his nomination to the D.C. Circuit, Garland told the Senate that “[f]ederal judges do not have roving commissions to solve societal problems. The role of the court is to apply law to the facts of the case before it.”

Of course, it is obligatory for every judicial nominee to say that they will neutrally “apply law to the facts of the case before it.” Yet, it seems that in Judge Garland’s case, he’s often telling the truth about that.

For example, in 2003 in al Odah v. United States, in a decision that riled liberals, Garland agreed with a three-judge panel that federal district courts lack jurisdiction to hear habeas corpus claims of prisoners in Guantanamo Bay. The Supreme Court later overturned that decision by a vote of 6-3 in Rasul v. Bush. Garland’s vote in the case, however, seems to have been determined by an honest reading of then-existing Supreme Court precedent. If he had a burning desire to give Guantanamo detainees a day in court, then it was overcome by his neutral application of the law.

Furthermore, Garland hasn’t been as friendly to the rights of criminal defendants as many liberals would want. Conservatives may find solace in this, but libertarians who are committed to the protection of criminal defendants’ rights should be wary. Garland has rarely voted for criminals who are appealing their convictions. Again, however, and underscoring his reputation for neutrality, it seems that Garland has consistently applied the law to these cases rather than act out of a fervent desire to help or hurt criminal defendants.

Libertarians and conservatives should be concerned about Garland’s position on gun rights, however. When the landmark case of District of Columbia v. Heller—in which the Supreme Court would eventually rule that the Second Amendment conveys an individual right to own a firearm—was before the D.C. Circuit, Garland voted to re-consider the three-judge panel’s decision that found an individual right to own a gun. Garland also once voted to uphold a Clinton-era practice of holding onto firearm background check files, essentially creating a gun registry, despite the fact that federal law prohibits the government from holding onto the files.

That is certainly concerning, yet even in that case the dispute was over whether the words “destroy all records” mean “immediately destroy all records.” An honest judge could interpret the statute differently than the National Rifle Association without being completely antagonistic to Second Amendment rights.

This is not to say, however, that we should expect Garland to be a reliable vote in favor of the Second Amendment. Certainly not. But, given his record of neutrality, the behavior of a “Justice” Garland is not easily predictable, and that can be a good thing for libertarians and conservatives when comparing him to other possible Obama nominees or likely Clinton nominees.

All this is why Senator Orrin Hatch, who has been a dogged proponent of the Republican Senate refusing to consider an Obama nominee, said in 2010 that Garland would be a “consensus nominee” and that there would be “no question” that he would be confirmed. Such is the pickle that Republicans are now in and that President Obama strategically placed them in.

Republicans best bet is to play naked politics: the Supreme Court is too important to do otherwise. Read the polls and watch the Republican nomination process. If Trump emerges from the convention as the nominee, and the polls still show that he will take a shellacking from Clinton, then Garland should be confirmed. If something crazy happens, and there are many crazy things that could happen, then it could be cause to delay the nomination until after the election.

Some Republicans will keep saying “let the people decide,” but if there’s one thing we’ve learned this election year, it’s that “the people” are terrifying. 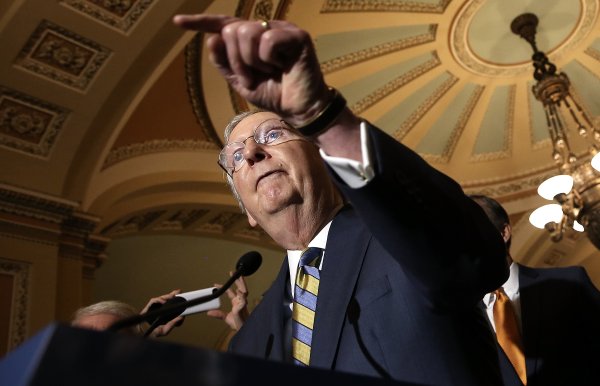