Everything to Know About Sony's PlayStation VR Headset

The device will compete with similar headsets from companies like Oculus and HTC. But instead of requiring a high-end, $1,000+ PC, PlayStation VR will be powered by users’ PlayStation 4 gaming consoles. The headset allows gamers to play titles in a more expansive and immersive environment.

Here’s a look at what you should know:

When can I buy the PlayStation VR and how much will it cost?

The PlayStation VR will launch in October of this year for $399. Sony hasn’t announced a specific release date just yet, but Shawn Layden, president of Sony Computer Entertainment America, told TIME that he’s hoping to have “that message sooner rather than later.”

What do I need to use the PlayStation VR?

You’ll need the headset, a PlayStation 4 console, and a camera that’s sold separately. Prices for the camera range between about $44 and $59 depending on the retailer. Special controllers are also available.

What comes in the box?

Which games will be available for the PlayStation VR?

Sony says that more than 50 games will be compatible with the headset before the end of the year. Some compatible titles announced so far include RIGS Mechanized Combat League, Until Dawn: Rush of Blood, PlayStation VR Worlds, Eagle Flight, Rez Infinite, EVE: Valkyrie, Tumble VR, Robinson: The Journey, Wayward Sky, Headmaster, Superhypercube, and multiplayer party game The Playroom VR.

Sony has also said that a version of Star Wars: Battlefront will launch for the PlayStation VR, but it hasn’t specified a release date.

What will it be like to use PlayStation VR?

Some games will use the PlayStation’s DualShock or Move controllers, while others will rely on your body or eye movements. Extra players not wearing a headset will be able to participate in games as well, Sony says. The videos below provide an idea of what it will be like to game in PlayStation VR.

The PlayStation VR headset features a 5.7-inch OLED display and includes 360 degree tracking sensors, among other components. Here’s a closer look at the specs:

A more detailed overview of the hardware can be found here.

Can you do anything else besides play video games?

Sony’s VR headset also includes a Cinematic Mode, which allows owners to view 360-degree photos and videos on a large virtual screen. Any PlayStation 4 game that hasn’t been optimized for the PlayStation VR can also run on the headset in this mode. 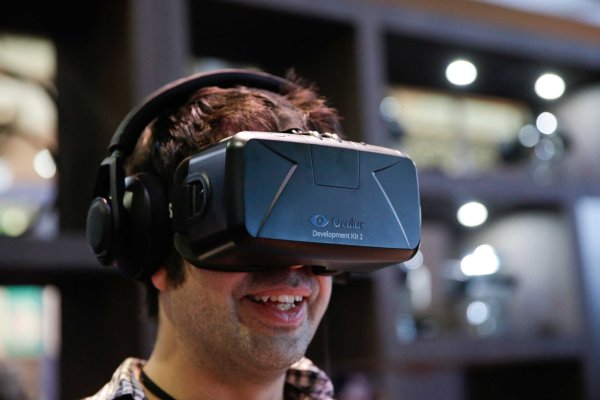 Here Are All the Oculus Launch Games in One Place
Next Up: Editor's Pick