Buddhist monks are offered food during a ceremony at their temple where a Thai army unit is also based in the troubled Yala province in southern Thailand on March 31, 2010
Damir Sagolj—Reuters
By Rishi Iyengar

Buddhism may preach abstinence and moderation, but close to half of the Buddhist monks in Thailand are obese, a new study has revealed, prompting the Southeast Asian nation’s government to initiate a wide-ranging health drive among its clerics.

The study revealed that 48% of the country’s monks are obese and face numerous physiological problems as a result, an academic directing the health-awareness campaign told the Bangkok Post.

About 10% of the clergy suffer from diabetes, while 23% have high blood pressure and 42% show excessive levels of cholesterol, the study further showed. They are often given foods laden with high fat and sugar content by devotees, which they are reportedly forbidden from refusing.

“Obesity in our monks is a ticking time bomb,” Jongjit Angkatavanich, the academic from the Faculty of Allied Health Sciences at Chulalongkorn University in Bangkok, told the Post.

The Thai government, which pays the monks’ medical expenses, reportedly spent in excess of $8.5 million on them in 2012 alone.

Jongjit and her university are spearheading the campaign to instill a healthy lifestyle in the monkhood, which includes nutrition training and physical-activity programs. Monks are also being encouraged to wear tight-fitting girdles around their waists to remind them of the need to lose weight. 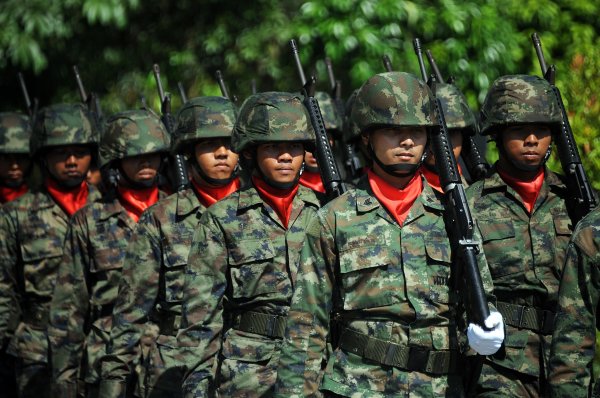 Thai Junta to Give Critics 'Attitude Adjustment'
Next Up: Editor's Pick