Harry Carson wasn’t surprised when he heard the news this week that a top NFL official, for the first time, acknowledged a link between football and chronic traumatic encephalopathy (CTE), a degenerative brain disease. Such a common sense remark was long overdue, given the evidence suggesting that such a link exists — from the fact that the brains of 90 of 94 NFL players examined post-mortem by a Boston University neuropathologist were found to have CTE, to the many stories of NFL players descending into the depression and behavioral changes that the disease can cause, with some even committing suicide. Carson, a Hall of Fame linebacker for the New York Giants from 1976 to 1988, felt relief but, above all, vindication. He was diagnosed with post-concussion syndrome back in 1990. Long before football’s concussion crisis became a public health issue in mid to late-2000s, he had argued that head contact from football contributed to his condition.

“People initially thought I was off my rocker,” says Carson. “But this really seals the deal. This is what the players have been waiting for. Just tell the truth.”

Many players have studied the risks, and a few, like former San Francisco 49ers linebacker Chris Borland, have chosen to retire — Borland was just 24 when he left the game last year — rather than put their brains in harm’s way. Still, the NFL has treated the idea of a link as taboo, even though a link implies a connection, not strict causation. The league’s obstinance at this year’s Super Bowl could be called comical, if it weren’t so maddening and the issue wasn’t so serious. Mitchel Berger, a neurosurgeon who’s a member of the NFL’s Head, Neck, and Spine committee, failed to acknowledge a link between CTE and football during a press conference. In a follow-up interview with TIME, Berger said that in his mind, the word link means “a one to one relationship between playing and getting CTE.” In other words, since not everyone who plays football gets CTE, there’s no link.

But on Monday, during a roundtable discussion convened by U.S. House of Representatives’ Committee on Energy and Commerce, Rep. Jan Schakowsky, (D-Ill.) pressed the point with Jeff Miller, the NFL’s senior vice president for health and safety. Schakowsky asked Miller whether “there is a link between football and degenerative brain diseases like CTE.” Miller responded: “the answer to that is certainly, yes.” A league spokesman released a statement Tuesday: “The comments made by Jeff Miller yesterday accurately reflect the view of the NFL.”

“About time,” says Hall of Famer Joe DeLamielleure, who played 13 seasons, from 1973 to 1985, as offensive lineman for the Buffalo Bills and Cleveland Browns. “I’m glad they finally admitted it. Now what are they going to do?”

Such is the NFL’s bind, now that it is no longer running from the truth. “Here’s the problem,” says Mike Ditka, the Hall of Fame player, former Chicago Bears coach and current ESPN analyst. “It’s football. You can’t take contact out of the sport, or you don’t have a sport anymore.”

Can football be made safer? Nate Jackson, a Denver Broncos wide receiver from 2003-2008, offers a novel idea: shorten the play clock, and do away with the huddle. This would tire the players out, draining their energy for high-impact hits. “It would involve self-preservation,” says Jackson. “Whereas now, there is no self-preservation involved on the football field. It’s more like self-sacrifice.” But football without any huddles? That’s like sand without grains. Such radical safety measures won’t come easy, if at all.

By acknowledging CTE risk, could the NFL harm the future of its game? “I think the drop in Pop Warner football will be greater moving forward,” says Carson. However, the game’s economic allure isn’t fading anytime fast.

Jackson doesn’t anticipate a rash of early NFL retirements, of the likes of Borland and Adrian Coxson (who retired, at 23, after suffering a Grade 3 concussion in his first training camp). “It’s not an immediate reality to players,” says Jackson. “Your brain doesn’t see pain. You might have CTE, you might not. It’s a concept, not a reality. It’s hard for guys to assess a risk like that, when they’ve been funneled on the field by adults from the time the were children. They’ve been rewarded for being good at football from the time they were probably 10-years-old. It’s really hard for them to separate themselves from what garnered them all that attention and success in the first place.”

There’s plenty of time to fret about the future. To former players, Miller’s words offered rare cause for hope on the football safety front. Now that the NFL has left the semantical haggling behind, football can just move on. Players of all ages can assess the risk, and make an informed decision on whether to play. When Isaiah Kacyvenski, a linebacker who spent most of his career from 2000 to 2006 with the Seattle Seahawks, and suffered several concussions, heard about Miller’s admission on a radio program Tuesday morning, he did a double take.

“I was like, what, is this a special day or something?” Kacyvenski didn’t see it coming. But he’s glad the NFL finally arrived. “It was really refreshing to hear,” says Kacyvenski. “Thanks for not playing us for fools.” 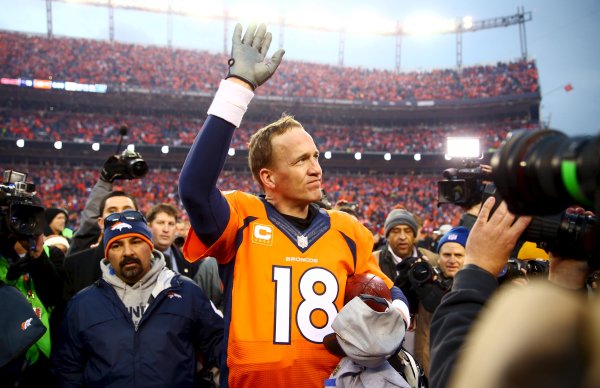 How Peyton Manning Fueled the NFL Boom
Next Up: Editor's Pick