Voters walk out of their precinct after voting as Ohio voters go to the polls for the Ohio primary March 15, 2016, at St George Church in Cincinnati, Ohio.
John Sommers—Getty Images
By Daniel White

If the Internet is any indication of success then Republican front-runner Donald Trump is going to have a goodTuesday, according to social media and search engine data.

Tuesday brings key primary contests in Ohio, Florida, North Carolina, Missouri and Illinois. Conversations on social media sites, such as Facebook and Twitter, and data from search engines may be able to shed some light on what voters have on their minds in each of today’s Super Tuesday states. Also included are predictions for each state from Bing, Microsoft’s search engine which makes predictions based on search data, weighted polling averages, social media conversation and predictive elections odds.

For Democrats, Sen. Bernie Sanders may see a surge in day of attention against front-runner Hillary Clinton, as he is the most searched for and talked about candidate in the past 24 hours, according to Google and Twitter. Clinton, however, is the most talked about candidate on Facebook in all five states and support for Sanders online has been deceptive at times this primary season.

Read More: What Google and Twitter Can Tell Us About 2016

Some 361 Republican delegates are up for grabs today and this could be the last chance for the GOP to stop Trump from clinching the nomination. In Ohio and Florida, both winner-take-all states, candidates John Kasich and Marco Rubio are fighting not only for their respective home states, but for the last bit of juice that will keep their campaigns alive. Kasich has picked up his share of the conversation on Twitter in the past day but he, Cruz and Rubio only account for less than 25% of the total conversation about Republican candidates on the platform.

Rubio has been gaining on Trump’s solid lead in Florida, according to a polling average from RealClearPolitics, but the Miami native appears destined for second place as the billionaire appears too far ahead. The number one issue for Facebook users in Florida is Cuba, which Rubio schooled Trump on at the last GOP debate. Trump, however, remains the most popular candidate in the state—in terms of the volume of searches on Google for him and Facebook chatter about him.

Kasich has held a lead over Trump in Ohio for most of March, but the billionaire is pummeling the Governor online. Searches for Trump in Ohio—good or bad—are outpacing those for Kasich, according to Google Trends. When it comes to candidates ranked on “how to vote” searches, Trump and Kasich are in first and second, respectively.

The top issue for Ohio voters on Facebook is education, which Kasich separated himself from the other candidates on at the last debate. Other issues Ohio is talking about are the economy, gender equality, abortion and healthcare.

The Illinois Democratic race may be one to watch. While Trump and Clinton have maintained leads in polls of state voters, the day of search interest favors Sanders however, according to Google, which may indicate a surge in support for Sanders.

In Illinois—where a group of protestors shut down a Trump rally in Chicago—race is the number one issue on the minds of Facebook users. Other top issues include Mexico, crime and criminal justice, gender equality and education.

Trump and Cruz may be in for a close race in North Carolina, according to Google. The two look to be locked in a dog fight online in a state where the top issues on Facebook are religion, government ethics, guns, terrorism and the regulations and size of the government. North Carolina is the only state on the GOP side Tuesday that awards delegates proportionally, so Cruz may be rewarded regardless of whether or not a second-place finish. 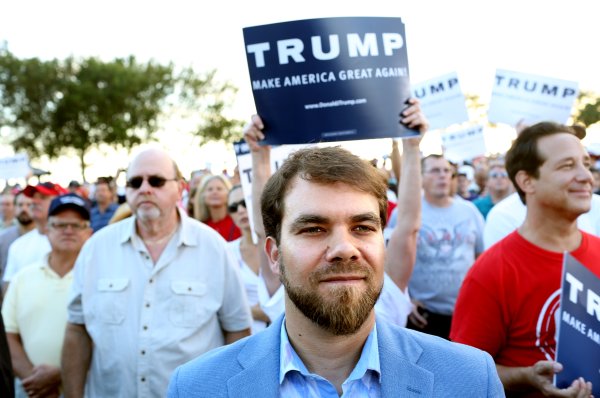