Nobel Scientist: I Place My Faith in Human Gods

James Watson, Nobel Prize of Medicine in 1962 and co-discoverer of DNA, at BioVision forum in Nobel Prizes and Biotechnology Gurus celebrate DNA Discovery's 50th Anniversary in Lyon, France on April 08, 2003.
Lionel Flusin/Gamma-Rapho—Getty Images
Ideas
By James Watson
Watson is an associate professor at University of Queensland and director of the Science and Research Initiative at the Wildlife Conservation Society.

Growing up on the South Side of Chicago in the 1930s, neither of my parents went to church. My modestly religious Irish Catholic mother had long ago stopped attending because of a rheumatic-fever-damaged heart. While my Episcopalian father said he had won “multiple prizes for youthful church attendance,” he started losing his belief in the existence of a supreme deity as early as his freshman course on the Bible at Presbyterian Oberlin College.

I only followed my mother’s wish to accompany my very religious grandmother to Sunday mass at nearby Lady of Peace Church for a few years. By age 11, just a year after my First Communion, I, too, stopped going to services, rejecting the need for an all-knowing God-like creator of our physical world. Following my dad, I saw the pursuit of scientific and humanistic knowledge as the best route toward successful living on Earth.

Earlier human civilizations created religions to explain how life came into existence and to provide written rules (e.g. the Ten Commandments) for the social interaction between humans. Today, Darwinian evolution and DNA-based genetics provide a very compelling alternative framework for advancing the human condition through science. While science does not yet, and possibly never will, understand how the first forms of life came into existence, most scientists see no need to postulate the existence of God-like entities.

So I was surprised when I was recently asked about the role that faith had played in my life. The obvious sincerity of the questioner demanded more than a reply that I am a lifelong atheist. I answered that faith was essential to my life, but it was not faith in an all-powerful, life-instructions-providing God. Instead, I place my faith in the unchanging, universal aspects of human nature that have allowed us to work together as social animals to constantly improve our existence.

Our ancestors’ existence depended upon close cooperation with other humans, particularly when foraging together or defending against dangerous predators. Expectations of reciprocal fair play, and the capacity to detect cheating in others, have furthermore been shown in children as young as 3. This likely tells us that ethical systems exist in young children.

Religion, however, has often gone against this human instinct to support others. Throughout history, religious edicts have been at the root cause of much human violence. The attacks of Jihads of the Muslim faith are the prime example of today. A thousand years ago, Christian crusaders, in their eventual unsuccessful attempt to reclaim the Holy Land, killed vast numbers of innocent people. That the Christian teachings on behavior are today so much better aligned to our altruistic human nature reflects the ever-diminishing attention paid to the wishes of the supreme God of the Old Testament. The unique positive essence of Christianity now resides in the Gospels where Jesus instead reigns supreme.

All through my daily life I have tried to act as a caring, ethically concerned scientist aiming to enhance society. I never go to Sunday services; I don’t need sermons to maintain my secular Christianity. Nowadays my God-rejecting views are much more broadly accepted by educated men and women than when World War II ended and my father would have seriously jeopardized his job in business if he ever publicly expressed the atheistic view he passed on to me. The emptying of mainstream Sunday services, except among evangelicals, suggests to me that the fear of going to hell has effectively disappeared from the psyche of many Americans under the age of 50.

Are we condemned as Americans to become so evermore self-oriented that we soon will lack the capacity to work for the public good in projects such as maintaining our public highways much less working toward curing cancer?

When Abraham Lincoln issued the Emancipation Proclamation on New Year’s Day 1863, he let it be known that he was following God’s wishes. But then, as all through his life, Lincoln followed no religion, and so what he effectively was saying was that his brain (where human nature resides) would not let him act otherwise. Most important, the majority of Americans then shared his view, and the Union stayed together. The human nature that allows us to work together and the degrading brutality of human slavery were incompatible.

Increasingly, religious sermons must embrace the moral challenges of the present and address the need for more leaders like Jesus who encourage us to be more altruistic than selfish. Hopefully Pope Francis, as today’s truly super hero of the world’s downtrodden, will have many more years to project his Jesus-like calls for Mercy. Assessing past and current leaders of the Western World for their Jesus-like attributes makes me more than anxious about this year’s elections. When a Bernie Sanders presidential campaign flyer recently asked me for $45, it was his appeal to fundamental fairness and Lincoln’s “better angels” that came to mind. I replied with a $1,000 check. 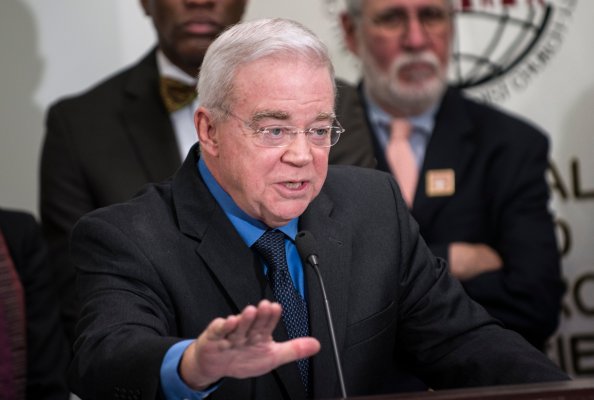 An Easter Prayer for America
Next Up: Editor's Pick