In the Eyes of a Young Syrian Refugee

An 11-year-old Syrian refugee named Ahmed waits in line for a map directing asylum-seekers north at an encampment near the Greek village of Idomeni, March 4, 2016.
Ali Ali
By Andrew Katz

This is Ahmed from Syria.

What began as a transit camp near the Greek village of Idomeni has metastasized into a squalid, disease-ridden tent city. Many have been there for weeks, hoping for a chance to soldier through the Balkans on the well-trodden path to western or northern Europe. A U.N. official recently described the scene as “just not a place that is fit for humans.”

Read next: Inside the Harrowing Night Hundreds of Refugees Tried to Escape Greece

Ali Noureldine, a photographer based in Cologne, Germany, recently returned from the camp. Represented by laif photo agency and known professionally as Ali Ali, he made his name with EPA documenting daily life in Gaza, the coastal enclave of 1.8 million Palestinians. “I’ve seen many camps in Gaza, in Europe, even, but not like that,” says Noureldine. “Many people don’t have tents so they sleep on the street, or under trees. For me, it’s not a camp.”

Noureldine met many children there. One morning, he came across a small line of people waiting for maps of the region. There was Ahmed, squatting, exhausted. He was wearing muddied boots and layers of clothes, huddled under a blanket. He had a few cuts on his face. Noureldine made a several pictures, including the portrait above, and then slowly walked up to him.

“He had beautiful eyes, but sad eyes,” Noureldine says.

The boy was traveling with his family. After Noureldine said he lived in Germany, Ahmed said that was his destination. He hadn’t been in school in a year, but said he wanted to continue his studies in Germany—“to live like the other kids, to be like them.”

Noureldine told the boy not to worry, that everyone would get to cross. He smiled. Even if that wouldn’t be true, at least yet, Noureldine says, “you have to give them some hope that the life they seek is really good, and that [they’ll] find the life [they] deserve.”

Ali Noureldine is a photographer based in Cologne, Germany, and represented by laif. Follow him on Instagram @alinoureldin. 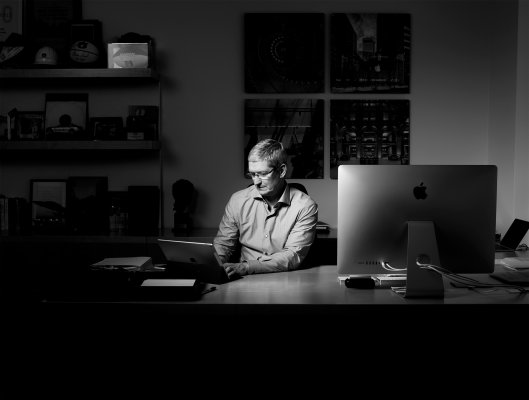 Behind TIME's Cover Shoot with Apple's Tim Cook
Next Up: Editor's Pick