Democratic presidential candidate Hillary Clinton attends a "Get Out the Vote" event at the Chicago Journeymen Plumbers Local Union in Chicago on March 14, 2016.
Justin Sullivan—Getty Images
Ideas
By Deborah Tannen
Tannen is the author of You're the Only One I Can Tell: Inside the Language of Women's Friendships

President Barack Obama recently commented that in 2008 Hillary Clinton had to do everything he did, but she had to get up earlier to have her hair done. This contrast, which applies in today’s campaign as well, is the metaphoric tip of a multifaceted iceberg of challenges facing Clinton because she’s a woman. Obama went on to note that the media unfairly “called her out” for being tough, while ignoring similar toughness on his side. That, too, can be traced to the double bind that confronts all women in positions of authority. These forces combine to explain why so many people see Bernie Sanders as more authentic and Clinton as less trustworthy.

Let’s start where Obama did: the burden placed on women by the focus on their appearance. Yes, Clinton must take time to have her hair styled, and even more time having it dyed and applying makeup. She also has to shop for, and then select from, a closetful of outfits—carefully! Sanders, like all male candidates, has only to make sure he has a dark suit, clean shirt and reasonable tie handy. He could easily wear the same suit and tie day after day, but she must wear a different outfit at each debate, while wearing shoes that are less comfortable and harder on her back. The real dilemma, though, is that the range of options from which a woman must choose—styles, colors, lengths, how much skin to expose—is so vast, that any choice she makes will strike many viewers as not the best, providing fodder for criticism and ridicule.

Which brings us to Obama’s second point, the press. All public figures are subject to criticism and attack, but Clinton has been subject to more, and Sanders to less, than most. For one thing, she is widely expected to be the Democratic nominee, so why bother wasting effort scrutinizing him? That Sanders has a son whose mother he never married has received so little attention that most people don’t even know about it. This is as it should be. But what are the chances that a woman would be given a pass under similar circumstances?

Clinton has been in the public eye for so long, journalists have long since formulated a storyline about her, as former Democratic presidential candidate Michael Dukakis recently observed. Their view—and portrayal—of her as “remote and programmed,” he said, is “nonsense” and impervious to accounts by those who know or meet her that she is actually warm, smart and funny. Political opponents have had decades to dredge up (or fabricate) accusations, with a smoke-there’s-fire (you might say blame-the-victim) result. Whitewater! Benghazi! Email! After endless investigations, each accusation has turned out to be groundless. Yet the impression remains: she’s been the object of so many accusations and investigations, she must be doing something wrong. Hence the impression she’s not trustworthy.

There is also a self-fulfilling prophecy element to Clinton’s long history with the press. Part of the reason that they see, and depict, her as stiff and measured (and therefore inauthentic) surely is what she herself said recently: she’s not a natural politician—something that is as ironic as it is obvious, since her being a seasoned politician is one of the main criticisms raised against her. But another part of it, no doubt, is that she has had so much experience having her words and actions turned against her, it’s no wonder she might be cautious in choosing them. And this, too, started with her hair.

When Clinton first appeared on the national stage back in 1992, the young wife of the Arkansas governor running for president, she kept her natural-brown hair off her face with a headband. This sparked an avalanche of criticism, so she colored her hair and had it styled, which led to a new round of accusations: she was nefariously manipulating her image! Other damned-if-you-do, damned-if-you-don’t attacks were also particular to her as a woman. Because the Clintons kept their small daughter out of the public eye, polls showed that people thought they were childless, a condition that stigmatizes women. When evidence emerged that Clinton was a devoted mother, Margaret Carlson writing in TIME found her guilty of “yuppie overdoting on her daughter.”

All these forces have played a role in Clinton being seen as inauthentic and untrustworthy. And they are all related to the double bind that confronts women in positions of authority, as I recently wrote in the Washington Post. A double bind means you must obey two commands, but anything you do to fulfill one violates the other. While the requirements of a good leader and a good man are similar, the requirements of a good leader and a good woman are mutually exclusive. A good leader must be tough, but a good woman must not be. A good woman must be self-deprecating, but a good leader must not be.

Sanders is appealing when he comes across as tough by railing against Wall Street and corporations, and as comfortingly homey and authentic with his rumpled clothes and hair and down-home Brooklyn accent. When Clinton is tough, a characteristic many see as unfeminine, it doesn’t feel right, so she must not be authentic. And a disheveled appearance would pretty much rule her out as an acceptable woman. As Robin Lakoff, the linguist who first wrote about the double bind confronting women, put it, male candidates can have it both ways but Clinton can have it no ways.

The most difficult aspect of the double bind is that it is invisible; we think we are just reacting to the candidates as individuals. Yet even the words we use to talk about women, as compared to men, come drenched in gender. This is as true for journalists as for voters in conversation. For example, joining a chorus of praise for Clinton’s performance in the first Democratic debate, New York Times columnist Frank Bruni used words that undercut her authority. He began by characterizing her as a “seamstress” because she “threaded the needle as delicately and perfectly as a politician could.” Sewing clothes and threading a needle require skill and dexterity, but the metaphor feminizes—and trivializes—the tasks for which these skills are suited. Bruni ended by calling Clinton a “sorceress” because she came across as forward-looking and energetic despite her “many decades in the political trenches.” The word “sorceress” not only diminishes with its –ess ending (would you entrust your life to a doctoress?), but also evokes a long history of demonizing (literally) powerful women as witches.

There is probably no such thing as a level playing field in political campaigns. But the field on which Hillary Clinton is playing is far bumpier than Bernie Sanders’ because she’s a woman. 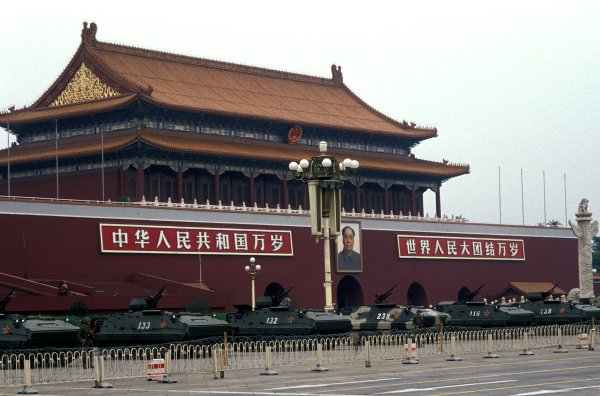 Tiananmen Protester: Donald Trump Sounds Like a Communist
Next Up: Editor's Pick