Hans Sues, Chair of the Department of Paleobiology of the Smithsonian Institution's National Museum of Natural History, holding a cast (right hand) of a Tyrannosaurus Rex tooth for comparison with an actual tooth of the new tyrannosaur Timurlengia euotica that was found in the Kyzylkum Desert, Uzbekistan, in a photo provided by the Smithsonian Institution on March 4, 2016.
James Di Loreto—AFP/Getty Images
By Maya Rhodan

Scientists have discovered clues to a new dinosaur that reveals new details about the Tyrannosaurus Rex we’ve grown to appreciate (and fear).

It seems the Tyrannosaurus-Rex wasn’t always the towering, menacing creature with a massive head and razor-sharp teeth that we’re familiar with. Fossils discovered in Uzbekistan by Smithsonian paleontologists show that there was a smaller, more slender dinosaur in the tyrannosaurus family called the Timurlengia euotica.

The small dinosaur is believed to have lived around 20 million years before the Tyrannosaurus Rex—though “small” is relative; according to a Smithsonian Magazine report on the findings the dinosaur was about the size of a horse.

The early ancestors of the Tyrannosaurus Rex were much smaller in size—though just as sharp in smarts with their keen olfactory and visual abilities. 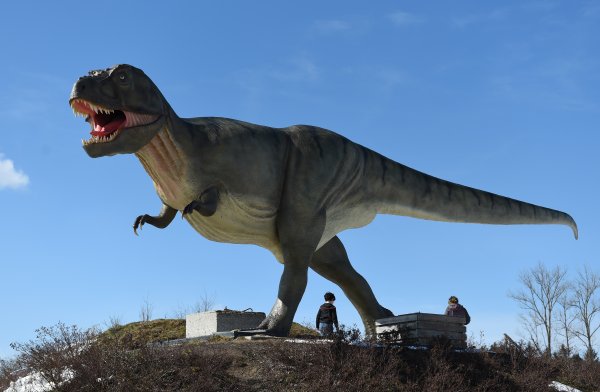