Germany's Right Wing Gets a Shot at Legitimacy After Merkel's Setback

German Chancellor Angela Merkel was stung by the results of three regional elections on Sunday, but the wonder may be that she and her Christian Democrats party fared as well as they did.

Returns in three regions showed a surge for Alternative for Germany (AfD), a populist, right-wing party energized by public resistance to the flow of Middle Eastern asylum-seekers and other migrants across the country’s borders. It was the first win for the newfound party, and analysts said the regional wins increased the odds of qualifying for seats in the national legislature in 2017, when national elections are scheduled.

That naturally raises alarm bells for some. The words “right-wing party” and “Germany” provoke unsettling historical associations, as kept alive in the popular imagination by war movies and The History Channel. But the memories have little to do with a modern Germany that elected Merkel three times, and has never ceased to acknowledge its responsibility for the worst horrors of World War II.

“In many ways, Germany is the opposite of what it used to be,” Hans Kundnani, a senior fellow at the German Marshall Fund told me over lunch in Berlin last November, when I was reporting on Merkel for the TIME’s 2015 Person of the Year issue. What Germans built from the rubble of the Third Reich is a liberal, democratic society, with Europe’s strongest economy and a rich recent history of accepting newcomers, both immigrants and asylum-seekers.

What it has not much accommodated is political dissent from the right. Consider that Merkel’s Christian Democrat Union (CDU) is the most conservative in the Bundestag, as Germans call their parliament. Its economic policy is free-market capitalism, which in Europe at least is indeed right-wing, but on issues such as the environment the party rules from well left of center — Germany has pushed for more ambitious carbon emissions targets, and Merkel scrapped Germany’s nuclear program after Fukushima.

The CDU’s governing partner is the center-left Social Democrats, which in a “grand coalition” with the center-right Christian Democrats leaves only the far-left Green Party and the Left Party out of the cabinet — and the leftists have their own history of political violence. The Green Party originated on the streets along with the rest of “the extra-parliamentary opposition” in Germany during the 1960s and 70s, Kundnani says. Along with marches it produced violent groups like the Bader Meinhof Gang and Red Brigades.

As Syrian and other migrants poured into Germany last year, rising levels of violence followed — as in the hundreds of attacks on sites housing asylum-seekers. Many feared a return to the bad old days if German politics did not provide an outlet for dissent grounded in debate and representation.

And that, wisely, is all the head of AfD claims it wants. “Yes we have to talk about what Germany is supposed to look like in ten years and twenty years time,” Party leader Frauke Petry told foreign reporters before Sunday’s voting. “We want to let the public participate in that discussion. We don’t want to leave this discussion to politicians and parliament alone.”

Petry, who like Merkel hails from the former East Germany, where resistance to migrant inflow has been strongest, rails against Germany’s political orthodoxy, which equates left with good and right with bad. She also expressed irritation when asked about an interview in which she suggested that border guards may have to shoot migrants trying to enter the country.

Merkel has thrived in a country that places great value on consensus. But for her first ten years in office, one of the most persistent criticisms of her governance was that it covered so much of the political middle ground that it “sucked all the oxygen” out of politics. And as AfD upped its presence in state legislatures to eight of 16 on Sunday, there were more calls from the center-right to cut off its supply.

“There should be no democratic alternative to the right of the CDU,” said Reiner Haseloff, premier of the Saxony-Anhalt state. The way to keep German’s conservative voters in the fold, Haseloff said, was to stem the flow of migrants at the border. “We cannot keep going as we are.”

But despite the electoral shock, Merkel was having none of it. “The federal government will stay its refugee policy course … at home and abroad,” her spokesman Steffen Seibert told reporters Monday. Abroad, Germany is leading the European Union effort to seal a deal that would send thousands marooned in Greece back across the Aegean to Turkey. At home, the question is whether Germany’s postwar democracy can accommodate not only hundreds of thousands of asylum-seekers, but the new political reality they bring. 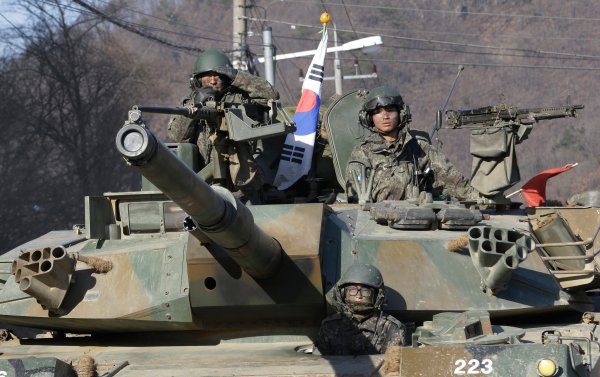 These 5 Facts Explain the Increasingly Tense Geopolitics in Asia
Next Up: Editor's Pick