For Donald Trump, the protesters that are increasingly emboldened at his rallies are a point of amusement, if not outright pride.

“Every five minutes or so,” he brags of his interruptions. His math was spot-on. Over the course of 39 minutes in Cleveland on Saturday afternoon, he drew eight separate interruptions that caused his supporters to circle the protesters and chant “Trump!”

“Get ‘em the hell out,” Trump said in a cavernous exhibition hall, a day after security worries forced him to cancel an event in Chicago. As always, Trump cast himself as the victim.

“We had a little bit of a problem,” Trump said of the clashes in Chicago. “We were not allowed to exercise our First Amendment rights.”

That tensions are so high now, as Trump is on the cusp of becoming the undeniable Republican nominee, speaks to the business mogul’s success. Trump’s supporters feel victorious, that they’ve finally won over the Establishment. Why would Trump’s critics bother if he weren’t winning? Trump opponents look on in horror as the foul-mouthed former reality TV star insults his rivals and assures national audiences that his penis is adequate. Democrats are eyeing Trump as a wonderful opponent to run against this fall.

“All over the world, they’re talking about what’s happening,” Trump said in an understatement for the ages. It’s been a half-century since such civic-minded violence has broken out in the United States, with a leader like Trump occasionally goading them on. The rage is escalating, and Trump’s campaign has no interest in tamping it down.

“People are rioting in the streets,” said the Rev. Darrell Scott, a senior pastor at Cleveland Heights’ New Spirit Revival Center and a Trump supporter. “Our streets are not safe.”

Trump’s campaign rallies are not your typical events. Where Republican rivals Ted Cruz and Marco Rubio have well-polished speeches, Trump’s remarks are free-wheeling thought exercises on those who have wronged him (the media, his opponents), those he would punish (ISIS, Mexico) and those he would help (the working-class voters that are plentiful here in northeast Ohio). His chief challenger here, Ohio Gov. John Kasich, often turns his campaign events into town hall meetings to take voters’ questions. Meanwhile, Trump has to tell his crowds not to rough up detractors. The standard welcome at his events includes this recording: “Please, do not touch or harm the protesters.”

Those protests have been escalating. Violence between his supporters and opponents has broken out at his rallies. The Secret Service made the highly unusual move to envelop Trump mid-speech in Dayton during a Saturday morning rally as one protester attempted to storm the stage, and security is typically tight.

“My people aren’t violent. It’s these people who come in,” Trump said. “My people want to do one thing: Make America great again.” He repeatedly blamed Bernie Sanders’ campaign on the interruptions. “Bernie, get your people in line,” Trump said, vastly overstating the Sanders campaign’s organizational skills.

And yet Trump’s audiences are rather blasé about the whole affair. “He appeared to be a much gentler person in person,” said Ken Demers, a Medina, Ohio, resident who shrugged off Chicago’s violence and the protesters in Cleveland. “That was all George Soros,” he continued, blaming the liberal billionaire for Chicago’s protests. “He’s coordinating with the Democrats and the Establishment Republicans.”

Trump’s crowds, indeed, are convinced that this is an effort to sabotage their candidate—and are vowing to campaign harder and shout louder to help get Trump to the White House. “He’s talking about making America great again,” said Natalia Lesko, a 50-year-old Novelty, Ohio, resident who has internalized Trump’s slogan as Gospel. “There is nothing that these protesters can say to change my mind. Trump is my guy.” 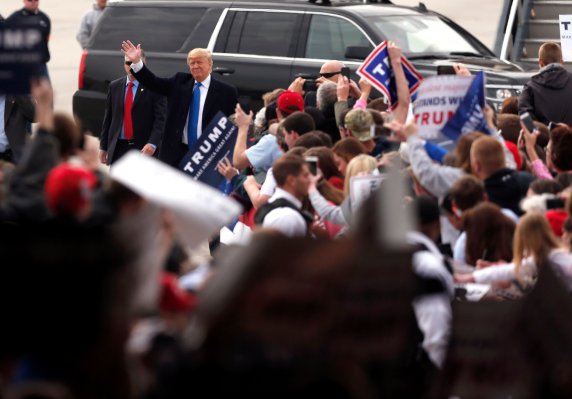 Protester Tries to Storm Stage at Donald Trump Rally
Next Up: Editor's Pick