A protester appeared to attempt to storm the stage at Donald Trump’s campaign rally outside of Dayton, Ohio on Saturday, one of a number of escalating protests during the event and a continuation of the turmoil that marked Trump’s cancelled rally in Chicago on Friday.

Agents from the U.S. Secret Service briefly jumped to the stage to surround a seemingly rattled Trump.

“I was ready for him, but it’s much easier if the cops do it,” Trump said when returning to the microphone,

The event comes a day after Trump cancelled a rally in Chicago, citing security concerns, as fights broke out between protesters and supporters at the venue.

“If there’s a group out there, just throw them the hell out,” Trump said when his rally in an airport hangar was interrupted for the first time by a protest.

“My people were nice, the people that came there were so nice,” he said. “They caused no problem. They were taunted, they were harassed by these others.”

“All of the sudden a planned attack just came out of nowhere,” Trump added. Earlier on Saturday, Trump tweeted that “thugs” were to blame for the violence in Chicago.

Trump said some of the protestors “represented Bernie [Sanders], our communist friend,” referencing that some were carrying signs supporting the Democratic contender. 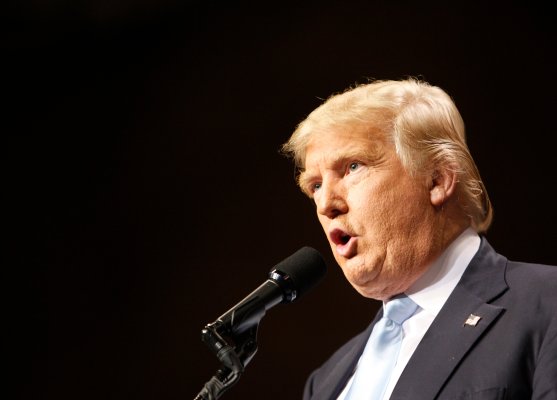