Vitali Klitschko , an opposition leader, visits the barricade on Hrushevskoho street in the morning to adress protesters on January 23, 2014 in Kiev, Ukraine.
Etienne De Malglaive—Getty Images
By Sam Frizell

“The only way to win is by nominating a single candidate from the democratic ranks,” Klitschko said at a meeting of the United Democratic Alliance for Reform, the Associated Press reports. “This should be a candidate with the greatest support from the people.”

The former boxer isn’t dropping out of politics altogether — he said he’ll run for mayor of Kiev in a bid to turn the city into a “truly European capital,” the New York Times reports.

Before Ukraine’s recent turmoil, Klitschko was most widely recognized for his boxing stardom. He soon gained even more international notoriety after taking a major role in last year’s opposition protests in Kiev. His endorsement of Poroshenko could launch the billionaire to a leading place in the May 25 election.

Poroshenko is set to campaign against Yulia Tymoshenko, a charismatic and controversial veteran politician who spent more than two years in prison under deposed President Viktor Yanukovych. Tymoshenko declared her candidacy for president on Thursday.

Ukraine’s preparations for the May 25 elections take place amidst the greatest political crisis in Ukraine’s post-Soviet history, following the Russian invasion and annexation of Crimea. U.S. President Barack Obama and Russian President Vladimir Putin spoke on the phone Friday evening to discuss a possible diplomatic solution to the crisis in Ukraine even as Russian troops amass on the Ukraine’s border. 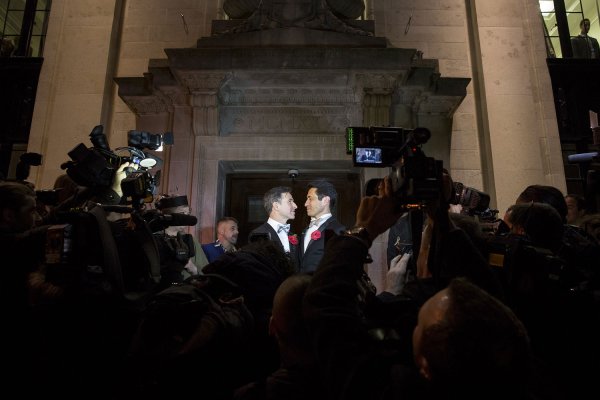 First Couples Wed in U.K.
Next Up: Editor's Pick