Shonda Rhimes and the stars of her TGIT lineup are voicing their support for Hillary Clinton in a new video released by the presidential candidate.

The ad features Rhimes alongside Scandal’s Kerry Washington, Grey’s Anatomy’s Ellen Pompeo, and How to Get Away With Murder’s Viola Davis. It was directed by Washington’s Scandal costar Tony Goldwyn.

In the clip, the Shondaland leading ladies describe the characters they play as “brilliant,” “complex” women who fight for justice and give voice “to the voiceless.” “Our characters are on television,” Washington says. She and the others then add, “The real world has Hillary Clinton.”

Rhimes, Davis, Pompeo, and Washington each take turns speaking as they praise Clinton as “a bonafide, rolls up her sleeves, fights for what’s right, in it for you, won’t back down champion for all of us.”

“So proud that I am with her because she is with US,” Rhimes tweeted Thursday night, sharing a link to the ad.

Clinton replied, “Talk about a power lineup. Thank you for being on this team!”

An ABC spokesperson issued a statement on the ad Thursday night, saying, “This was a paid political advertisement placed on a number of stations. Broadcasters are required by the FCC to carry these ads.” 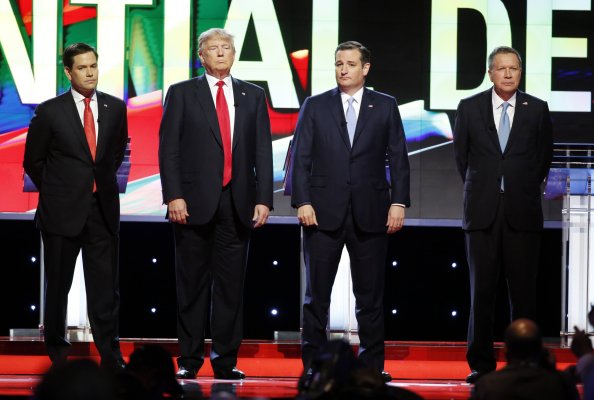 Republicans Pull Their Punches at Debate
Next Up: Editor's Pick