In 10 Cloverfield Lane, out March 11, Mary Elizabeth Winstead plays a young woman navigating between two threats: a mysterious event that has deemed the outside world uninhabitable and the not-quite-trustworthy man (John Goodman) who claims to have rescued her by sequestering her in a bunker. The J.J. Abrams-produced sci-fi suspense flick was kept, in typical Abrams fashion, closely under wraps—to the point where even Winstead didn’t know it was so closely linked to its spiritual predecessor, 2008’s Cloverfield, until the trailer dropped in January.

Winstead, whose resume includes a rare blend of horror hits (Final Destination 3, Abraham Lincoln: Vampire Hunter) and nuanced indie fare (Smashed, Alex of Venice), brings a refreshingly steely charm to her everyday heroine in distress. She spoke to TIME about the rarity of finding a leading female role devoid of stereotypes, the perks of acting opposite Goodman and how she might fare in a real doomsday situation.

TIME: It must be a rare experience to have the audience know so little going into your movie.

Mary Elizabeth Winstead: I would say so—except for the movies I’ve been in that people didn’t know anything about because nobody ever saw them! It’s a rare thing for it to be so quiet for so long and to have it explode with this curiosity. I’m used to things when they’re quiet, staying quiet.

What kind of physical training did you do to prepare to play a total badass?

What I started to do in my off-hours was to put in a little time at the gym, because I’m not particularly a gym rat. Nothing crazy—a bit of weightlifting and cardio just to make sure I didn’t collapse halfway through shooting. I knew that once I was there, it needed to feel like this real girl who doesn’t have any special skills. She’s not a martial artist, she doesn’t come from any background where she would be more capable physically than anyone else, other than the fact that she’s just a tough girl.

How often do you read parts where you think, “That woman is a total badass?”

Very, very rarely. It’s rare to read parts with female leads in general when it comes to more mainstream fare, so that in and of itself was a rarity. When you get a script and it’s a female lead, you’re just hoping for the best—“Please let this be good, please don’t let this be stereotypical”—but you’re expecting those things because you’re so used to reading that kind of stuff. With this, every page was like, “She’s so cool, she’s still really cool, she’s smart, she’s interesting, she’s mysterious!”

She experiences a lot of fear, but she’s never a damsel in distress.

That was something part of me thought was to good to be true at first. There were a couple things in the script that I called out to [director] Dan [Trachtenberg] and J.J. I was like, “What are you trying to do here? Why is she in her underwear?” I was so afraid that something that I hoped would turn out so good would be derailed by one scene that wasn’t handled right. But they were coming at it from the perspective of really being in Michelle’s shoes, and I could feel that. It wasn’t these guys objectively looking from the outside at this woman in peril.

The idea of a movie getting derailed by one scene speaks to the level of scrutiny audiences sometimes have when we see a character we think we can label as feminist, and then if one thing doesn’t meet expectations…

Absolutely. It can crumble. And that’s something I do feel, a bit of pressure—or maybe responsibility is a better word—trying my best to uphold what I think are good standards in terms of how we see women. But it can be hard. Sometimes those things can be out of your control as your actor.

People talk a lot about building trust on set between actors, but here you had to build distrust. How did you go about doing that with John Goodman?

I didn’t know until we’d been doing all these interviews and I heard him say that he intentionally isolated himself from me as much as he could during the shoot so we couldn’t get too familiar. I had thought he was just a shy, quiet guy. In the downtime he would go off in his own direction, which—he’s John Goodman and you want to respect his energy and his privacy—so we didn’t become the chummiest, but we had a fantastic working relationship. He was the most generous actor maybe I’ve ever worked with. Anytime the camera was just on me, he would be cranking up his performance to 11, even though it didn’t matter. As an actor, that’s just one of those things you appreciate so much.

Your character has a very vague background. Did you create a backstory for her?

With Michelle, it was really important to have a backstory. There’s so much going on with her that the audience doesn’t know, but it has to feel really full and rich in every moment. There’s a couple of windows that you get into her life, and those things were shot towards the end because they were such continuous discussions. We wanted it to feel really specific to me and what I was bringing to Michelle. Dan and I had a lot of conversations about who she was and how we could tell the audience that without going too far.

You’ve gone back and forth between bigger-budget movies and indies. Do you foresee continuing to move between them?

That would be my goal. The great thing about 10 Cloverfield Lane was that it was kind of a hybrid, and I got to feel like I was doing this little indie character piece and on other days getting to live out this action hero fantasy. The indie movies are about learning and growing as an actor. And in terms of the bigger stuff, I really want to connect with an audience, and I want people to see the films that I do, so I don’t want to just disappear into indie-land.

Since making this movie, have you packed your “go bag” and prepared for the apocalypse?

I’ve just come to realize how unprepared I am. I’d probably be the first to go. All I know how to do is act. I have no other life skills and I’m totally not prepared. 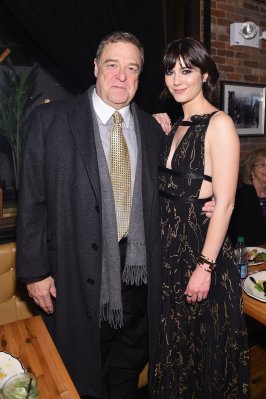 Everything You Need to Know About 10 Cloverfield Lane
Next Up: Editor's Pick