Although the sprawling refugee camp on the Greek border with Macedonia is quickly turning into a humanitarian nightmare—with around 12,000 migrants refusing to leave until the border, on Wednesday, reopens—the Greek authorities have ruled out the use of force in trying to deport them or move them to organized shelters, the government official coordinating Greece’s response to the refugee crisis says in an exclusive interview with TIME.

“The only plan is to persuade them,” says Dimitris Vitsas, the Alternate Minister of Defense, speaking in his office in Athens. “There is no plan of violence. We will not use force.”

As countries along the refugee trail through Europe shut their borders, Greece is preparing for an indefinite battle of wills with the migrants stranded near the village of Idomeni, which has become the latest flashpoint in Europe’s refugee crisis. On Monday, the leaders of the European Union and Turkey announced an ambitious plan to stop the tide of asylum seekers—mostly from Syria, Iraq and Afghanistan—from reaching wealthy European states like Germany, which took in more than a million of them last year. Under the plan’s provisions, Greece would have to send back the migrants who reach its shores by boat from Turkey, while Turkish authorities would have to stop the boats from departing toward Europe.

Since the plan was announced, however, the number of rafts reaching Greece has spiked, suggesting that Turkey is not holding up its end of the bargain. As part of the deal agreed in Brussels on Monday, says Vitsas, “The promise of Turkey … was that they will bring down to a minimum the number of people passing. That isn’t happening.”

Read More: Obama’s Refugee Plan Is Off Track and Insufficient

Only about 700 asylum seekers reached the Greek islands from Turkey on the day of Monday’s summit, down from a steady average of about 2,000 per day in the previous week. But the following day—once Turkey had won a number of concessions from the E.U. in Brussels, including 6 billion euros in financial aid—the number of arrivals doubled to about 1,500, Vitsas says. The day after that, it jumped by another 50% or so, bringing the daily total to 2,372 in the 24 hours that ended at 8:00 AM on Thursday.

Vitsas, who is one of the leaders of the left-wing Syriza party of Greek Prime Minister Alexis Tsipras, did not blame Turkish authorities for the surge. It could have been the fault of migrant smugglers, he says, as they try to push through as many of their clients as possible before the Greek and Turkish coast guards, along with the warships of the NATO alliance, seal off their maritime border as part of the plan agreed on Monday.

A boy waits in the rain for soup in a makeshift camp for migrants and refugees near the Greek village of Idomeni, on the Greek-Macedonian border, March 9, 2016.
Dimitar Dilkoff—AFP/Getty Images

But whatever the cause of this week’s influx, Greece will have to deal with it alone. The Balkan countries to the north have shut their borders to migrants over the past two weeks, leaving about 42,000 of them stuck in Greece as of Thursday morning. Nearly all of them are intent on reaching Germany, often to reunite with friends or family who needed only a week or two to complete the same journey while the borders were open to them last year. Many of the stranded asylum seekers simply refuse to accept that the passage has been closed. “Each one has the hope,” says Vitsas, “that there will be a moment when the gate will open, the borders will open, and he will be the lucky one, with his family, and will pass the border and then the next border and the next, and in a month he will go to the promised land.”

The task of ruining that hope, and dealing with the consequences, has now fallen to Vitsas and his beleaguered colleagues in the Greek government. Since last week, he has chaired a new ad hoc committee of government ministers responsible for dealing with the refugee crisis, among them the ministers in charge of the police, the military and various social services.

By the end of next week, the Greek army will be focused on building enough shelters to accommodate 20,000 more migrants all over Greece, bringing the total number of available beds to 50,000. That task is relatively straightforward, says Vitsas. “The hard part is: How do you convince the refugees that they must take the bus to go to a proper camp.” To most asylum-seekers, that would mean abandoning the hope of reaching Germany and facing the prospect of remaining in a Greece that has major economic problems of its own. “And the refugees know that we have an economic crisis in Greece, and they can’t find jobs for a long time in Greece.”

Rather than moving to one of the spacious and well-equipped shelters that Greece has set up near its northern border, thousands of migrants have therefore chosen to sleep in the squalid shantytown near Idomeni. In the last few days, heavy rains and thunderstorms have turned the camp into a giant field of mud. Brawls have become commonplace whenever charities arrive at the camp to distribute food, and its residents have grown increasingly desperate in demanding that the border reopens. On Feb. 29, hundreds of the asylum seekers at Idomeni tried to break through the border fence, and the Macedonian police responded with tear gas canisters, some of which were shot directly into the crowd.

Greece will do everything possible, says Vitsas, to prevent such scenes from recurring. His committee plans to distribute Arabic-language pamphlets, explaining that the border is closed and that far more comfortable conditions are available to them in nearby shelters. “But most people don’t listen to that,” he admits.

On Thursday morning, he ordered shipments of gravel to be sent to Idomeni, so that the refugees can at least put their tents on something other than the mud and dirt. He realizes, of course, that this will only give the camp a feeling of permanence. “That’s the problem,” he says. “That’s my problem.” And even with all the resources of the Greek state at his disposal, he hasn’t figured out a way around it, because the problem lies in the will of the migrants themselves. 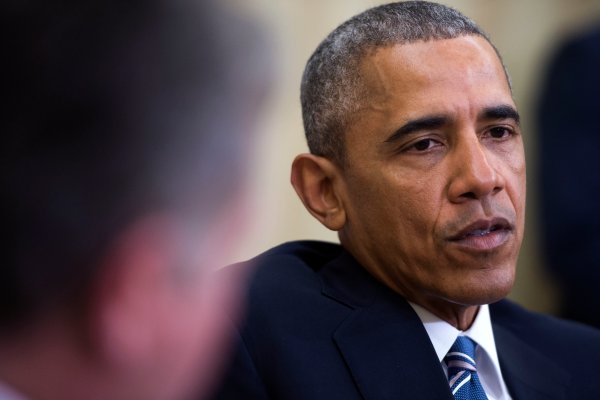 Obama's Refugee Plan Is Off Track and Insufficient
Next Up: Editor's Pick