A 1964 Ad Could Predict the Democrats' Plan to Fight Trump

A 1964 campaign ad for Democratic President Lyndon Johnson against Republican nominee Barry Goldwater, which recently resurfaced online, might foreshadow how Democrats would campaign against current Republican frontrunner Donald Trump in a general election.

Goldwater, who ultimately lost to Johnson in the ’64 election, has often been compared to Trump because his positions at the time were well outside of the Republican mainstream.

In an ad titled “Confessions of a Republican,” the Johnson campaign takes advantage of establishment discomfort around Goldwater by depicting a Republican voter struggling with his party identity in light of the GOP candidate’s extreme positions.

“I certainly don’t feel guilty about being a Republican. I’ve always been a Republican. My father is, his father was, the whole family’s a Republican family,” the voter in the ad says.

However, he cautions, “When we come to Senator Goldwater, now it seems to me we’re up against a very different kind of a man. This man scares me.”

The voter goes on to question whether Goldwater is responsible, honest and surrounded by good advisers.

“Johnson, at least, is talking about facts,” he adds.

The voter in the ad concludes that he would rather vote for Johnson, a Democrat, than a Republican he disagrees with so strongly.

“When the head of the Ku Klux Klan, when all these weird groups, come out in favor of the candidate of my party, either they’re not Republicans or I’m not,” he says, before talking about the 1964 Republican convention in San Francisco. “I think my party made a bad mistake in San Francisco, and I’m going to have to vote against that mistake on the third of November.”

Former Ku Klux Klan leader David Duke has endorsed Trump, who has been widely criticized for, at one point, failing to rebuke Duke’s support.

Democratic candidate Hillary Clinton has already started using a similar argument to the one expressed in the Johnson ad against Trump, even before the general election has started. At Wednesday’s Democratic primary debate, she denounced Trump over Duke’s endorsement and criticized Trump’s divisive rhetoric and “un-American” deportation plans.

Republican leaders have also begun to sound like the man in the ad, potentially boosting such a message. In a March 3rd speech, 2012 GOP nominee Mitt Romney unleashed a broadside against Donald Trump, saying the businessman “lacks the temperament of be president.” Sen. John McCain, the 2008 Republican nominee, agreed. “I share the concerns about Donald Trump that my friend and former Republican nominee, Mitt Romney, described in his speech today,” McCain said in a statement. 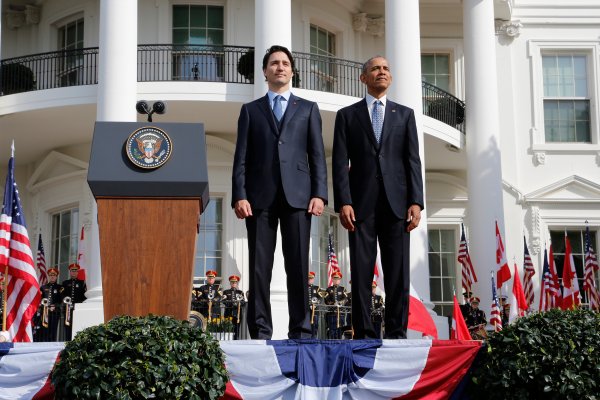