A Donald Trump supporter was charged with assault after punching a protester in the face at a rally in Fayetteville, N.C., authorities said Thursday.

Rakeem Jones, 26, was being led out of the rally when he was punched by a man in the stands and then tackled to the ground by law enforcement officers, the Washington Post reported. “My eye still hurts. It’s just shocking. The shock of it all is starting to set in. It’s like this dude really hit me and they let him get away with it. I was basically in police custody and got hit,” Jones said in an interview with the Post.

“It’s happening at all these rallies now and they’re letting it ride,” he said.

Violence has broken out at several Trump rallies recently. A black activist was reportedly punched and choked in November, and Breitbart reporter Michelle Fields was forcibly grabbed by Trump campaign manager Corey Lewandowski after a press conference on Tuesday, Politico reported.

At a rally in Las Vegas last month, Trump strongly rebuked a man who had disrupted the rally and was escorted out. “I’d like to punch him in the face,” Trump said, adding protesters “in the old days” would be “carried out on stretchers.”

Jones, who is black, said he attended the rally as a “social experiment” with a group that included a Muslim, a white woman and a gay man. He said the woman started shouting once Trump’s speech started but no one in the group attempted to get physical.

Ronnie Rouse, who attended the rally with Jones and filmed the incident, told the Post that people in the crowd shouted racial epithets at them as they left.

“I’ve never been more embarrassed to be from here in my life,” he said. “It’s just appalling.” 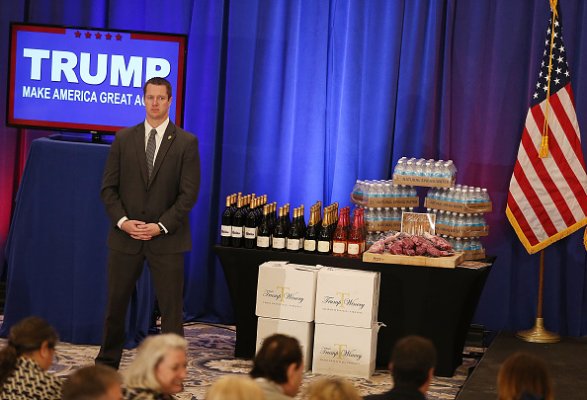 Donald Trump Seeks to Close the Deal in Florida
Next Up: Editor's Pick