Both the Obama administration and Congress are pushing for higher spending on the military next year, as are most of the presidential candidates. But most American voters have a different opinion, preferring military spending cuts instead.

The nonpartisan organization Voice Of the People recently gave registered voters around the country the task of forming their own defense budgets, after hearing vetted pro and con arguments, and it found that more than half favored cutting defense spending at least $12 billion.

President Barack Obama, in contrast, has proposed to add $2.4 billion in 2017 to the current defense budget, reflecting core spending of $523.9 billion plus another $58.8 billion ostensibly meant for overseas contingency operations.

The survey, released in Washington on March 9 by VOIP, which is affiliated with the University of Maryland, is not the first such comprehensive study to show majority voter preference for a defense spending cut.

A similar 2012 survey by three nonprofit groups, including the University of Maryland group and the Center for Public Integrity, found most of the public then backed deep spending cuts in most categories of military spending, including air power, sea power, ground forces, nuclear weapons and missile defense.

In the new 2016 survey, most voters proposed bringing the core budget down to the same level they preferred in 2012, around $497 billion. Since core defense spending has indeed declined over the past four years, this represents a smaller proportional cut than majorities favored in the earlier poll.

A majority of voters surveyed between December 2015 and February 2016 nonetheless said they wanted defense cuts in almost every area of the military, including cutting ground forces by $4 million, nuclear weapons by $3 billion, air power by $2 billion, naval forces by $2 billion and missile defense by $1 billion. Respondents wanted to keep the budgets for special operations forces and the Marines at the same level but sought no increase in any specific military area.

Voter opposition to increased military spending was once again mostly bipartisan. In the 2012 survey, two-thirds of Republicans and nine in 10 Democrats supported making immediate cuts. This time, a majority of Democrats wanted to cut the budget by $36 billion, and a majority of independents favored a $20 billion cut, while 50 percent of Republicans favored decreasing spending or keeping it the same, and 48 percent favored increasing it.

“Given all the talk about increasing the defense budget, we were surprised to find how much Americans are not sold on increases, including a majority of Republicans nationwide,” Steven Kull, director of the University of Maryland’s Program for Public Consultation (PPC) and president of Voice Of the People, said in a prepared statement.

The sample consisted of 7,126 registered voters across the country, giving it an unusually small margin of error: 1.4 percent. The survey was administered through an online program developed by the Program for Public Consultation at the University of Maryland. Respondents were given arguments for and against defense spending, as they were in 2012, to more comprehensively assess their preferences and to simulate policymaking. Staff members of the House and Senate appropriations subcommittees on defense vetted the arguments for accuracy.

The most convincing argument in favor of trimming the budget, for example, asserted that Congress often approves “unnecessary spending” and that the military branches do a poor job of “tracking where money goes.”

The survey also assessed how much most voters think the federal government is presently spending on the military. Respondents were given information about the size of the national defense budget in five different contexts, and as in 2012, their responses were influenced by these contexts.

When voters looked at the defense budget as a proportion of the U.S. annual discretionary budget, for instance, a majority found defense spending to be more than they expected. Similarly, when voters were presented the defense budget in comparison with potential enemies and allies’ budgets or in conjunction with a list of previous U.S. defense spending levels, substantially more respondents found the budget to exceed what they expected. Only when presented as a percentage of the U.S. GDP on a graph showing a decrease over time from 1960-2015, did a majority find the defense budget was less than expected.

When given the opportunity to evaluate specific weapons systems, majorities this time favored downsizing two notoriously costly weapon systems, the F-35 Joint Strike Fighter and nuclear-powered aircraft carriers. In fact, a majority endorsed cancelling the F-35 Joint Strike Fighter Program altogether, something that would save $6 billion quickly and nearly $100 billion through 2037.

But not all programs were given the boot. Majorities endorsed building the Air Force’s Next Generation Bomber, recently named the B21, for example. A majority of respondents also supported building the Navy’s new nuclear strike submarines, and opposed reducing the number of planned new submarines from 12 to 8.

On the topic of Afghanistan, most voters favored a continued presence of 5,500 troops — the current plan for U.S. presence in the country, a rare instance where the administration’s military spending proposals were in sync with voter preferences.

Defense spending is still above $500 billion, and the budget appears likely to rise. But the overall message from voters is clear — cut defense spending. It’s just not being heeded.

Lauren Chadwick is a Scoville fellow at the Center for Public Integrity. 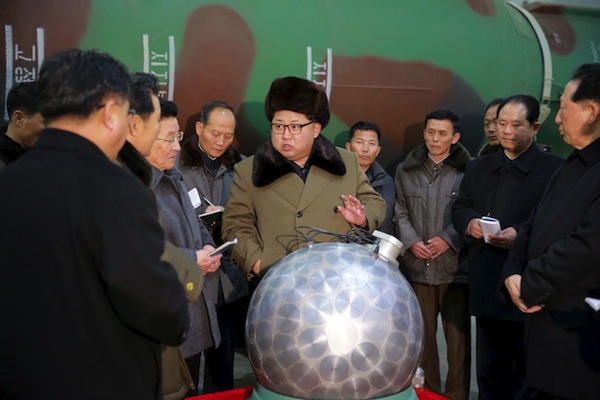 Is It Time to Attack North Korea?
Next Up: Editor's Pick