Presidential nominee Htin Kyaw (R), is seen standing next to Aung San Suu Kyi in this file photo from a press meeting at her residence in Rangoon, Burma, June 2, 2011.
Lynn Bo Bo—EPA
By Simon Lewis

It’s now (almost) official: the icon of Burma’s long struggle for democracy, Aung San Suu Kyi, will not be the country’s next president. But the Nobel Peace Prize winner, who spent much of the 1990s and 2000s confined to her lakeside villa in the former capital, Yangon, looks set to rule the country from behind the scenes, as a drawn out — but still remarkable — transition from military dictatorship continues.

Her party, the National League for Democracy (NLD), on Thursday nominated Suu Kyi’s close aide — and former driver — Htin Kyaw to be the lower house of parliament’s candidate in a complex presidential selection process over the coming days, the Associated Press reports. The party won a landslide election in November, securing almost four out of every five elected seats in the legislature — enough to make Htin Kyaw the president ahead of a military nominee.

The NLD-dominated upper chamber elected Henry Van Thio as a further nominee, AP said. A member of the Chin ethnic minority, he is expected serve as one of two vice presidents (the other will be the military nominee). His nomination is symbolic for the country’s ethnic minority groups, who make up more than a third of the population. The candidates still need to be approved to make sure they meet the criteria for president; the winner will assume the role of head of state at the start of April.

As expected, the primary criteria for the NLD’s choice appears to have been loyalty to the party chairperson. Htin Kyaw serves as a senior executive at the charitable foundation that Suu Kyi runs in honor of her mother, and has pedigree in Burma’s pro-democracy movement. According to local magazine The Irrawaddy, Htin Kyaw’s father was a renowned poet who was elected as a lawmaker in the 1990 elections — which the NLD won, but the military junta ignored. His wife, Su Su Lwin, is a lawmaker for the NLD in the new parliament, and is the daughter of one of the party’s founding members.

Htin Kyaw, believed to be 70 years old, is expected to play the role of a puppet president, with Suu Kyi pulling the strings.

November’s election, while the freest and fairest in the country’s modern history, took place within limitations set by the generals of the former junta, who forced through a new constitution in 2008 via a rigged plebiscite. While a new set of lawmakers took their seats in parliament last month, they were joined by a contingent of military officials dressed in fatigues, since the charter gives the commander-in-chief the right to select 25% of MPs (as well as one vice president and three key ministers).

Another obstacle built into the constitution is the rule that bars those with close family members of other nationalities from taking the top job. Suu Kyi and her late husband, a British scholar, had two sons, who are U.K. citizens.

The current military leadership rejected Suu Kyi’s last ditch attempt to reach a deal that would bypass the constitutional provision and allow the country’s most popular politician to assume the presidency. But Suu Kyi has been preparing for this eventuality. Shortly before the election, she told reporters the constitutional clause “won’t stop me from making all the decisions as the leader of the winning party.” She would be “above the president,” she said.

The idea of a proxy leadership has been tried elsewhere in Asia. India’s Congress party chairperson Sonia Gandhi selected Manmohan Singh to become prime minister after 2004 elections. In Thailand, former Prime Minister Thaksin Shinawatra went into exile avoiding a conviction for corruption, only for his younger sister, Yingluck, to be elected later by his supporters. In both cases, the administrations have since been kicked out of office — in India’s case at the polling booth and in Thailand’s by a coup.

But many Burmese are positive that such an arrangement can work. “Given that the president and cabinet are ultimately being appointed by Aung San Suu Kyi and the NLD leadership, the mechanics of a proxy presidency are not necessarily as complicated as some may make it out to be,” Nyantha Maw Lin, managing director at advisory firm Vriens and Partners in Burma, told TIME.

However, he said, the real challenge will be dealing with the military, which retains a significant role across the political system. “On one issue already — constitutional change — it is apparent that the NLD will likely have to play by the military’s sense of timing,” Nyantha Maw Lin said. “Both sides will need to find a model for cooperation given the stakes involved.”

Burma has undergone a significant political and economic opening since a quasi-civilian regime, stacked with former generals, took power in 2011. Hundreds of political prisoners have been released and a vibrant press has been unleashed. But Suu Kyi, a former prisoner of conscience herself, will be taking over a system that has continued to stifle dissent. With military appointments running the defense, interior and border affairs ministries, the NLD-run government will be hamstrung, especially when it comes to dealing with the country’s long-running civil wars with ethnic armed groups, who still control swaths of territory along the borders.

“She could move fast to amend abusive laws and release political prisoners, but she has little constitutional power to rein in the military and their ongoing abuses, or compel insurgents to end human rights violations,” said David Mathieson, Human Rights Watch’s senior Burma researcher.

The mostly-Buddhist country has also been wracked by anti-Muslim sentiment and outbreaks of violence in recent years, particularly in the western Rakhine state, where more than 1 million stateless Rohingya Muslims live. Challenging a pervasive Buddhist chauvinism should be a priority for Suu Kyi, but will likely not be on the agenda, he said. It would be “too risky for her social and political capital to challenge ultranationalist monks or defend the Rohingya,” Mathieson added. 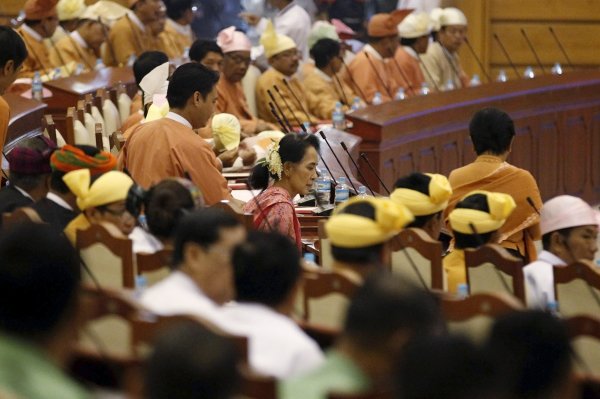