Yasmin, a Syrian refugee, tries to catch a goat during her work at a farm in Kilis, Turkey, March 3, 2016.
Chris McGrath—Getty Images
By Shona Murray/Kilis, Turkey

Syrian refugees say that any deal between the European Union and Turkey, proposed on Tuesday, will not stop them from traveling to Greece and then onto northern Europe.

Turkish and European diplomats agreed that refugees arriving in Greece from Turkey would be sent back and for every refugee sent back, the E.U. would re-settle a refugee in Turkey. Turkey has reportedly asked for $6 billion in aid to help it manage an estimated 2.5 million Syrian refugees. The deal has not been finalized and talks are due to continue in Brussels on March 17.

Syrian refugees say that they are not safe in camps in Turkey and have little hope of a normal life there. On Tuesday, eight rockets were fired at a camp in Kilis, killing a 55-year-old woman and a 4-year-old boy. The Turkish army says it came from Al-Bab, an area in North Aleppo controlled by ISIS. The Turks returned fire and continued to fire artillery shells throughout Tuesday.

The sun sets on the city of Kilis, which lies along Turkey's southern border with Syria and includes the Oncupinar Crossing, March 1, 2016.
Chris McGrath—Getty Images

Rama, 20, from the Syrian town of Aleppo says she and her 50-year old mother and three brothers will travel to Izmir on the Turkish coast to find a people smuggler to help them travel to Greece. “Even here in Kilis there are bombing noises – this is more trauma for us,” she says. “We have no life in Turkey, I want to be a civil engineer like my father, but it’s impossible for this to happen here.”

Rama wants to join her father in Germany where he has been for a year. Her mother, Reem is a pharmacist by profession and her children were preparing for university when the family fled. The family endured the violence of the civil war but it was the threat of the Syrian army conscripting Ahmed, the eldest son of the family, that prompted the family to leave for Turkey.

“They were forcing us to take him to the army; but we didn’t want him to die,” says Ali, Rama’s 18-year-old brother. Several of Ahmed’s friends were conscripted and one was killed soon afterwards. “After that, we just left everything; every happy thing and our happy life, but we had to go, because this is not our war,” he says.

Ali says that news of the E.U. plan will not hold them back.“Yes, I heard about the E.U. plan. But I think we can still make it; we have to do it,” says Ali. The family know that they not only risk death crossing the Aegean Sea to Greece but they may be penalised for traveling to the E.U. illegally.

If the E.U.-Turkey plan goes ahead, any “irregular migrant” coming to Europe from Turkey will be “put on the bottom of the list” for resettlement, European Commission President Jean Claude Juncker said after 12 hours of talks in Brussels on Tuesday.

Doha Amud, 39, from Aleppo, also has a husband in Germany. She applied for a visa to join him, along with her three children ranging from 8 months to 14 years of age. She says will take them all on a boat to Greece if she doesn’t receive a response in the next few weeks. “I will be worried about not getting there alive and if they stop us, but I can’t live like this. God will help us, I hope. We’re going to work, that’s all we want to do, have some dignity, not to hurt anybody.”

“The [E.U.] plan simply won’t work, and its not just because of the violence in places like Kilis”, says Derek O’Rourke Regional Security Advisor for Goal Middle East, an Irish charity working inside Syria and Turkey. “Refugees will do longer routes making the journey even more dangerous.” And the smugglers are “not going to walk away from a multi-million euro trade,” he says.

Meanwhile, Reem is deeply distressed about the trip ahead. “I cry every day, but this is the only chance for safety and to see my husband on the other side.” She hasn’t worked in two years and money is tight. Her greatest fear is seeing her children die on the journey – it keeps her awake at night. “But then I dream that we’re all sitting at one table with my whole family; I just want to sit with them all at the same table – I miss my husband so much.” 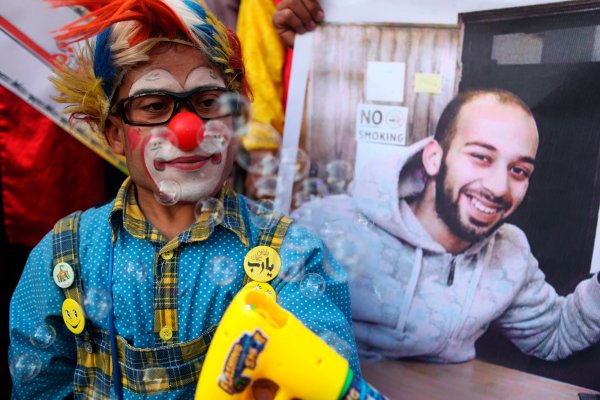 Why This Palestinian Clown Is Being Jailed Without Trial
Next Up: Editor's Pick