J.K. Rowling Reveals the Connection Between Salem and American Wizardry

Seventeenth Century and Beyond is the second installment in The History of Magic in North America, Rowling’s collection of four new stories about the previously unexplored American wizarding world. The author is using these pieces to set the scene for Fantastic Beasts and Where to Find Them, a Harry Potter prequel film set in 1920s New York City.

The tale explains why witches and wizards who emigrated to America from Europe struggled to adjust to their new home. First, there were fewer resources for potions and no established wandmakers. Secondly, the Puritans, a group that instigated conflict with the Native American population, made witches and wizards extremely wary of their magic.

And lastly, the Salem Witch Trails of 1692-93 “were a tragedy for the wizarding community,” Rowling writes due to a group called Scourers, “an unscrupulous band of wizarding mercenaries of many foreign nationalities, who formed a much-feared and brutal taskforce committed to hunting down not only known criminals, but anyone who might be worth some gold.” The Scourers sound similar to the Death Eaters, as the group also “indulged a love of authority” and “enjoyed bloodshed and torture.”

Rowling clarifies that during the Salem Witch Trials “among the so-called Puritan judges were at least two known Scourers,” and that “a number of the dead were indeed witches, though utterly innocent of the crimes for which they had been arrested. Others were merely No-Majs who had the misfortune to be caught up in the general hysteria and bloodlust.”

The events at Salem led to the creation of the Magical Congress of the United State of Americas in 1693.

The third part of the series will go live at 2 p.m. GMT on Thursday. 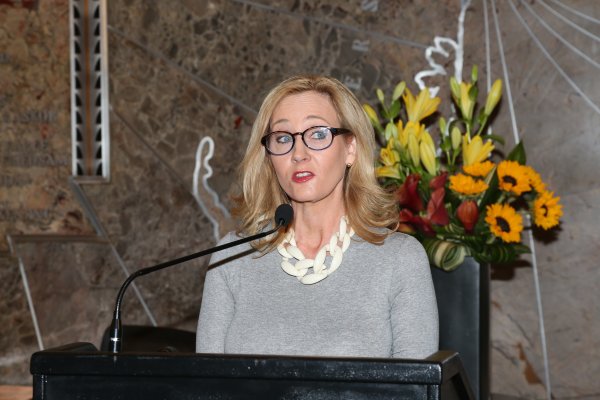 J.K. Rowling Accused of Cultural Appropriation In Her Depiction of Native American Wizards
Next Up: Editor's Pick