Donald Trump Seeks to Close the Deal in Florida

A security agent stands near a display of products that Republican presidential candidate Donald Trump has for guests, including meat, wine and water before a press conference at the Trump National Golf Club Jupiter on March 8, 2016 in Jupiter, Florida.
Joe Raedle—Getty Images
By Zeke J Miller / Jupiter, Florida

Donald Trump took the stage in the gold-accented, chandeliered ballroom at his Trump National Golf Club, Jupiter before a roomful of his well-heeled customers who posed for photos as they sipped wine and nibbled on hors d’oeuvres.

With membership stakes selling for as much as $210,000, Trump had already closed plenty of big deals at the property. Now, with cameras rolling, and results in Michigan, Mississippi, Idaho, and Hawaii trickled in Wednesday he was looking to take make an even bigger pitch.

The product in question was the Republican presidential nomination, which Trump’s wins in three states put him closer to clinching. But first, Trump felt he needed to sell himself.

The last Republican nominee, Mitt Romney, criticized varied Trump’s business record in a speech last week, singling out a number of Trump products that failed. In response, Trump sought to defend each one, even bringing in props, in what amounted to a 40-minute infomercial carried live by cable news networks—QVC by way of CNN.

Trump knows how to put on a show, but some of his claims were like cubic zirconia, impressive but not quite the real deal.

Time and again, Trump stretched the truth on both the personal and political. Kitchen employees carried out pile of “Trump Steaks” on a pair of butcher blocks, except, despite his claims, they weren’t from the long-defunct label he once sold at Sharper Image. Instead they were simply cuts from a local proprietor that he serves at the restaurant at his golf club—with the tag still visible on closer inspection.

Joining the steaks on the presentation tables flanking the candidate were cases of Trump water—simply a label on a bottle from another Connecticut company—as well as Trump wine, the only product actually for sale (and owned by his son).

The Republican front-runner again defended Trump University, a defunct real estate program embroiled in a fraud suit which was given a D- rating from the Better Business Bureau. Trump claimed he made a “phenomenal” deal selling off the Trump Shuttle, which defaulted on its loans and never turned a profit.

His embellishments were often gratuitous. He claimed New Jersey Gov. Chris Christie was present, but an aide said he wasn’t there. He joked he was going to sell the steaks for $50 a pop, when they weren’t his to sell.

Bounding off the stage to grab a copy of his in-room magazine, Trump Magazine, the candidate held it up for the world to see—to show that it indeed existed. But like the other ventures, it was merely an amenity for his hotel and club guests.

On the political front, he sold himself as a candidate who could “dominate” in Michigan, win the reliably blue state of New York and beat Hillary Clinton in November.

Trump’s fall campaign rests on whether he could make good on his threat in Rust Belt states like Michigan, but his other two claims were already suspect.

A recent poll shows Clinton would beat him, 57 to 34, in their home state of New York. And the 10 most recent national polls on a head-to-head matchup show her ahead by anywhere from one to 11 percentage points.

But that didn’t matter Wednesday. Trump made his case directly to the television audience for 40 minutes, and the networks didn’t even break for commercial. 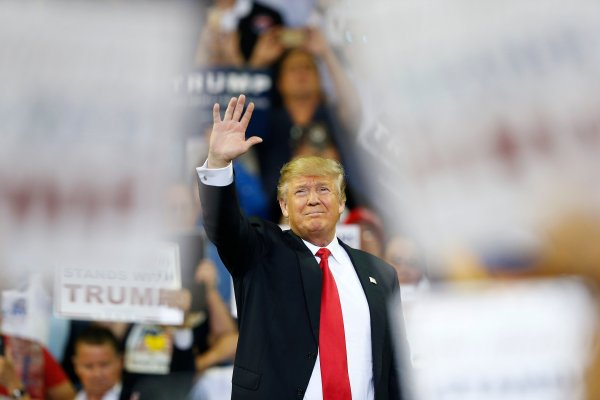 14 Questions You Were Too Embarrassed to Ask About Blocking Donald Trump at the GOP Convention
Next Up: Editor's Pick