By Jennifer Frederick and Mike Barnes / The Hollywood Reporter

George Martin, the “Fifth Beatle” and British treasure who signed the Fab Four to a label contract when no one else would, produced virtually all their songs and introduced lavish arrangements into “Yesterday” and “A Day in the Life,” has died. He was 90.

Beatles drummer Ringo Starr shared the news on Twitter, writing “Peace and love… George will be missed.” A Universal Music Group spokesperson confirmed Martin’s death, though details are not yet clear.

The producer, executive, arranger, musician and British knight was behind a whopping 23 No. 1 singles in the U.S. and 30 in the U.K.

As head of EMI’s Parlophone Records, which then concentrated on jazz and comedy, Martin was on the lookout for a rock act when he met Beatles manager Brian Epstein in February 1962. Every other British label had passed on signing the foursome — John Lennon, Paul McCartney, George Harrison and Pete Best.

Martin called their demo made for Decca Records a month earlier “rather unpromising,” but there was something about those Lennon-McCartney harmonies, so he scheduled The Beatles for a recording session at EMI’s Abbey Road studios in June. He liked what he heard and signed them up. (The Hollies would later join Parlophone as well.)

Martin chose not to promote one of them as the frontman, suggested they replace Best (studio drummer Starr came on board) and allowed them to record their own material. Their first single, “Love Me Do,” peaked at No. 17 on the British charts.

For The Beatles’ first U.S. single, “Please Please Me,” in November 1962, he convinced the boys to speed up the tempo. It proved to be a smash hit. “Gentlemen, you have just made your first No. 1 record,” he memorably told them from the control room.

Martin also served as The Beatles’ arranger. He suggested strings be added to “Yesterday,” which would become one of the most covered songs of all time, and conducted the string section for “Eleanor Rigby.” He played piano on “In My Life” and composed its harpsichord section; was responsible for the breathtaking orchestral windup in “A Day in the Life;” and used backward tapes to help shape the psychedelic elements of Sgt. Pepper’s Lonely Hearts Club Band.

Martin described his relationship with The Beatles in his 1979 book, All You Need Is Ears.

“I must emphasize that it was a team effort,” Martin wrote. “Without my instruments and scoring, very many of the records would not have sounded as they do. Whether they would have been any better, I cannot say. They might have been. That is not modesty on my part; it is an attempt to give a factual picture of the relationship.”

Martin received an Academy Award nomination for best music, scoring of music, adaptation or treatment for The Beatles’ 1964 classic film A Hard Day’s Night, directed by Richard Lester; arranged the score for their 1968 animated movie Yellow Submarine; and scored, with Paul and Linda McCartney, the 1973 James Bond film Live and Let Die.

In 2006, Martin remixed, along with his son Giles Martin, the music for Love, the Cirque du Soleil production that celebrated Beatles music in conjunction with Apple Corps. It included a new orchestral song, written by Martin, for a solo version of Harrison’s “While My Guitar Gently Weeps.”

Martin was knighted in 1996 (a year before McCartney received the honor) and inducted into the Rock and Roll Hall of Fame in 1999.

Martin was born on Jan. 3, 1926, in Highbury, London. He received a few piano lessons as a child but mostly learned to play by himself and had “fantasies about being the next Rachmaninoff.”

More from The Hollywood Reporter: How The Beatles’ Streaming Marks a Turning Point for Digital Music

Martin entered the Royal Navy, and after leaving the service in 1947, he received a government grant to study music at the Guildhall School of Music and Drama, a London college, where he learned composition, orchestration and how to play the oboe.

Martin said he decided to pick up the oboe because he figured it could help him earn a living, and indeed, it helped him score a job producing classical baroque recordings at Parlophone, run by Oscar Preuss.

Martin became the head of A&R in 1955 when Preuss retired and found success with such comedy records as Peter Ustinov’s 1952 novelty record “Mock Mozart” (Anthony Hopkins played harpsichord on one song) and worked with Peter Sellers, Spike Milligan, Peter Cook and Dudley Moore. Lennon, a big comedy fan, surely was impressed by this facet of Martin’s career.

In 1962, under the pseudonym Ray Cathode, Martin put out an electronic dance single, “Time Beat,” recorded at the BBC Radiophonic Workshop, which fueled his desire to find a rock ’n’ roll group with whom to work.

He left EMI in 1965 but continued to work in a freelance capacity, producing The Beatles’ final album release, Abbey Road. (Phil Spector took over, for the most part, on the Let It Be album and documentary.) He opened the AIR recording studios in London and the Caribbean and attracted such artists as The Rolling Stones, Stevie Wonder and The Police to record.

Martin’s work with McCartney also included producing his albums Tug of War (1982), Pipes of Peace (1983) — which featured McCartney collaborations with Wonder and Michael Jackson — and Flaming Pie (1997). Along with his longtime engineer Geoff Emerick, Martin oversaw postproduction on an eight-track analog-mixing desk for platinum-selling compilations like Live at the BBC and Anthology, which featured unreleased songs “Free as a Bird” and “Real Love.”

Martin wrote three books, including his 1979 autobiography, All You Need Is Love, co-written with Jeremy Hornsby. He produced and hosted The Rhythm of Life, a BBC documentary series that highlighted artists and discussed musical compositions, and the 2011 documentary Produced by George Martin gained worldwide acclaim, offering an insider’s peak into the producer’s life.

In 1997, Martin rerecorded Elton John’s “Candle in the Wind,” originally written by John and Bernie Taupin about Marilyn Monroe but retooled as a tribute to Princess Diana. The song became the second best-selling single in history, and Martin called it “probably my last single. It’s not a bad one to go out on.”

A year later, Martin’s produced the album In My Life, on which artists and actors covered songs in The Beatles catalog; Robin Williams and Bobby McFerrin provided the vocals on “Come Together.”

Martin married Sheena Chisholm, whom he had met in the service, on his 22nd birthday in 1948, and after they divorced, wed Judy Lockhart-Smith, a Parlophone secretary, in 1966.

In addition to his son Giles, survivors include his other children Alexis, Gregory and Lucy. 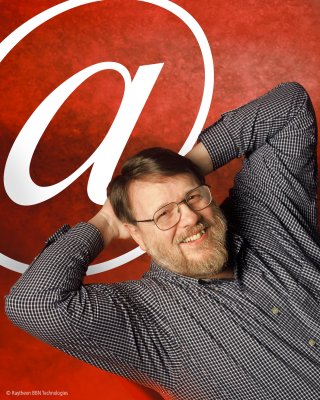 The Founder of Email, Ray Tomlinson, Dies
Next Up: Editor's Pick