Marco Rubio’s campaign knows how to craft a narrative. They penned his political biography as a man who could turn the Republican Party into a Benetton-ad, and then started spinning yarns that a string of third- and second-place finishes showed all-important momentum.

So it was all the more stunning Monday when campaign aides saw a CNN story suggesting advisers were discussing Rubio dropping out of the race before his home state of Florida votes next Tuesday.

It was a spectacular reversal of fate for the Rubio campaign, which has long prided itself on aggressive—if sometimes robotic—message discipline, and one that came at a precarious time for the beleaguered candidate. The story did more than hastily send the campaign spokesman Alex Conant across town to appear on CNN to shoot down a report he called “fiction.”

It was just the latest revelation of the extent to which strategic and tactical missteps have sent the campaign reeling amid a far more intense primary than they had prepared for.

In early 2015, Rubio aides compared their strategy for winning the nomination to “catching lightning in a bottle.” The campaign was organized from top-to-bottom around the theory, relying on just a small team of aides until just weeks before voting began, and eschewing a ground game for a media-centric campaign.

Now, if there is a path remaining, it is through the exact opposite: a grueling primary slog and an unpredictable and divisive contested convention. Conant maintained that Rubio would fight on regardless of the outcome in Florida in an effort to keep Trump from the nomination, but most Republican operatives see that as little more than spin.

Tactically, backers and observers say Rubio’s current predicament is a result of an uncharacteristic failure to manage expectations. In recent weeks, the campaign has allowed its own proclamations of “momentum” to infect its internal thinking. Aides assumed that Jeb Bush’s exit would have led to swifter consolidation behind their candidate, despite longstanding polling showing many Bush voters were reluctant to follow the youthful Rubio.

Many of Bush’s backers in elected office quickly switched allegiances to Rubio, but some of his top financial backers have remained on the sidelines. “The Jeb race was emotionally consuming and I’m just not in a mood to choose that quickly afterwards,” said Al Cardenas, a Florida powerbroker and the former chairman of the American Conservative Union. Suddenly, a candidate who had never been projected to perform well in Nevada or Super Tuesday was greeted by headlines on his underwhelming performances.

“They got too big for their britches,” said a Rubio bundler.

The broader misstep, was in a candidate that tried to be everything to everyone, and may have lost himself in the process. For much of 2015, Rubio avoided inserting himself into the primary squabbles swirling around him in hopes of selling himself as a generational figure.

But as Trump’s bombast dominated the news coverage, Rubio’s lofty message began falling flat. He began swiping at Trump, first on policy and then personally, but misjudged the toll getting into the mud would take on his brand. Lacking a defined base of his own, Rubio’s campaign saw some supporters flock to Texas Sen. Ted Cruz, who flirted with Trump attacks but avoided the personal ones, or Ohio Gov. John Kasich, who refused to engage his rivals entirely. Rubio has since reversed course on the Trump attacks.

The candidate, who has been an underdog in all of his past races, is, at least publicly, relishing in being written off once again, pledging to prove the doubters wrong. But the stakes for Rubio have never been higher.

Rubio’s team argues that a win in Florida and it’s 99 delegates on March 15 would “reset” the race, when the campaign slows for a month of just a handful of contests before shifting to more populous—and they argue, politically friendly—Northeastern states. But a home state victory is by no means assured. His campaign is touting polls showing him trailing Trump in the state. And first he’ll have to endure more beatings Tuesday, when Michigan, Mississippi, Idaho and Hawaii vote. Trump is heavily favored, though Rubio aides believe strong showings for their man are possible in the latter two contests.

Rubio’s campaign maintains that the prospects for their rivals are hardly much better. Kasich is similarly betting on a contested convention and possesses even fewer delegates than Rubio. Meanwhile, Cruz’s path to 1,237, they argue, is increasingly unrealistic.

There is reason for hope in Florida, where Rubio is narrowing the gap on Trump by the day and where he plans to spend every day until his do-or-die moment arrives. The campaign has made a frantic effort to build out a ground operation to collect early votes, and is hoping for strong turnout among the state’s Latino and particularly Cuban-American population to help him overcome Trump’s pull in the northern part of the state.

Rubio aides note that the winner of the Puerto Rico primary—which Rubio won in a blowout on Sunday—has won also Florida consistently. But a complicating factor is the more than 220,000 absentee ballots that were cast by Republicans before Florida Gov. Jeb Bush dropped out, containing an untold number of votes for Rubio’s former mentor. With twice that many cast now, Rubio will likely have to do better than simply pull even with Trump on Election Day in order to secure a victory.

For all his skill at narratives, Rubio hasn’t come up with a happy ending to this one just yet. 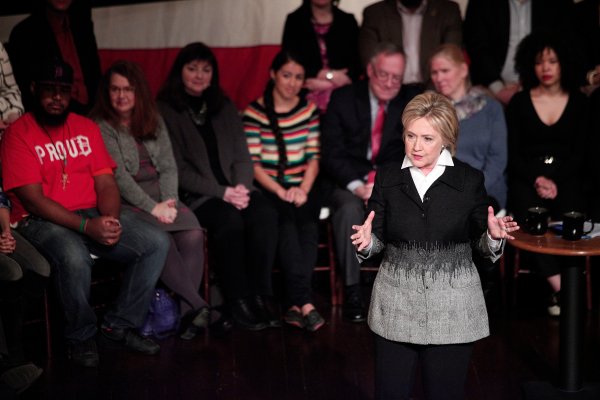 Clinton In Favor Of Special Forces in Libya
Next Up: Editor's Pick