Why Almost No One Believes Egypt's Security Services

In this June 29, 2015, file photo, Egyptian policemen stand guard at the site of a bombing that killed Egypt's top prosecutor, Hisham Barakat, who oversaw cases against thousands of Islamists, in Cairo, Egypt.
Eman Helal—AP
By Jared Malsin/Cairo

An accusation by Egypt’s interior minister on Sunday that members of the Muslim Brotherhood carried out the assassination of the country’s chief prosecutor has highlighted a simmering debate about the credibility and conduct of Egypt’s security apparatus as it grapples with ongoing attacks by militants. The interior minister, Maj. Gen. Magdi Abdel-Ghaffar said at a news conference that members of the Islamist group had carried out the bombing that killed chief prosecutor Hisham Barakat last June, following training by the Palestinian armed group Hamas in the Gaza Strip, in coordination with exiled Brotherhood leaders living in Turkey.

The accusation comes at a moment when Egypt’s embattled interior ministry is already facing heightened scrutiny as a result of high-profile accusations of abuses by the security forces. In February activists accused the security forces of killing an Italian doctoral student who disappeared from central Cairo in late January, and whose body was found with marks of torture. The student’s killing, along with a separate case in which a police officer shot dead a driver on the street in Cairo, has renewed calls from human rights groups, Egyptian media and lawmakers for reform of Egypt’s vast police and security apparatus, a set of institutions that represent the legacy of decades of autocratic rule. Analysts say that those controversies and others will likely increase international skepticism of the ministry’s account of the killing.

“Many analysts speculate the most likely culprits behind the assassination were rogue pro-MB [Muslim Brotherhood] elements—but that doesn’t mean the Egyptian Ministry of Interior’s latest release will be taken particularly seriously,” says H.A. Hellyer, an Arab affairs scholar at the Atlantic Council in Washington and the Royal United Services Institute in London. “The Interior Ministry’s credibility is perceived internationally at an all-time low, particularly given widespread reporting around the death and torture of an Italian student in Cairo, as well as forced disappearances—which will damage any efforts they make to blame any party—including the MB.”

The minister’s announcement on Sunday was intended to shed light on one of the more spectacular and puzzling acts of political violence in Egypt in recent years, one that shocked the country’s political establishment. Barakat died of wounds he sustained in a daylight car bombing in an elite Cairo neighborhood in June 2015. He was the highest-ranking official to be assassinated in Egypt in 25 years.

Barakat’s killing came amid a wave of attacks that followed the military’s removal of Islamist president Mohamed Morsi from power in July 2013. Insurgents based in the Sinai peninsula, now affiliated with ISIS, have claimed responsibility for many of the deadly attacks, primarily on members of the police and security forces. The group, which now calls itself the “Sinai Province” of the Islamic State, also claimed to have brought down a Russian airliner in October 2015, killing 224 people. Yet Egyptian president Abdel Fattah al-Sisi only acknowledged the plane was downed by militants for the first time on February 24, after months in which his government resisted the conclusions of Russian and other officials who said the crash had been an act of terrorism.

The Barakat assassination was a sophisticated attack that would have required a high level of expertise and planning. But unlike the other attacks, there was no clear claim of responsibility for the prosecutor’s assassination. In his remarks on Sunday, Abdel-Ghaffar said that Yahia Moussa, a Muslim Brotherhood member who had been a health ministry spokesperson under Morsi, had helped organize the attack from Turkey, where some Brotherhood officials fled following the military takeover. He said the members of the alleged plot had been sent to receive weapons training with Hamas in the Gaza Strip. In a statement, the Interior Ministry said the alleged operatives involved in the attack entered Egypt from Sudan with the help of smugglers, and that “up to 48” people involved in the plot had been arrested recently.

Amr Darrag, who served as minister of planning and international cooperation in Morsi’s cabinet, denied the accusations in an interview with TIME by phone from exile in Turkey. “This is not the methodology of the Brotherhood,” he says. “The Brotherhood has been saying all the time that peacefulness is the right approach for facing the regime. If that was the methodology of the Brotherhood, it would have been a lot more chaos than where we’re at right now.” Hamas has also denied the Egyptian minister’s accusations.

The allegations are also likely to hamper any effort at reconciliation between Egypt and Hamas, a movement whose own roots can be traced back to Egypt’s Muslim Brotherhood. For years under President Hosni Mubarak, Cairo maintained a consistent relationship with Hamas, often serving as a mediator between the Palestinian group and Israel. But after a year of even friendlier ties under Morsi’s Brotherhood-led administration, relations sank following the military takeover, as Sisi’s government launched a campaign against Islamist groups.

By implicating Brotherhood leaders who fled to Turkey following the 2013 military takeover, Abdel-Ghaffar’s remarks also highlighted the increasingly tense relationship between Cairo and the government of President Recep Tayyip Erdogan in Turkey. Erdogan’s Islamist-leaning government had enjoyed warmer ties with Morsi and the Brotherhood-led government prior to 2013, and provided refugee for some exiled Islamist leaders following Morsi’s removal. “Cairo will interpret this as a form of international terrorism, and that won’t look good on the report card of Ankara,” says Doğu Ergil, a Turkish political analyst. “It all depends on the validity of the evidence that will be obtained, because this could be a rumor as well.” 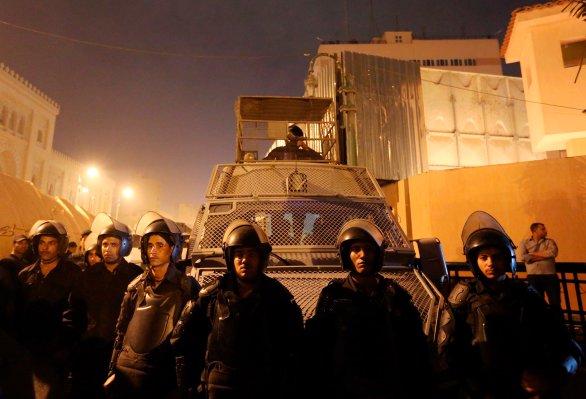 The Sentencing of a Toddler Shows How Out of Control Egypt Has Become
Next Up: Editor's Pick