When Hillary Clinton and Bernie Sanders participate in their town hall-style meeting Monday night, it will mark a first for the Democratic race for the White House nomination. Fox News is finally getting a piece of the action.

Fox, which is wildly popular with conservatives and seen skeptically by liberals, is set to facilitate a conversation with undecided Michigan voters in Detroit. Fox News’ chief political anchor Bret Baier is leading the event, building on his recent turns moderating Republican debates that have broken viewing records with tough questions for those candidates.

Ahead of the debate—and Michigan’s primary on Tuesday—TIME spoke with Baier. Below is a lightly edited transcript of the chat.

What should we be looking for?

Look for substantive questions from an audience of Michiganders who are undecided in the Democratic race. They’ve put forward some great questions. I’ll have my own set of questions. It will be obviously different than the (Sunday) debate in Flint. We’ll be watching that closely to see where we can fill in holes for questions that weren’t asked or weren’t answered. We’ll be a newsy as we can in the town hall format.

How much of your prep will be thrown out based on the debate in Flint? You might have a great question, but if they get there first, how do you deal with that?

I throw it out. I can imagine 50% of what we’ve worked on to be shifted based on what happens in Flint. Debates are one kind of animal, if you will. They have a certain amount of time, there’s a lot of back and forth. Town halls let you get into the weeds a little more and ask some follow-ups to questions. I think a lot will change, and we’re ready for that.

Is this really the first time you’re going to be sitting down with Sen. Sanders?

It is. The first time I’ll be sitting down with Sen. Sanders. Obviously, Chris Wallace had him on Fox News Sunday. I have not interviewed Sen. Sanders.

I interviewed Secretary Clinton two years ago when her book came out. We’re excited.

The whole thing developed as a thought process. We had tried to do a debate but we were never able to lock that in.

Two years ago was the last time Secretary Clinton did Fox, right?

That was the last time she did an interview with Fox. That’s right.

Why are Democrats so leery about Fox News? You have the biggest audience in cable news.

That’s a good question. You should ask them. I don’t know. I hope this is the opening to many things to come. I think if I were a campaign strategist, I’d want my candidate on the biggest news channel.

Maybe, our debates opened up a door. They feel that they’re journalistically sound and fair. Hopefully, that opens them to doing more. We hope this is the first of several.

It’s clear that you guys really prepare for your debates. Are you putting that level of preparation into the town hall?

We just got through our debate (on Thursday).

You’ve got to be burned out.

It’s being squeezed a little bit in terms of prep time. I won’t get as much prep time because of how it all came together; Secretary Clinton only agreed to this on Friday. We’ll be prepared no matter what. They’ll be solid questions. But it’s a different level of preparation than a debate.

There’s always the skepticism about Fox News among liberals. Is there going to kid gloves with these candidates to avoid having your questions called attacks?

No. Listen, any time you do something like his, anything, you’re going to get criticism from all sides just for doing it. I look for a balance in tough questions and fair questions, perhaps those that are not asked in other places. I think the audience has some really good questions about different policies that are concerning them. I can follow up. That will be a good format. Each candidate will have roughly 30 minutes. I hope we can get to a lot without commercial breaks.

Can we handle a political event without Mr. Trump?

Yes. Listen, we did the debate in Iowa without Mr. Trump and everything went fine. He obviously draws a lot of attention and a lot of spotlight. This Democratic town hall will be a lot different.

What was going through your head last week when we ended up discussing the size of Mr. Trump’s hands?

If you remember, I was the one who said, “OK, let’s move on” after that exchange. I thought we had crossed a barrier that we had never crossed in presidential debates. At that moment, we had to get it back on the rails, and we did shortly after that.

Overall, over two hours, we got to a lot of topics. It was clearly fiery. I wanted the headline to be Fiery but Substantive Debate. The headline happened to be Hands. But I think it worked.

Is 2020 going to be a snoozefest after this? Is any future race going to compare?

Give me the strength.

It has opened up a whole different thing about who runs for President and what exactly the parameters are. Donald Trump has broken the mold.

I don’t know if he goes all the way. We’ll see. He’s certainly in position to get the GOP nomination. He’s changed the way that political races are run. 2020 could be just as—or more—interesting. 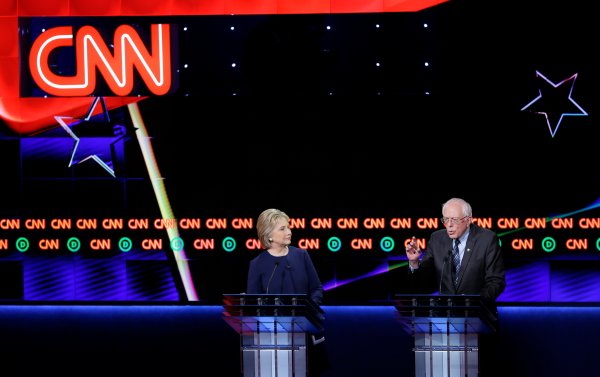 Democrats Flash Back in Flint
Next Up: Editor's Pick