The 94-year-old wife of President Ronald Reagan was remembered for her deep love for her husband as well as for her legacy that included devoting her service to drug education and the prevention of drug abuse among young people.

“Nancy is where she has always wanted to be with her Ronnie,” Michael Reagan, president of the Reagan Legacy Foundation, wrote on Twitter. “Now she is at peace.”

Former President Bill Clinton touted the former first lady’s “legendary” strength of character in a statement released on behalf of him and his wife Hillary Clinton. “Nancy was an extraordinary woman: a gracious First Lady, proud mother, and devoted wife to President Reagan – her Ronnie,” he said. “Her strength of character was legendary, particularly when tested by the attempted assassination of the President, and throughout his battle with Alzheimer’s. She leaves a remarkable legacy of good.”

President Barack Obama and Michelle Obama said in a joint statement that Nancy Reagan “redefined the role” of first lady during her tenure. “Nancy Reagan once wrote that nothing could prepare you for living in the White House. She was right, of course. But we had a head start, because we were fortunate to benefit from her proud example, and her warm and generous advice,” their statement said. “We offer our sincere condolences to their children, Patti, Ron, and Michael, and to their grandchildren. And we remain grateful for Nancy Reagan’s life, thankful for her guidance, and prayerful that she and her beloved husband are together again.”

Former President George W. Bush also issued a statement, acknowledging her fierce loyalty to her husband. “Her influence on the White House was complete and lasting. During her time as First Lady and since, she raised awareness about drug abuse and breast cancer,” he said. “When we moved into the White House, we benefited from her work to make those historic rooms beautiful. Laura and I are grateful for the life of Nancy Reagan, and we send our condolences to the entire Reagan family.”

The family’s condolences also included those from former First Lady Barbara Bush, who said in a statement: “Nancy Reagan was totally devoted to President Reagan, and we take comfort that they will be reunited once more.”

The former actress married Ronald Reagan in 1952. The couple had two children together. The 40th U.S. president died in 2004 at age 93.

Others who weighed in on the passing included actor and former California governor Arnold Schwarzenegger, who said the former first lady was one of his heroes. “She served as First Lady with unbelievable power, class and grace and left her mark on the world,” he said.

Republican presidential hopeful Ted Cruz also offered his condolences in a tweet that said “Nancy Reagan will be remembered for her deep passion for this nation and love for her husband, Ronald. The Reagan family is in our prayers.”

Donald Trump said she “will be missed.” “Nancy Reagan, the wife of a truly great President, was an amazing woman,” Trump tweeted.

Nancy Reagan left behind a lasting impression on the country, Republican National Committee Chairman Reince Priebus said in a statement. She “embodied what it means to represent America as First Lady and her dignified and warm demeanor inspired America,” Priebus said. “Mrs. Reagan will go down in history as a woman who left her own mark on the White House and our country.” 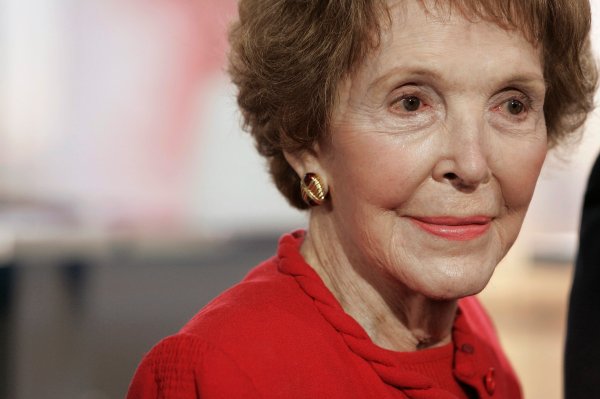 Nancy Reagan Dead at 94
Next Up: Editor's Pick