He was the most consistently compelling player, in the most glamorous position, in America’s most important game. It’s so easy to picture Peyton Manning at the line of scrimmage, since his freneticism is so ingrained our minds, over 18 seasons during the modern explosion of the NFL: Omaha, Omaha, point here, point there, step back, step in, snap, throw a wobbly duck of a pass, complete it anyway, finish off another comeback, break every passing record out there, win a couple of Super Bowls.

We’ll never see Peyton Manning under center again. That’s still an awfully strange thing to process, given his impact on American sports. The Denver Broncos have announced that Manning is retiring; he’ll hold a press conference on Monday. (ESPN first reported Manning’s decision.) Manning leaves the NFL as one the best quarterbacks in history, if not the best: he holds the official league records for career touchdown passes (539), passing yards (71,940), combined regular season and playoff wins by a starting quarterback (200), league MVP awards (5), and single-season passing yards and touchdown passes (5,477 and 55, respectively). He holds the unofficial record for most prolific pitchman: DirecTV, Papa John’s, Sprint, MasterCard, Chicken Parm It Tastes So Good. Manning has lived in tens of millions of living rooms over the past two decades.

Manning’s career will forever be defined by his rivalry with Tom Brady, his best frenemy. Brady will haul more Super Bowls (4 and possibly counting, to Manning’s 2), and since Brady’s new-agey habits appear to be slowing down his aging process, he may catch Manning’s all-time numbers, though that still seems like a shot. Brady’s style is always easy on the eyes: smooth, fluid, a pre-natural calm. Manning’s is staccato, frantic, at times petulant: he wasn’t afraid to blame his offensive line after a playoff loss, or call his kicker an “idiot” on national television. In other words, he’s more human. Manning was always the more fun one to watch.

Sure, Manning was born into football royalty, the son of a college football legend who had some hard luck in the pros. Still, Manning often didn’t make success look all that easy. He studied the playbook like a med student, the legend goes. His work ethic was so celebrated, it became cliche. But damn if it didn’t pay off.

Despite winning a Super Bowl in his final game, Manning leaves the NFL in less than ideal circumstances, amidst a whiff of controversy. In December, Al-Jazeera America reported that a performance enhancing substance, HGH, was shipped to Manning’s wife: Manning has vehemently denied ever using it. And since Manning won the Super Bowl, the news media has reexamined a past scandal: a former athletic trainer at Tennessee, Manning’s alma mater, accused Manning of sexual assault during a 1996 incident in a training room. Manning has long characterized the incident as a “mooning:” one former teammate said it wasn’t, and another told The MMQB, a Sports Illustrated football site, he saw no physical contact between Manning and the trainer. Highly inappropriate actions of a college kid, or something much more sinister? We may never know for sure. But such incidents are part of a complex package. And though Manning was a front-man for countless brands, he didn’t seem to go out of his way to hold himself up as a moral authority.

At this point, it’s hard to remember that for years, Peyton Manning’s on-field career was tinged with disappointment. Manning, raised in New Orleans where his father Archie toiled for the hometown Saints, jilted his father’s beloved alma mater, Ole Miss, to sign on with Tennessee. Although he starred for the Vols, Manning missed out on two big ones: a national title—his Tennessee teams could never beat Florida—and the Heisman Trophy. The Indianapolis Colts considered selecting a raw talent, Washington State’s Ryan Leaf, with the top pick of the 1998 draft. Manning wound up going first, and Leaf second, to the San Diego Chargers. Leaf was a bust; Manning started from Day 1, and did not miss a start for 10 seasons.

While Brady won his first three Super Bowls between 2002 and 2005, Manning kept falling short: you’ve reached a certain level of excellence when failing to win a Super Bowl stains you. He broke through after the 2006 season, when the Colts defeated the Chicago Bears in Super Bowl XLI, in the Miami rain; Manning’s coach, Tony Dungy, became the first African-American coach in NFL history to win a Super Bowl. Then little brother Eli matched him, winning a title the next year. Peyton reached his second Super Bowl in 2010, but the New Orleans Saints defeated the Colts. In February of 2012, at Lucas Oil Stadium in Indy—the house that Peyton built—Eli passed him, as his New York Giants beat the Patriots for a second time title.

By then, Peyton’s career was in jeopardy. He missed the entire 2011 season after multiple neck surgeries. The Colts struggled so badly without him, they snared the top pick in the 2012 draft. Stanford’s Andrew Luck was too tantalizing a prospect to pass up. Manning and the Colts went through an emotional, though ultimately amicable divorce. Everyone wound up winning, which is rare in sports: the Colts got another franchise player, and Manning signed on in Denver with general manager John Elway, who knew a little something about late-career runs. Elway finally won his Super Bowls during his last two seasons. Trivia you may have forgotten: Manning supplanted Tim Tebow as Denver QB, despite Tebow’s miracle run to the playoffs.

As expected, the move was an upgrade for the Broncos. But few envisioned what followed. Manning’s best days were supposed to be behind him. In 2012, with Manning looking strange in a non-horseshoed helmet, Denver finished with the best record in the AFC. But the Broncos lost a playoff heartbreaker, at home, to the eventual champion Baltimore Ravens. (Throughout his career, Manning suffered his fair share of surprise postseason defeats). In 2013, at 37, all Manning did was break that single-season passing and touchdown record. Denver reached the Super Bowl, Manning’s third. But that game started with a Seattle Seahawks safety, after a muffed Denver snap, and just got worse for the Broncos from there: Seattle blew them out, 43-8.

Fast forward to Manning’s surreal final season. He struggled, reaching a low point in mid-November, when he threw four interceptions in a loss to Kansas City, and got benched. He then missed time with a foot injury. This was surely the end: Manning was turning in a sad final chapter. Even when Manning returned to the sideline for Denver’s last regular season game, Broncos coach Gary Kubiak started Manning’s promising young backup, Brock Osweiler. But the Broncos needed a jolt against the San Diego Chargers, and Kubiak called on the most decorated reliever in football. Denver won, and from then on, Peyton dutifully played to role of “game manager”—football parlance for quarterback who doesn’t screw up on offense, and lets his defense win. Though no longer an all-time player, Manning won that elusive second ring, tying Eli, and giving us a comedic gem: Eli looking distraught that his one bragging right on an accomplished older sibling vanished in the Santa Clara night. So many families could relate. (Though Eli said he wasn’t jealous, just concerned about game strategy). Manning, who will turn 40 in March, knew when to call it quits: with a win, on top though a shell of himself, in position to help his team save $19 million in salary cap space and build for the future.

Peyton Manning played his first game on September 6, 1998, at the height of Bill Clinton’s presidential sex scandal, right before Michael Jordan was about to officially leave the Chicago Bulls. He departs in the last days of Obama, during Donald Trump’s run for president. The NFL was plenty big when Peyton arrived, but Jordan’s NBA, in particular, loomed large. During Manning’s 18 years in the league, however, the NFL won top dog status in American sports. We learned a ton about the game’s safety risks. The NFL endured its share of devastating scandals. But Americans kept falling for the sport. The technology that delivers the product to more and more customers, and the fantasy games that keep millions invested, literally, in Sunday afternoons have played their part. But so has Peyton Manning. Omaha, Omaha. He’ll be greatly missed. 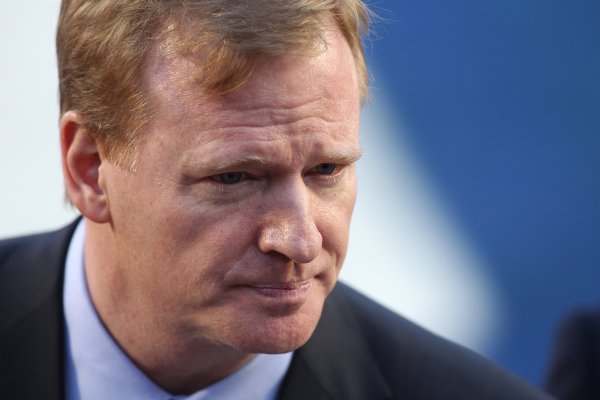 The NFL Still Won't Tackle Brain Trauma at the Super Bowl
Next Up: Editor's Pick