At the annual Gridiron Dinner, Republican front-runner Donald Trump was on the menu.

The billionaire found himself the center of bipartisan needling Saturday night at the 131st running of the Washington, D.C. institution, featuring politically-charged musical numbers and lawmaker roasts. Trump, who was not in attendance, bore the brunt of jokes from Vice President Joe Biden and South Carolina Gov. Nikki Haley, a Republican, as well as identical brothers Julián and Joaquin Castro, who delivered remarks at the white-tie event.

“Even though I gave the [State of the Union] response, I won’t really feel like I made it until Donald Trump demands to see my birth certificate,” Haley quipped at the start of her remarks. Joking about a visit to Trump’s ‘understated’ office in New York, Haley added, “I couldn’t get there now with the new ban on brown people at Trump tower.”

Adding that Trump had criticized Sen. John McCain for being a captured prisoner of war, Biden referenced the much-mocked Trump press conference featuring a dour New Jersey Gov. Chris Christie, saying, “Tonight I call on Donald trump to be a man of his word and release Chris Christie now. It’s not right. It’s simply not right.”

Haley, who is endorsing Florida Sen. Marco Rubio, didn’t spare her preferred candidate from her jokes. “When I endorsed Marco everyone assumed I cut a deal. We did. He promised I could borrow those boots,” she said. She also joked at the troubled state of her party, which is on the cusp of nominating Trump.

“Reince Priebus, who I saw earlier, used the RNC to control the debate so they didn’t damage the Republican brand,” Haley said as the audience laughed. “Heckuva job, Priebus.”

The Castro brothers, who took the podium briefly wearing fake beards and holding cigars, joked they were making an endorsement as the Castro brothers from Cuba—Fidel and Raul—”We’re endorsing Comrade Bernie Sanders.”

Referencing CBS President CBS CEO Les Moonves’ comments that Trump’s candidacy was good for the network, if not for America, the Castro brothers quipped, “Trump on stage with Christie, that’s basically ‘Two and a Half Men.'”

The brothers found themselves the target of Haley’s humor, when she invoked retired neurosurgeon and GOP candidate Ben Carson, as well as Trump’s debate comments. “Didn’t Ben Carson do a great job separating them,” Haley said. “Earlier I heard Joaquin bragging he has bigger hands.”

Biden also had harsh words for GOP candidate and Texas Sen. Ted Cruz, who is famously disliked by most of his Republican colleagues in the Senate. “I told Barack if you really want to remake the Supreme Court name Ted Cruz nominee—before you know it you’ll have eight more vacancies,” Biden said.

He added, referencing Rubio’s famous debate repetition, that after creating record jobs and providing millions with health insurance, “Barack Obama did know exactly what he was doing.”

The annual dinner includes skits featuring the organization’s member journalists, which included a send-up to the Trump border wall, Ted Cruz’s Canadian birthplace, and Joe Biden’s perpetual flirtations with a presidential run. One of the group’s tenets is to “singe, but not burn” in its humor, which features the backing of the Marine Corps Band. 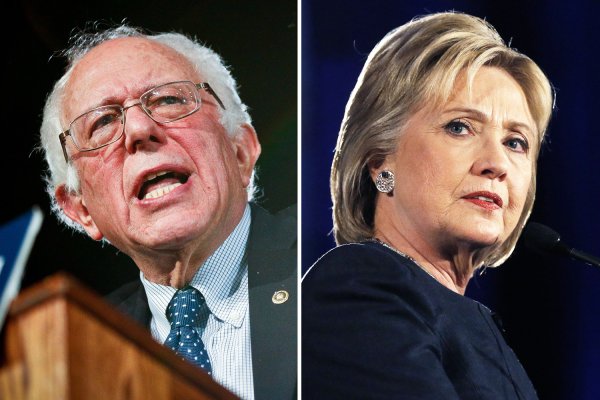 How to Watch Tonight's Democratic Debate In Flint
Next Up: Editor's Pick