Republican front-runner Donald Trump has gotten the better of most of his presidential rivals at the 11 debates held so far. But on Thursday, he faced his toughest opponent: moderator Megyn Kelly.

Trump first tangled with the Fox News host at the first debate in August, when she challenged him on some of the rhetoric he’s used towards women. Two days later, he said in an interview that she was out to get him and had “blood coming out of her wherever,” then threatened to boycott further debates with her, sitting out a debate in January.

The first interaction between the two since then came at Thursday’s debate, and it got off to an icy start when Trump acknowledged Kelly’s presence with a steely “you’re looking well.” About halfway through the debate, Kelly asked Trump to answer for several instances where he changed his positions on key issues.

“One of the things people love about you is that they believe you tell it like it is,” she said. “But time and time again in this campaign, you have actually told the voters one thing only to reverse yourself within weeks or even, sometimes, days.”

She then presented a three-part video showing him contradicting himself on Afghanistan, on whether to allow refugees from the Middle East and on whether George W. Bush lied about weapons of mass destruction before the Iraq War. Trump explained only his inconsistency on Afghanistan, then attempted to move on, but Kelly insisted that “there are several examples” and asked him to address the other two issues.

“The point I’m going for is you’ve changed your tune on so many things, and that has some people saying: what is his core?” she asked.

“If you’re gonna be one way, and you think it’s wrong, does that mean the rest of your life you have to go in the wrong direction because you don’t want to change?” he continued.

Over the course of his answer, he also mentioned “an interview with a great friend of mine, and yours, Howard Stern”—a thinly veiled reference to Kelly’s 2010 interview with Howard Stern in which she discussed her breasts and her sex life with her husband, which many Trump defenders cited in the wake of their previous dispute.

Read More: Megyn Kelly: How to Deal With the Haters

Shortly afterwards, Kelly aggressively question Trump about the Trump University lawsuit, in which former students are suing Trump for their money back after the Better Business Bureau gave Trump University a D- rating. She also noted that a judge had compared Trump to Bernie Madoff running a Ponzi scheme.

Kelly isn’t running for president, but she seems to be the only person able to effectively land a blow on Trump, mostly because she uses his own words against him. While Cruz and Rubio whined about Trump’s conservative credentials, Kelly presented Trump (and the viewers) with his own statements, and asked him to explain himself.

Trump doesn’t listen to the Republican Establishment, or to rivals like Cruz or Rubio or Kasich, or to other debate moderators. But even Trump can’t ignore Trump. 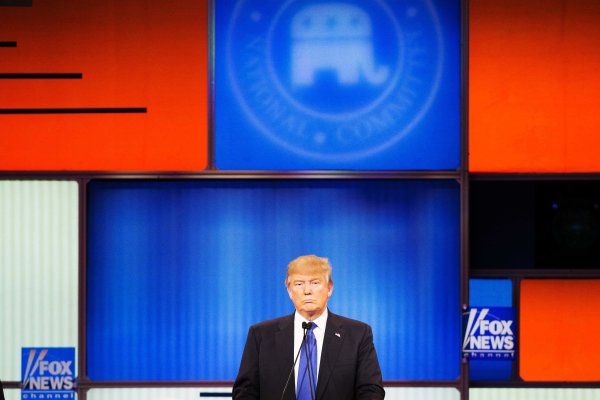