Europe to Economic Migrants: Your Journey Will Be 'All for Nothing'

Refugees scramble for registration papers at the Greek-Macedonia border on March 3, 2016, in Idomeni, Greece
Dan Kitwood—Getty Images
By Simon Lewis

Europe’s top official has warned potential economic migrants not to come to the continent, telling them bluntly that their journey would be “all for nothing.”

European Council president Donald Tusk made the comments as attitudes harden against migrants, many of whom who have traveled in search of a better life along with refugees fleeing conflicts in Syria, Afghanistan and Iraq.

Following a meeting in Athens with Alexis Tsipras, the Prime Minister of Greece — one of the countries bearing the brunt of the influx — Tusk made the appeal to “all potential illegal economic migrants,” the BBC reports.

“Do not come to Europe,” he said. “Do not believe the smugglers. Do not risk your lives and your money. It is all for nothing.”

The U.N. has warned that Europe is on the brink of a humanitarian crisis, as migrants and refugees continue to arrive via boats across the Mediterranean. On top of more than 1 million people who made the journey last year — the majority from war-torn states, but some also fleeing economic hardship — about 130,000 people disembarked in Greece and Italy in the first two months of 2016, according to the International Organization for Migration.

Countries along migration routes have stepped up efforts to stem the tide by setting higher criteria for granting entry to refugees. People trying to cross by land from Greece into Macedonia have clashed with authorities. 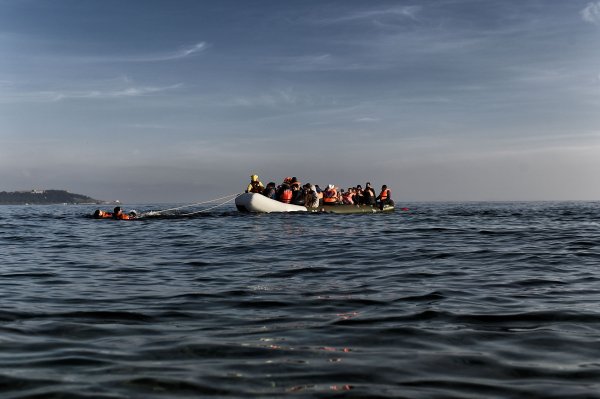