On Thursday, the South Dakota House of Representatives failed to override the governor’s veto of a “bathroom bill” which would have required public school students to use facilities based on their “chromosomes and anatomy” at birth. The override vote in favor of the bill fell some ten votes short of the required two-thirds majority, with 36 yeas, 29 nays and five members not voting.

The vote came two days after Republican Gov. Dennis Daugaard vetoed the bill amid heavy opposition from LGBT rights groups. In rejecting the measure, he argued that issues regarding gender and facility use at public schools are best handled locally by the schools, rather than statewide legislation that would likely open up schools to lawsuits.

Critics, who ranged from nationwide advocacy groups like the Human Rights Campaign to tourists who said they were canceling trips to the state, believed the bill unfairly targeted transgender youth—essentially banning transgender girls from using girls’ facilities and likewise for transgender boys. Controversial “bathroom bills” have caused uproar in states around the country in recent years, including Arizona, Kentucky and Maryland. The Department of Justice has repeatedly expressed that denying transgender children or adults access to the facility that aligns with their gender identity is a form of sex discrimination under Title IX.

“As policymakers in South Dakota, we often recite that the best government is the government closest to the people,” Daugaard said in a statement accompanying his veto. “Local school districts can, and have, made necessary restroom and locker room accommodations that serve the best interests of all students, regardless of biological sex or gender identity.”

While the governor called controversial incidents regarding bathroom use “rare,” one lawmaker arguing for the House to override the veto described transgenderism as a “virus that has broken out” across the nation, arguing that being transgender is a choice, and a bad one that will make children suicidal. “When you feed the fire of this kind of confusion,” said state Rep. Steven Haugaard, “you’re going to add to the number of people who are going to make this choice.”

Medical experts widely recognize the phenomenon of gender dysphoria, a situation in which a person’s physical characteristics do not match their innate sense of gender. Groups such as the American Academy of Pediatrics wrote an open letter expressing “deep alarm” about such bills to all the nation’s governors during the debate over the South Dakota measure: “All of our nation’s children deserve equal protections and treatment in their classrooms.”

The original sponsor of the bill, Rep. Fred Deutsch, urged colleagues to sustain the governor’s veto, saying there was no way the measure would pass the Senate and they should “allow this bill to die a dignified death in this chamber where it originated.” State rep. Karen Soli, a Democrat, also argued against overriding the veto, saying the legislation was “neither wise nor necessary.”

“We do not need to single out [transgender students], we need to figure it out and let the people who are closest to the situation do that,” Soli said.

Before the bill became the subject of nationwide news coverage, it passed the House with a super majority that would have sustained the override on Thursday.

As battles over other laws that affect the LGBT community heat up around the nation, governors beyond South Dakota have found themselves at odds with their state’s legislators and business communities. The Atlanta Journal Constitution reported on Thursday that Republican Georgia Gov. Nathan Deal criticized the current version of a “religious freedom” bill that has passed both chambers. Critics believe the measure would allow individuals and organizations to deny service to LGBT people based on moral beliefs.

On Thursday, he said he would reject any bill which “allows discrimination in our state in order to protect people of faith” and made a Biblical case for his position.

“What the New Testament teaches us is that Jesus reached out to those who were considered the outcasts, the ones that did not conform to the religious societies’ view of the world,” Deal said, according the the Journal Constitution. “We do not have a belief in my way of looking at religion that says we have to discriminate against anybody. If you were to apply those standards to the teaching of Jesus, I don’t think they fit.” 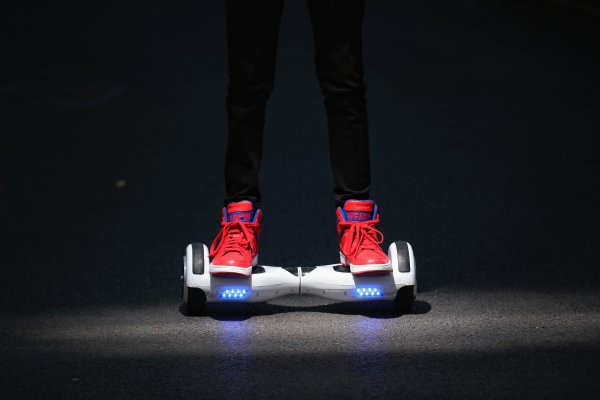 Texas Man Escapes on Hoverboard After Shooting Driver
Next Up: Editor's Pick