How You Could Get Hit With a Surprise Medical Bill

Almost exactly a year ago, John Elfrank-Dana, a 58-year-old father of three, slipped on the steps of a New York subway, slammed his skull on the metal and concrete, and was launched into what can only be understood as the seventh circle of modern medical billing hell.

As a public school teacher in New York City, Elfrank-Dana gets his medical insurance through the district’s Emblem plan. He pays a small premium each month and, like the rest of us, thought that meant he was covered in the event of an emergency. He would pay his deductible—and the insurance would pick the rest, right?

But that, Elfrank-Dana quickly discovered, is not how it actually works.

Five weeks after sustaining that head injury, Elfrank-Dana started feeling dizzy, checked into the nearest emergency room in Bergen County, New Jersey, and was rushed in for a craniotomy, a surgical procedure that removes part of the skull. After that, the hospital visits started piling up. He was treated for a fistula, then another surgery to drain the blood from his head again, then a series of appointments to address a brain infection related to the original craniotomy. It just never ended.

At one point in that nightmare, the medical bills started rolling in. A few thousand here. Ten thousand there. Twenty-two thousand more. By end of the year, Elfrank-Dana was staring down roughly $106,000 in medical bills. And none of it was covered by his insurance.

“My insurance had made payments to the hospital and anesthesiologist but it was a fraction of what they were asking,” Elfrank-Dana told TIME recently. “So they started going after me for the balance.”

While Elfrank-Dana didn’t know it at the time, he had become the latest victim of what is known, aptly, as “surprise medical bills.” They arise when what an insurer pays a provider doesn’t match up with what a doctor, physicians’ group or out-of-network hospital actually charges. It happens all the time.

This week’s TIME magazine has a feature, “The Hidden Cost of Surprise Medical Bills,” describing the problem, its causes, and solutions, an includes more stories from people like Elfrank-Dana. Here’s the Cliff’s Notes version.

Surprise medical bills happen most often when a hospital contracts with medical providers—including doctors, surgeons, anesthesiologists, lab technicians—that do not accept the same insurance plans that the hospital does. That means that patients, like Elfrank-Dana, can walk into an in-network hospital, see an in-network doctor, and suddenly find himself on the hook for thousands of dollars anyway, just because he inadvertently received care from a provider, such as a lab technician or physician, who was out-of-network.

Surprise medical bill are especially common in emergency rooms and surgical theaters. Often, a patient will go in for a procedure with an in-network surgeon at in-network hospital, but then wake up from anesthesia to discover that, at some point, an out-of-network physician had popped into the room to provide a consultation or help with the surgery. And when that happens? Boom: the patient receives an out-of-network bill.

The whole problem of “surprise medical bills” arises from the convoluted way that medical billing works in this country. As it is, an insurance company, like Emblem or Blue Cross Blue Shield, negotiates a set of repayment rates with hospitals and medical providers, which they then list as “in network.” If a hospital or physicians group refuses to accept the insurance company’s repayment rates—often because they’re too low—then those providers are listed as “out-of-network.”

But here’s where it gets complicated. Often times, an insurance company will successfully negotiate with a hospital, but the hospital will then turn around and sign a sole contract with a group of, say, anesthesiologists or surgeons, who do not accept that same type of insurance.

That puts the patient in the awkward middle. A patient’s insurance covers all in-network costs after the patient reaches his deductible, but meanwhile, the patient himself is receiving bills from any and every out-of-network provider that contributed to his care. In many cases, insurance plans pay just a small percentage of such out-of-network bills, or nothing at all.

Obamacare was supposed to fix these sorts of problems, and the 2010 law does go part of the way there. But it leaves open two big loopholes.

The first has to do with emergency medical care. Under Obamacare, Americans don’t have to worry about whether the nearest hospital is in-network or out-of-network. During medical emergencies, insurance companies are required to bill patients as if the hospital where they end up is in-network, even if it’s not. That means that if a patient usually pays a 20% co-pay for care at an in-network facility and 80% for care at an out-of-network facility, the insurers must abide by the 20% in-network co-pay.

That’s a huge step in the right direction, but it still leaves patients wide open to surprise bills. After all, there’s nothing stopping any out-of-network medical provider at that hospital, including emergency room doctors, from sending patients a separate bill later, charging them for whatever their insurance company didn’t cover. That’s what happened to Elfrank-Dana.

The second issue has to do with the total amount that patients can be charged out-of-pocket. Under Obamacare, insurers are required to cap out-of-pocket payments at $6,850 (and $13,700 for families). Again, that’s progress. But those caps only include in-network care. If a patient like Elfrank-Dana reaches the $6,850 cap, but then receives $80,000 in surprise, out-of-network bills, after leaving the hospital, then, well, he’s out of luck.

The big question on most people’s mind is who’s to blame. And the answer is a political hot potato: if you pass a law that prohibits saddling patients with “surprise bills,” then someone else is going to be on the hook. And that someone else will be one of the three most powerful players in the American medical industry: insurance companies, hospitals and the physicians lobby. None of them want to be left holding the bag.

Jay Kaplan, the president of the American College of Emergency Physicians, says his heart goes out to patients, who he and his association work with on a person-to-person basis. “We want patients out of the middle as much as everybody does,” he told TIME recently. He puts the onus on insurers to offer higher reimbursement rates, in order to include more providers in-network. “Insurance companies use their own black box database to determine how much they’re going to repay physicians,” he says, and often times, those reimbursement rates are just not enough for doctors to accept them.

Tom Nickels, an executive vice president of the American Hospital Association, agrees: it should be the insurance companies that pay more, expand their networks, and eliminate the problem.

Insurance companies, meanwhile, say that’s not realistic. Insurers already offer medical providers reimbursement rates that are as high as possible, while keeping costs for consumers—you, me, our employers—are low as possible, said Clare Krusing, who represents America’s Health Insurance Plans. If insurers began paying doctors and hospitals as much as they asked for, insurance premiums would spike.

“Providers that choose not to participate in a network plan have a variety of reasons, the main one being that they want to charge higher rates for their services,” Krusing told TIME. “When you have a pricing structure like that that, patients are being asked to write a blank check.”

A year after his accident, Elfrank-Dana says his billing saga continues. His insurance company and the surgeon at the New Jersey hospital eventually reached a settlement totaling about $56,000, but he’s still on the hook for roughly $50,000 more for both the hospital bill and the anesthesiologist. He recently got help from a consumer rights advocate and a billing secretary at a New York-based hospital, both of whom are “coaching him,” he says, on how to fight the charges. Despite two brain surgeries, Elfrank-Dana said that by last September, he started firing off one letter a day.

“It’s so hard figuring out who’s the bad guy,” he added. “I know some people who take out a second mortgage to pay for these kinds of bills. For me, if I paid these bills, it would deplete my college savings for my kids. And I was saving for half of state school tuition for three kids. That’s the opportunity cost here. It makes me all the more indignant.” 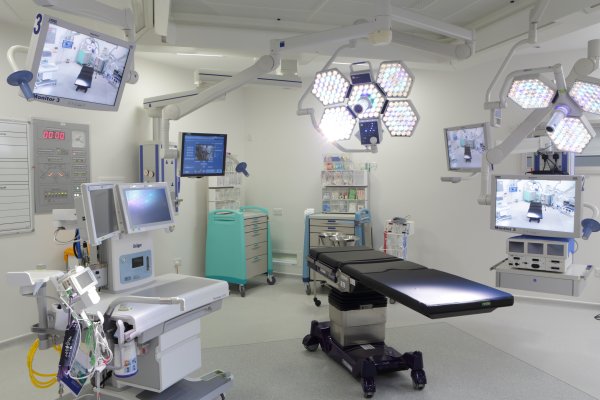