These 5 Facts Explain the Good News About Africa

A cyclist stops to make a mobile phone call on a newly surfaced boulevard at the Eko Atlantic City site, developed by Eko Atlantic, near Victoria Island in Lagos, Nigeria on Feb. 12, 2016.
George Osodi—Getty Images
By Ian Bremmer

It was just a couple of years ago that “Africa Rising” was a hot story, as a continent best known for tragedy gained attention for rapid economic growth and real hope. The slowdown of the global economy and slumping commodity prices have dampened that enthusiasm a bit, but there are still positive longer-term trends across Africa that deserve attention. These five stats tell some of those stories.

1. Promising Demographics
As I’ve detailed before, demographics are destiny. That may well prove good news for Africa, which will account for more than half the world’s population growth by 2050. By 2100, the continent’s population will have quadrupled relative to today. At a time when much of the developed world’s workforce will be shrinking, Africa’s will be expanding.

And Africa needs this population boom—for every 100 Africans of working age today, there are 80 children/elderly that depend on them for support. This figure, known as the “dependency ratio”, is high; the global average for 100 workers is 53.9 dependents. If birthrates continue to fall, Africa should reach a more sustainable level of 100:60 workers-to-dependents by 2055. Of course, if the Arab Spring taught us anything, it’s that having a bulging youth population without creating decent jobs is a formula for real trouble.

2. Growing Middle Class
Fortunately, Africa is making progress on the economic front. Africa’s urbanization rate is already at 37 percent, comparable to China’s and larger than India’s. It’s expected to be the fastest urbanizing region from 2020 to 2050. Over the last decade, real income per person jumped 30 percent after shrinking 10 percent in the preceding 20 years. Extreme poverty remains a problem though: Of the regions where data is available, sub-Saharan Africa has the highest proportion of people living in abject poverty at 35.2 percent, but that figure stood at 42.6 percent just three years ago. Today, one third of the continent is considered middle class according to the Africa Development Bank, spending between $4 and $20 a day. By 2060, more than a billion Africans are expected to join them.

3. Financial Inclusion
But earning more money isn’t enough. Access to credit remains low in sub-Saharan Africa, where just a third of the adult population has a bank account. Here, the rise of mobile banking offers a lot of promise. In 2011, just 42 percent of Kenyans had access to bank accounts, but by 2014, 85 percent were using mobile money transfers. Some $23 billion was transferred via mobile over the course of the year, equal to 42 percent of the country’s GDP. And it’s not just a payment tool. New innovations including Kenya’s M-Shwari—a collaboration between the Commercial Bank of Africa and mobile network Safaricom that enables Kenyans to quickly open mobile money accounts complete with interest and deposit insurance—offer loans to budding entrepreneurs and the ability to save safely. In Cote d’Ivoire, Somalia, Tanzania, Uganda and Zimbabwe, more people have mobile money accounts than bank accounts. Just as geography and lack of funding for infrastructure led many African countries to skip landlines and go straight to mobile phones, technology has also enabled Africans to leapfrog decades of financial development in just a few years.

4. Strengthening Civil Society
Technology has also made its mark on Africa’s politics. Just 9 percent of people across the continent currently use social media, but this small minority has made good use of it. Look to Nigeria, Africa’s most populous country. 2011’s #OccupyNigeria strike demonstrated how effectively social media could capture social discontent and channel it into real action. 2015’s #BringBackOurGirls campaign went viral and brought Nigerian security issues to the global forefront. But social media’s greatest contribution to African political life is in ensuring that democracy functions as advertised.

Historically, African elections have been “stolen” according to the old principle that it’s not who votes that counts but who counts the votes. As results from Nigeria’s 2015 election began trickling in, volunteers at polling precincts tweeted unofficial vote counts under the #NigeriaDecides handle, helping ensure transparency throughout the vote-tabulation process. The result? Power was transferred peacefully to Muhammadu Buhari, the first opposition candidate to win a free and fair presidential election in Nigeria. That may be why Yoweri Museveni, Uganda’s recently re-elected strongman, shut down WhatsApp, Twitter and Facebook on polling day. There’s a reason he’s been in power for 30 years. Transparency in that country will take a little longer.

5. Fewer Civil Wars
Maybe the best development in Africa though is the falling number of civil wars and violent coups. Since the cold war ended, the number of armed conflicts on the continent has fallen from more than 30 to about a dozen today. Organized violence still plagues the Democratic Republic of Congo, Central African Republic, Somalia and South Sudan, but the risk that war will metastasize to neighboring countries is not what it was.

Other forms of violence remain a problem. In 2014, 11,934 Africans were killed in terrorist attacks, a 250 percent increase from the previous year. Nigeria’s Boko Haram (aligned with ISIS) and Somalia’s al-Shabab (affiliated with Al Qaeda) have been particularly brutal. But managing the threat from Islamic militants gives African governments more in common with Europe and the United States, increasing opportunities for mutually profitable cooperation. That’s progress.

(The Economist, Vision of Humanity) 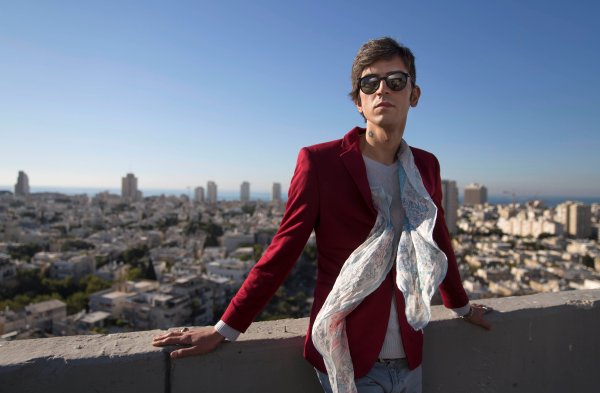 Meet the Gay Iranian Poet Who Has Taken Refuge in an Unlikely Place: Israel
Next Up: Editor's Pick