Donald Trump listens as Michael Sexton introduces him at a news conference in New York where he announced the establishment of Trump University on May 23, 2005.
Bebeto Matthews—AP
By Ryan Teague Beckwith

Republican front-runner Donald Trump is once again arguing that students at his defunct Trump University had a “98 percent” approval rating, but that number would’t pass muster in a freshman statistics course.

Faced with attacks from TV ads as well as former GOP nominee Mitt Romney over the classes, Trump said on MSNBC’s “Morning Joe” Thursday that students of his real estate program were satisfied, despite an ongoing legal battle.

“They’re spending now $100 million on negative, phony ads on Trump University which, by the way, has at 98 percent approval rating by the students that took the course—98 percent,” he told host Joe Scarborough. “That’s why I won’t settle the case.”

But as Steven Brill wrote in TIME in November, those numbers don’t add up. In a sworn deposition, director of operations Mark Covais conceded that nearly a third of students who took three-day seminars from Trump’s instructors demanded and received refunds before Trump University changed its policy.

In a separate case, a judge in the U.S. Court of Appeals for the Ninth Circuit rejected a line of argument from Trump’s lawyer that a disgruntled student had once praised the program. Explicitly comparing Trump University to the kind of Ponzi scheme run by Bernie Madoff, Judge Kim McLane Wardlaw wrote that “victims of con artists often sing the praises of their victimizers until the moment they realize they have been fleeced.”

“His promises are as worthless as a degree from Trump University,” he said. “He’s playing the American public for suckers: He gets a free ride to the White House and all we get is a lousy hat.”

Republican critics of Trump are hoping to turn the program’s fate into further attacks against Trump. Ads released by the American Future Fund, a nonprofit that backed Romney in the 2012 campaign, feature former Trump University students. A separate ad from Our Principles PAC, a super PAC backed by the family that owns the Chicago Cubs, also criticizes the program. 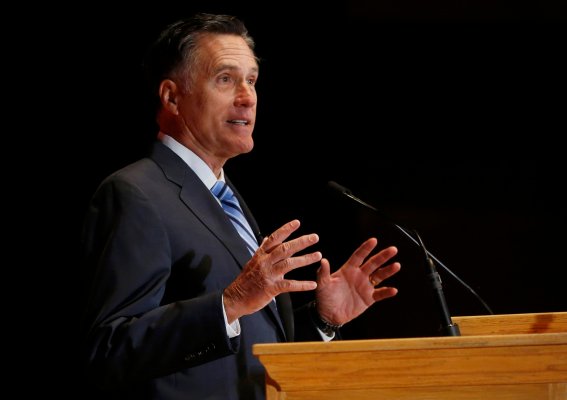 Romney Calls on Republican Voters to Stop Trump
Next Up: Editor's Pick