What a Year of Racial Strife Has Taught Bernie and Hillary

In the past year, the African-American community has sent the nation a powerful message about how to react to violence–and the difference between Hillary Clinton and Bernie Sanders can be found in how each received that message. Clinton’s response is especially important because it is different from the way she reacts to most things. It is emotional rather than policy-oriented. It is about suffering more than grievance. It floats on the deep rivers of pain and forgiveness in the black community. In her South Carolina victory speech–one of her best this year–she cited an African Methodist Episcopal reverend who had asked, “‘How, how are we ever going to strengthen the bonds of family and community again?’ Well, we’re going to start by working together with more love and kindness in our hearts and more respect for each other, even when we disagree.”

By contrast, Sanders–who has run an admirably substantive campaign–has reacted the way white left-liberals too often do: by embracing grievance as the sole, defining reality of the black community. Confronted early on by Black Lives Matter activists, Sanders quickly adopted their anger–but nothing more. The references to African Americans in his speeches are limited to well-known problems: unemployment and incarceration. This has appealed to the familiar class of showbiz socialists and hipster academics who’ve endorsed him: Cornel West, Spike Lee, Killer Mike. But it lacks the music of the black church, ignores the pride in the community over its relatively high college-graduation rates, especially among black women–and, above all, the amazing grace displayed by the families of the Charleston church shooting victims.

This is a problem that ideologues have. They see the world theoretically. Sanders, it can now be said, is the most successful leftist candidate since the socialist Eugene V. Debs, perhaps the most successful in American history. But that’s still not very successful. His sense of the world was confirmed in the idyllic latte lands of Vermont, far from the inner cities. His theories have some basis in fact–especially his theories about the aggrandizement of the financial sector over the past 40 years–but they are simpler than real life.

Sanders posits a binary system of oppressors (billionaires) and the oppressed (the rest of us). There is no room in his world–and certainly none in his speeches–for the small-businesspeople who create most of our jobs and anchor our communities. He has nothing to say about the tide of federal regulations that have made their lives more difficult. The only jobs he discusses are those that can be created by government–infrastructure jobs, more teachers, more early-childhood caregivers. And while a 21st century infrastructure is important, it can’t be created without the prosperity that free enterprise brings. Needless to say, he never talks about government’s ability to deliver on his promises–about the inherent inefficiencies of unaccountable public monopolies. As a former chair of the Senate Veterans’ Affairs Committee, he is as responsible for the VA mess as anyone. (In fairness, Clinton is also clueless about how to fix corroded federal bureaucracies–or pretends to be.)

Sanders’ devoted legions–who, rightly, see an honest man, free from the pretenses of politics–have affixed a lovable curmudgeon persona onto a curmudgeon who isn’t so lovable. Sanders’ speeches are free of anecdote. He rarely tells stories about individuals he’s met along the way. The closest thing to an “individual” in his standard stump is Goldman Sachs, the investment bank, which has gotten away with something approaching murder in the wake of the housing collapse. His usual speech is about twice as long as most stumps–filled with facts and suppositions but not much humor or humanity.

There is also the problem of “rights” that Sanders claims for the people–health care is a right, not a privilege; free college education is a right–but these rights are granted without demanding any reciprocal responsibilities. Surely, if we’re going to give middle-class kids a four-year college education, they owe something in return–some form of service, perhaps–and if we are going to give unwed mothers food stamps and housing and day care, they owe us some standard of civic responsibility too.

Clinton doesn’t talk very much about responsibility either, but unlike Sanders, she has come to see that the most important transactions in a democracy aren’t exclusively financial. Her dependence on the black church–the single most important institution in her quest for the nomination–has softened her. She has been made humble in the face of its glory. 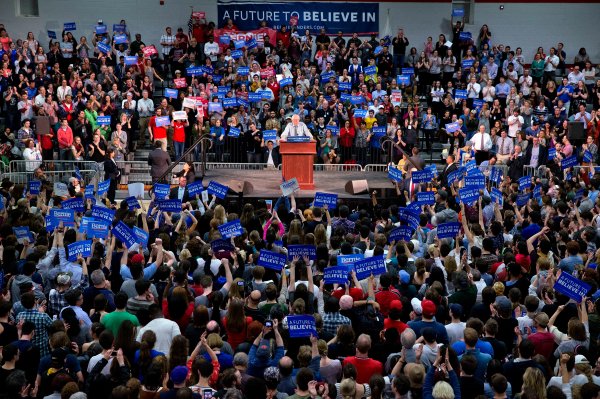 Could Bernie Sanders’ Campaign Spawn a Liberal Tea Party?
Next Up: Editor's Pick