In his long career as a real estate developer, casino mogul, and all-around promoter, Donald J. Trump has had a finger in every business from selling ties and perfume to running an airline. But for his latest line of work—aspiring leader of the free world—some of his most useful lessons came courtesy of his stints as a boxing promoter. He explained it all when a TIME reporter interviewed him aboard his private jet on the eve of Super Tuesday for a cover story available to readers here.

“A great fighter, when he goes into someone else’s town, he knows that the judges are going to be against him,” Trump mused. This is how he feels as a political outsider trying to beat the other Republicans on their home turf.

“So how does he take the judges out of it? A knockout. You knock the other guy out, it doesn’t matter what the jury thinks.”

And what constitutes a knockout in politics?

Another lesson from the boxing world might account for Trump’s most famous feature: the miraculous feat of follicular engineering that is his cantilevered comb-over.

How so? Trump was discussing the power of high TV ratings when the TIME reporter asked about the billionaire’s knack for grabbing the attention of audiences. Trump replied with a story about Don King, the legendary boxing promoter best known for his finger-in-a-light-socket hairdo. “It’s a lot about the look,” Trump said. “You understand? Don King is a friend of mine. He told me once, ‘You have the look.’ ”

“Are you saying what I think you’re saying?” the reporter asked. “Every time someone criticizes your hair, they’re playing right into your hands?”

For much of the flight, Trump chatted while watching wall-to-wall coverage of his campaign on the in-fight satellite television. Surprisingly soft-spoken in person, he nevertheless kept up a steady critique of the talking heads. A CNN reporter described Trump as visibly “disturbed” at a rally in Virginia, where successive protests interrupted his punchlines.

“They said Trump was really disturbed by it,” Trump repeated. “That’s a phony report. We had a good time with it.”

“This is just phony reporting,” he groused.

“I disavowed him five times,” Trump protested. “How can she say that? You know, I find reporters so dishonest. I mean, it’s amazing how totally inaccurate reporters are. How can she say I refused to disavow it when it’s on Twitter, it’s on Facebook?”

At last, Trump crossed the cabin to the cluster of seats where his traveling staff was at work, and asked them to contact the networks for corrections. With that, he dropped the matter, and turned from media criticism to politics.

“It’s going to be the biggest turnout in the history of the country,” he predicted of the general election in November.

Yet the election is not the only competition on Trump’s mind. He left the strong impression that he’ll be watching to see how another celebrity politician, former California governor Arnold Schwarzenegger, will fare as his replacement on “Celebrity Apprentice.”

“I would still be on it if I was not doing this,” Trump said, noting that he continues to hold a financial stake in the long-running reality series. “We got Arnold Schwarzenegger instead, and he’s going to be great—big movie star, governor of California. He’ll be great.

And Trump reminisced about his relationship with another celebrity: the late King of Pop, Michael Jackson. Pulling an 8-by-10 glossy photograph from a stack of papers, he handed it to the reporter. It showed the two of them together. “I was one of his closest friends,” Trump said. “We met at Madison Square Garden. He was at his peak then. It was right after the ‘Thriller’ album, and I happened to be there and he heard about it and wanted to meet me.

“He was alone in his dressing room, sitting on a trunk, just sitting there. There were about 100 people waiting outside, wanting to get in to see him, but he didn’t want to see anybody. Only me. I went in and we talked and became friends. Not the 15 minutes thing, 15 minutes of fame. Real friends.

“He was killed by plastic surgery,” Trump continued. “Right there in that picture, he’s perfect—he shoulda stopped there. But he couldn’t stop. He wanted to look like Cary Grant, you know that? He thought Cary Grant was the most perfect face. They don’t make them like that any more, Cary Grant, Clark Gable.

“But what a talent. Mikhail Baryshnikov—you know him? Baryshnikov told me that none of the dancers in the New York City Ballet could moonwalk like Michael. They tried, but none of them could do it.” 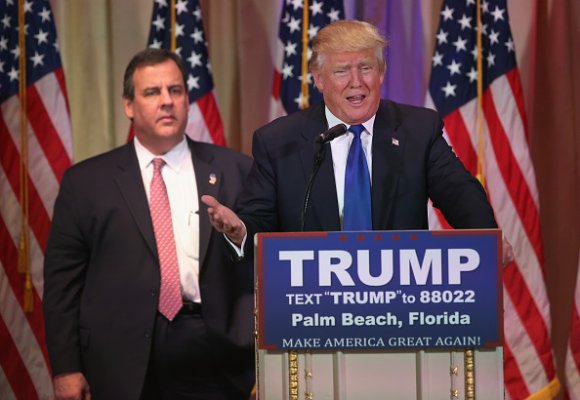 Inside the Republican Plan to Stop Trump
Next Up: Editor's Pick