Trump Is Extremely Articulate—That's Why He's So Dangerous

Donald Trump seems almost deliberately designed as a nightmare figure to turn an American election upside down, for two main reasons. One of them, believe it or not, is that he is extremely articulate.

Oh, not in the conventional way. As Dana Milbank has noted, often Trump speaks on a level that testing identifies as comprehensible to a second-grader. However, this essentially means that Trump is the most colloquial of our current crop of candidates, and the colloquialism can be quite the narcotic on the stump.

The difference between casual speech and writing can be vaster than we tend to think. The two are almost different languages at times. Talking is all about short sentences and sprinkled interjections. Even an educated person’s typical sentence gets no longer than nine or 10 words. Talking—as in, just talking—is subjective rather than objective the way writing often tries to be. Casual talk involves a great deal of repetition: rare is the person who says everything just once in animated conversation. Then, casual talk makes single points, not extended arguments.

Think of all of that in light of a typical Trump speech (thanks to Mark Liberman at Language Log for the transcription) in Grand Rapids last year, where he was presenting a hypothetical scenario in which he is President and beholden to donors, as he is proud to say he would never be:

This is the way you talk over beer (or under the table), and key to Trump’s appeal is that he speaks this way for the public record. It’s no accident that he is so fond of Twitter with its 140-character limit and the implied exemption from serious thought.

However, this way of communicating is not only entertaining but persuasive. It is much of why he has made such headway and will continue to. Trump talks the way humans evolved to talk. Writing, formal speeches and $10 words are something we, past second grade, learn to listen to and learn from (or at least pretend to). Trump takes us back to basics—back to the way more of us probably wish public figures spoke than we’d like to admit. So much of Trump talk, for example, isn’t even sentences in the technical sense: observe the italicized sequences:

There’s a theory that early humans spoke in what linguist Ljiljiana Progovac titles “proto-syntax,” with choppy utterances like “Him, the leader??” and “Game over!” Trump’s public speech dwells more liberally in this Cro-Magnon substrate than one might expect—and for a lot of people it has the same narcotic effect that makes so many people find gorillas so cool. Colloquial comes off as, like gorillas, real. It sounds sincere—just as Obama’s “Yes, We Can, intoned in a black preacherly cadence, sounded “real” in a way that it never would have from John McCain. Note also that Trump could almost get away with adopting that slogan in his own barstool intonations.

Yet we must be under no impression that Trump is some kind of linguistic Godzilla—he isn’t coming out of nowhere in the way he communicates in public. He is part of an America that has gone ever more “cazh” when it comes to public language since the 1960s. In 1890 W.E.B. DuBois introduced himself to a writing teacher with “I have something to say to the world and I have taken English twelve in order to say it well,” already writing on a level most of us would consider celestial—in his era, to be read or heard, advanced composition was de rigueur. In our times, the SAT no longer has word analogies because they’ve been deemed irrelevant to intelligence and generally elitist. Trump talk is a predictable manifestation of the pathway from 1890 to 2016. To Trump the idea of saying anything “well” would be beside the point.

However, the alarming thing about Trump’s linguistic power—or antipower, as it were—is that it makes his racist biases go down easier. Among blue Americans it is fashionable to charge that Trump’s fans are as racist as he is and that they love him for venting their own feelings. However, it is its own kind of discrimination to blithely caw that all people “out there” are bigots. Just as plausible is an issue of priority. Trump’s speaking style sounds, fundamentally, sincere. When someone talking that way promises to work for people struggling in a new economy, for those people it trumps, as it were, any floutings of propriety regarding race and how one is to talk about it.

Observe, then, the power of the unadorned, when just about anything goes over more easily from someone talking in a way that sounds sincere because of its form—or, more specifically, a lack thereof. The truth is that a great many people like talk when it’s sloppy, rejecting artifice, striving, the baroque. Hence “The rent’s too damned high,” “Where’s the beef?” and “It ain’t over.” However, Trump talk is both shaggy and mean. He forces us to confront the downsides of the cult of authenticity we all cherish so deeply. 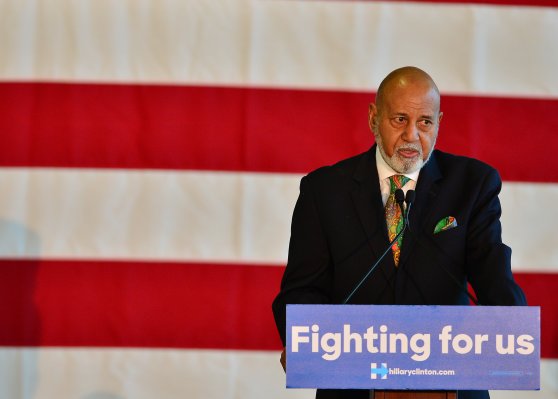 Hillary Clinton Is the Only Sensible Choice for Florida
Next Up: Editor's Pick