Inside the Republican Plan to Stop Trump

For months Republican donors and candidates had been squeamish about taking on Donald Trump, convinced he’d fade out or simply afraid of the blowback from the bombastic billionaire. Now with Trump on the cusp of securing the nomination, the GOP is gearing up to bankroll a desperate effort to stop him.

The loosely-coordinated anti-Trump efforts are attempting to get off the ground, uncover potentially damning research, and deploy it on television and online all before March 15, the date on which Trump stands to make a break-out in winner-take-all contests if his momentum isn’t stalled. It’s a tall order, with campaign operatives seeking to condense months of planning and strategy into days.

“They’re building the plane while trying flying it,” said one supportive, but skeptical GOP operative.

While candidates and outside groups have tried to attack Trump before, the new efforts will be defined by their attacks not on Trump’s hodgepodge policies—which voters have been willing to overlook—rather his personal and professional failings.

“What has happened in the past in the general GOP critique of Trump is a lot of it was rehashing similar arguments that have been out there,” Tim Miller, the spokesman for Our Principles PAC told TIME. “We have to play his game. We’re looking for what’s salacious.”

Miller said his group’s attacks on Trump will seek to undermine the three legs propping up Trump’s campaign: the notions that he speaks the truth, that he’s a successful businessman, and that he can beat Hillary Clinton.

“Hillary could be in a jail cell and she’d beat Donald Trump in a landslide,” Miller said. “The takeaway from [Super Tuesday] is that in many states over half of the electorate said they’d be unhappy with Donald trump as the nominee.”

Our Principles PAC has already made a seven-figure television ad buy in Illinois, Michigan, and Florida with an ad criticizing Trump University, the defunct education program currently embroiled in a fraud suit. Meanwhile Club for Growth Action, is deploying $1.5 million to attack Trump in Florida on his business bankruptcies and use of eminent domain. The new spending is on top of a campaign by the conservative group American Future Fund that is running ads featuring former customers of Trump University.

The attacks come as Trump’s rivals are taking turns hitting him. Peppering his stump speech with broadsides at the front-runner Sunday evening in Roanoke, Va., Marco Rubio called Trump a hypocrite, accused him of weakness, and even questioned his manhood. “You know what they say about men with small hands,” Rubio said, complete with a pregnant pause. “You can’t trust ‘em.”

Many Republican operatives are livid at the media—particularly cable news—who they argue have become beholden to Trump for record political ratings. “It’s time for the media to do their job and seriously vet Donald Trump,” said Katie Packer, the former Romney aide who founded Our Principles PAC .

But the Trump show has become a force unto itself, drawing the equivalent of millions of dollars in free airtime every time he speaks to the press. That’s why the GOP effort is now trying to play off Trump’s playbook of name-calling and insults, in hopes claiming a piece of the earned media pie.

Stevens brushed off the notion that the attacks have only strengthened Trump, saying no candidate until Rubio last week has seriously tried to weaken him. (Jeb Bush’s criticism of the front-runner was designed to show toughness and boost his own poll numbers, rather than peel off Trump supporters.)

“Trump has been in a race where he’s been fighting in a race where none of the other candidate were fighting him, so of course he was doing well,” Stevens said. Now he says the candidates have to start fighting Trump, and “never stop fighting.” 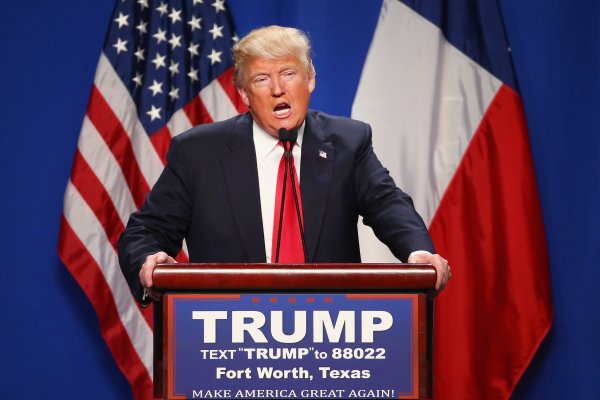 Democrats Salivate—and Shudder—at the Prospect of Trump
Next Up: Editor's Pick