With every ballot counted from Iran’s first election since the nuclear deal, it has become clear that no one political faction or group has managed to gain an outright majority in the Islamic Republic’s parliament. With the fate of 68 of the 290 seats having to be decided in a runoff scheduled for April, the only decisive outcome has been the near rout of hardliners, especially in the capital Tehran, by an unprecedented alliance between conservatives, reformists and moderates. That’s left the moderate government of President Hassan Rouhani with a free hand to pursue his policies of détente and reconciliation with the world community—policies that had been vigorously opposed by the hardliners.

But while the short term effects of Feb. 26’s vote might seem to favor Rouhani, who is up for reelection in 15 months, the formation of the first parliament in more than 30 years without a dominant faction might have surprising consequences for Iran’s internal politics.

In all but one of the nine previous parliaments formed since the Islamic Republic’s founding in 1979, there has always been a strong majority, usually in tandem with the administration in power at the time. Split government is not something that generally happens in Iran. But the faction most associated with the Rouhani presidency, the moderates, is if anything the weakest link in the tenth parliament. The only way the moderates were even able to make a showing in the election results was by joining up with reformists, still recovering from the brutal crackdown on their protests to the 2009 contested reelection of former President Mahmoud Ahmadinejad, and with those conservatives that had been pushed out of their traditional circles by more hardline elements of their parties.

Read More: Everything You Need to Know About Iran’s Elections

While that alliance paid off at the polls, it is by definition very fragile. Analysts believe that Rouhani will have to pay dearly to keep the coalition together if he wants to get any legislation of substance passed in the short time he has left before he must get back to the campaign trail in 2017. “Rouhani will have a golden period until the 2017 elections to pass bills that are important to the voters, bills on economic growth, foreign investment, lowering unemployment, international relations and the environment,” says Amirhossein Rasael, a veteran journalist and political analyst. “But when it comes to topics such as freer political activity or Hijab [compulsory Islamic veil for women] he will undoubtedly face challenges.”

Already main reformist figureheads, emboldened by their higher than expected showing in the election, are calling for an end to the five-year house arrest of banned green movement leaders Mir Hossein Mousavi and Mehdi Karroubi, as well as the loosening of the state-enforced controls on social and political interaction among the youth. Doing this would put Rouhani in direct confrontation with the more conservative elements of his coalition—but failing to do so could alienate the reformists, who carry a great deal of weight with the middle-class voters Rouhani will need for reelection.

Yet the politicians within the Principalist camp, the main umbrella group that covers both traditional conservatives and hardline elements, are in similar waters. While they blame the extremist positions taken by parties such as the Paydari Front for their lack of success at the polls, they in turn are being accused by those very same groups of having lost their revolutionary zeal. “Conservatism has crippled principalists… the people no longer see any appeal for the fight in their faces,” says Vahid Yaminpour, a young but rapidly rising cultural activist turned politician close to the Paydari Front, in reaction to the election results. “[The] Revolution does not linger for depressed pretenders, it will rise once again with its ever appealing revolutionary principles to forge new settings.”

While most Principalist politicians and decision makers would probably disagree with the assessment of Yaminpour and others like him, they know they cannot disregard the chance of disillusionment among their rank and file supporters, especially after such a dismal result for the conservatives and hardliners. It was exactly such a defeat in Tehran in a previous parliamentary election in 1999 that caused many of their supporters to turn to more extreme elements that directly led to the rise of Ahmadinejad in 2005. Though the former president has been all but sidelined at the present by wiser heads among the conservatives, he has already been touted as a savior of the Principalists by his supporters, who the very next day after the elections published a poster of Ahmadinejad on a channel dedicated to him on the messaging network Telegram. Written underneath in red bold letters “Now they must have realized, without you they are nothing!” 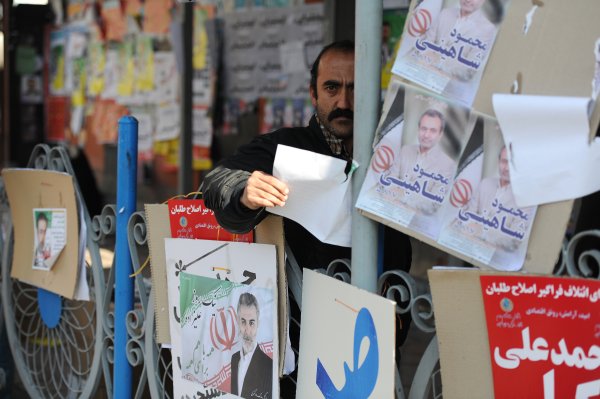 Iran's Moderates Face a Major Challenge in Elections
Next Up: Editor's Pick