The Supreme Court was divided along ideological lines in oral arguments on Wednesday in what is perhaps the most important abortion case in a generation, while swing vote Anthony Kennedy appeared to question the medical consequences of changing abortion practices in Texas.

The women on the Supreme Court seemed especially skeptical of Texas abortion restrictions in oral arguments in Whole Women’s Health vs. Hellerstedt on Wednesday, repeatedly asking why abortion was being singled out for extra constraints when more dangerous outpatient medical procedures are not. But Justice Kennedy, who will likely be the swing vote in this case, at one point questioned whether the trend towards surgical abortion in Texas, which some researchers say say is caused by longer waits at fewer abortion clinics, was “medically wise.”

The case concerns a Texas law, HB2, that requires abortion provider facilities to meet the standards of ambulatory surgical centers (ACS) and mandates that doctors who perform abortions must have admitting privileges at local hospitals. Abortion providers have challenged the law in court, alleging that it creates an “undue burden” on the constitutional right to an abortion. The Center for Reproductive Rights, which is arguing the case on behalf of Whole Women’s Health, says the restrictions would lead to the closure of about three quarters of Texas’s clinics.

Texas is defending the law, and state solicitor general Scott Keller argued Wednesday that the extra precautions are necessary to protect Texas women from possible complications from the procedure. If the court is split 4-4 without the late Justice Scalia’s vote, Texas’s law will go into effect, and similar laws in 24 other states will likely be allowed to stand.

Kennedy’s questioning betrayed little about which side will receive his crucial vote. He asked whether a district judge could delay the mandated restrictions for several years until clinics could comply with the new standards, and wondered aloud whether, if given more time to comply, the law would have a “beneficial effect” on clinic capacity.

But Kennedy also appeared concerned by the medical consequences of the Texas law, which some say has made it hard to obtain an early medical abortion (performed by taking two pills) and therefore increased the rate of surgical abortions, which usually occur later in a pregnancy. “Medical abortions are up nationwide but down significantly in Texas,” Justice Kennedy said. “I thought an underlying theme, or at least an underlying factual demonstration, is that this law has really increased the number of surgical procedures as opposed to medical procedures, and that this might not be medically wise.”

In his earlier writings on abortion, Justice Kennedy has demonstrated a cautious support for abortion rights but a vehement opposition to late-term abortion.

Justices Ginsburg, Kagan and Sotomayor were more clear about their feelings on the case, frequently sparring with Keller over his argument that HB2 is designed to protect women’s health. “Texas acted to improve abortion safety,” Keller said, and later argued that “the right held by women to make that ultimate decision is not burdened” because most major metropolitan cities in Texas still have a clinic.

The three women justices pushed back on that point, with Justice Kagan highlighting research cited by the plaintiff showing that with fewer than a dozen abortion providers left in the state, more than a million of Texas women will live more than 100 miles away, and many would be even more distant. “The slightest benefit is enough to burden the lives of a million women, that’s your point?” Justice Kagan asked Keller.

Justice Ginsburg disputed the state’s argument that even though the law would shutter clinics near El Paso, women in that area would not be burdened because they could travel to nearby New Mexico for an abortion, where physician admitting privileges or surgical center requirements do not apply. “If that’s all right for the women of the El Paso area, why isn’t it right for the rest of the women in Texas?” Ginsburg asked.

Justice Sotomayor objected to the idea that abortion would be singled out for additional restrictions, when other outpatient procedures like colonoscopies and liposuction have a much higher complication rate. “There are people who die from complications from aspirin,” the justice said. “Yet we don’t make people take aspirins in a ASC centers or in hospitals.”

Ginsburg also disputed the state’s argument that the majority of Texas women still live within 100 miles of an abortion provider, arguing that the law should be more concerned with those who aren’t so lucky. “Don’t we know from Casey that the focus must be on those who are burdened and not those who aren’t burdened?” she said, referring to a 1992 case that allowed restrictions on abortion as long as they did not create an “undue burden” on the patient.

Justice Breyer, also a liberal, appeared to align with Ginsburg, Kagan, and Sotomayor.

The conservative justices largely took issue with the question of whether the plaintiff could prove that Texas’s restrictions directly led to the closure of clinics. Justices Roberts and Alito repeatedly asked for specific evidence of the connection between the law and the clinic closures, and questioned how the plaintiff could prove the extent of the burden caused by specific provisions.

“Basically, your argument is that the law took effect, and after that point, there was a decrease in the number of clinics,” Alito said. The Justice also said that some of the restrictions, such as building requirements, struck him as “completely innocuous.”

Roberts and Alito also questioned why the remaining clinics couldn’t increase “capacity” to serve patients who would have gone to closed clinics. Justice Thomas, who recently made news after he broke a ten year silence to ask a question during a different case, said nothing.

The court is likely to issue a decision in June. 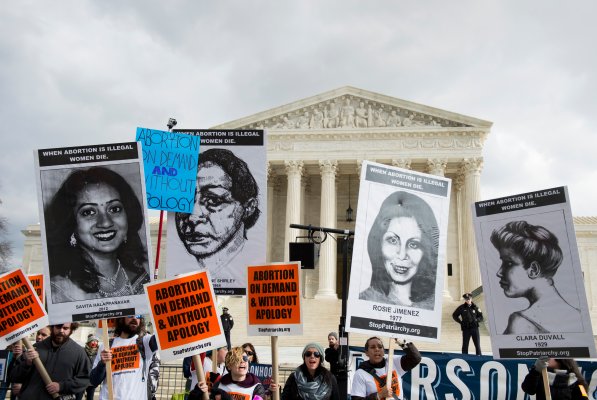