Chris Christie Is a Desperate Opportunist

Donald Trump speaks on stage with Chris Christie in Palm Beach, Florida, on March 1, 2016.
Luke Sharrett—Bloomberg/Getty Images
Ideas
By Christine Todd Whitman
Whitman is the former administrator of the EPA and former governor of New Jersey

On Friday, two New Jersey Governors made their endorsements for president. I endorsed Ohio Governor John Kasich because he has proven the ability to lead well. Governor Chris Christie endorsed Donald Trump. Anyone who has served as a governor knows that Trump lacks both the temperament and experience for the presidency; Christie knows the kind of demagogue with whom he has allied himself. No position he may have been promised in exchange—not Attorney General, not even Vice President—justifies so blatant an abdication of personal judgment to political calculation.

Many people have been willing to accept Trump’s vitriol, racism, sexism and thoughtless denigration of anyone who disagrees with him under the guise of his “saying it like it is.” But Trump’s flashy appeal is little more than a polished form of self-dealing marketing bluster. He’s an imposter whose “strength” is in fact a deep and dangerous kind of weakness.

My candidate has cut taxes, slashed regulations and balanced budgets where others feared to tread, turning Ohio’s $8 billion deficit into a $2 billion surplus and freeing resources to empower towns and counties to reinvest in much-needed basic infrastructure. Christie’s pick spurns this conservative approach to budgets and growth, instead offering serial bankruptcy and a cat-and-mouse game over his taxes.

Christie’s man sets records for hypocrisy, pledging to restore American jobs while dodging court settlements for his own systematic employment of illegal foreign workers. For all his railing against how much we’re “losing” to China and Mexico, Trump’s clothing line is manufactured in those two countries. In contrast, Kasich has brought jobs back to the heartland from both those countries, among others— enabling the private sector to create more than 400,000 jobs in just the last four years in Ohio.

My pick has rolled up his sleeves to wrestle the complex monster of healthcare to the ground. He’s cut better deals, improved patient choices and transparency and brought more people into the system, all while quashing costs. Christie’s says he’ll take our broken healthcare system and smash it further—whether by socializing it or privatizing it doesn’t seem to matter.

My candidate sees the drug-addicted and the poor, and knows their lives will be changed—and our budgets and economy strengthened—by breaking their fall and restoring their potential. Christie’s mocks the handicapped and women who challenge him just as surely as he disparages war heroes and whole communities of faith—often from behind his coward’s perch on Twitter. He has people who disagree literally dragged away from his presence—that’s the opposite of strong.

Trump shouts loud enough that no one questions how he is going to dismantle programs that are set by statute or work around a Congress and federal workforce he can’t fire. He claims he’ll balance the budget by eliminating waste—a claim that has been made by countless candidates. We as a nation need to make clear that we won’t fall for his rhetoric.

One thing that Trump has been able to do is gin up media ratings with his outlandish statements. Media outlets throughout the country have had a field day since it’s often impossible to distinguish this primary from a reality TV show. But we cannot afford to let the media determine who is a viable candidate to represent the Republican Party in November.

Make no mistake: the only thing a Donald Trump nomination will produce is President Hillary Rodham Clinton. If the idea of President Hillary worries you, then choose to support a governor who has demonstrated that he can actually lead and make the lives of those in his state better. Don’t let Donald Trump—or Chris Christie’s desperate opportunism—fool you. 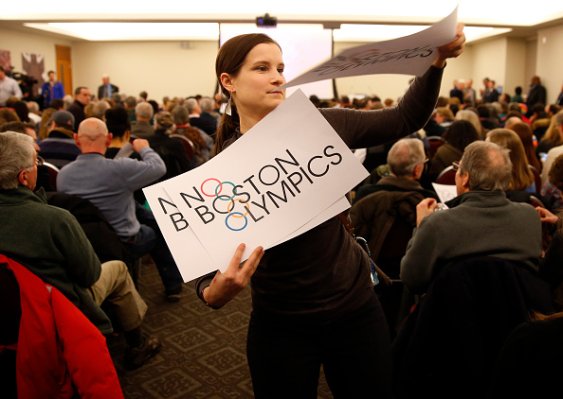 Why No Country Wants to Host the Olympics
Next Up: Editor's Pick