Ashton Kutcher Discusses the Strategy Behind His Super Secret Wedding

Ashton Kutcher and Mila Kunis have a black belt in secrecy.

During an appearance on The Ellen DeGeneres Show Wednesday, Kutcher, 38, dished on planning his ultra-secret summer wedding with Kunis.

“It was a ninja effort,” he said. “We really didn’t want helicopters at our wedding and it’s a legitimate concern. I was, like, posting things on social media that were in different locations to avoid it.”

The That’s ’70s Show star said they didn’t want to deal with helicopters hovering over their ceremony, and taking away from the special day.

“We didn’t want to be screaming our vows at each other and being like, ‘Forever! Did you say never?’ ” he said. “We went really under the radar with it.”

The couple tied the knot in July at The Secret Garden at Parrish Ranch in Oak Glen, California, a secluded spot surrounded by apple orchards, ponds and mountain views.

And now that the two are settled into married life, they are focusing on their 1-½-year-old daughter, Wyatt – and trying to keep her out of harm’s way.

“The first year you spend trying to keep them alive,” he said. “And then after that you actually hit a point where your job is to keep them from killing themselves.”

Kutcher explained that Wyatt has turned into quite the little daredevil as of late.
“She tried to kill herself on a regular basis,” the actor joked. “Like, she doesn’t realize that’s a cliff and could be dangerous. She’ll just jump off the thing. She doesn’t know yet.”

“You would think that they would come with instincts around fire and large falls, and they don’t,” he added. 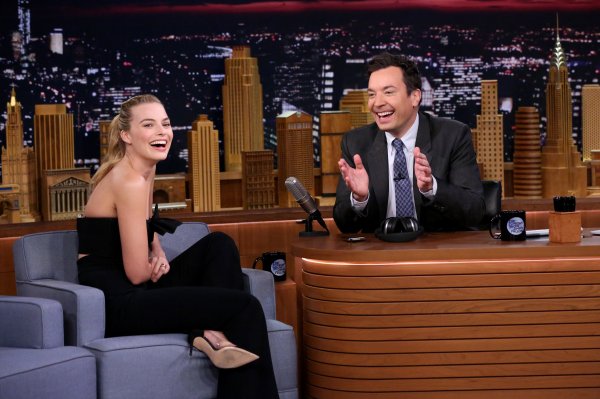 Margot Robbie Confused Prince Harry for Ed Sheeran at a Party
Next Up: Editor's Pick