David Lineman, 52, stood nursing a beer at the Redneck Country Club in Stafford, Texas. On a normal weeknight, he could be found here enjoying the country band that warmed up the crowd, dedicating “Your Cheating Heart” to Donald Trump. But on Tuesday night Lineman was here for Ted Cruz, the Senator he’d worked to elect in 2012. Televisions broadcasting Fox News all over the wooden, Western-style bar had just announced that Cruz had won Texas and Lineman was jubilant, but annoyed because those same televisions were now blaring New York billionaire Donald Trump’s press conference.

“The fifth-grade name calling has got to stop,” he lamented.

“My God, he really says nothing,” said Alisa Wanigasekera, 35, a Houston housewife originally from Canada who happened to be standing next to Lineman.

“Yeah, he’s the same as Barack Obama, an empty suit who’ll say anything to get elected,” Lineman replied.

And yet both Lineman and Wanigasekera were pretty sure that Trump, not Cruz, would be the ultimate Republican nominee. “I hope it’s not, I hope it’s Cruz, but I fear there are too many people in the race,” Lineman said.

Cruz himself echoed that sentiment not an hour later when he finally took the stage, after waiting for that “bloviating buffoon” Trump, as Cruz’s introducer called him, to clear Fox and CNN’s airwaves. “We are the only campaign that has beaten Donald Trump once,” Cruz yelled, his fist pumping in the air, “twice, three times!” Cruz has won Iowa and on Tuesday night Oklahoma and his home state of Texas. Three other candidates remain in the race: Retired neurosurgeon Ben Carson and Ohio Gov. John Kasich, who have not won a state yet, and Florida Sen. Marco Rubio, who won Minnesota later in the evening. “To the candidates who have not won a state,” Cruz said, “consider supporting me.”

Cruz then turned his fire on the front-runner. “America shouldn’t have a president whose words would make you embarrassed if your children repeated them,” Cruz said. “Our president should make us all proud, should inspire hope in all of us.” Cruz then accused Trump of supporting Obamacare, Planned Parenthood, Wall Street bailouts, amnesty, President Obama’s Supreme Court nominations, Palestine and the Iranian nuclear deal. “If you’re angry with Washington, I understand. But Donald Trump has been part of Washington’s corruption for 40 years. He’s Harry Reid’s favorite Republican candidate, and Jimmy Carter’s.”

But for Cruz, the victory wasn’t as big as he’d hoped. Cruz had overplayed his own expectations for Super Tuesday, when many Southern states that happen to be in the SEC college athletic conference would vote. “States like Georgia, Mississippi, Alabama, Arkansas, Oklahoma, Texas, those are conservative states. They are evangelical states,” he told CNN’s State of the Union in December. “They are states where our grassroots team is incredibly strong. And I view the SEC primary as a firewall.”

Since Cruz failed to beat Trump in any of the Southern states, except Oklahoma and Texas, Cruz exits Super Tuesday with his head above water, but still losing to Trump. Sure, he is doing better than Rubio and Kasich, but he needed them both to drop out earlier to consolidate their support behind him. Cruz’s path to the nomination is now narrower, something his own supporters worried about at his Tuesday rally. Of the dozen Cruz supporters TIME interviewed at the rally, 10 of them thought Trump would likely end up the nominee.

“I have a feeling Trump is going to take it,” said Angela Pellini, a 43-year-old entrepreneur from Junction, Texas. “I’d like having a Trump-Cruz ticket. And then Cruz will be set up to succeed Trump.”

That said, many worried a Trump nomination would hand the presidency to Democratic front-runner Hillary Clinton. “At this point, Donald Trump has so little substance, I’m sure there a skeletons in his closet,” said Michael Ghutzman, 27, a lawyer who is about to go work for the Harris County District Attorney’s office. “I’m scared he could shoot himself in the foot. In fact, there’s a high probability of that happening.”

Some might even support Clinton if it comes down to it. Standing behind Ghutzman, Matt Fischer, a 27-year-old salesman from Houston made faces at Trump on the television screen. “I don’t like Donald Trump. He’s not genuine—he’s fake,” he said. What if Trump is the nominee versus Hillary Clinton? “Oh man, I don’t know who I’d vote for.” 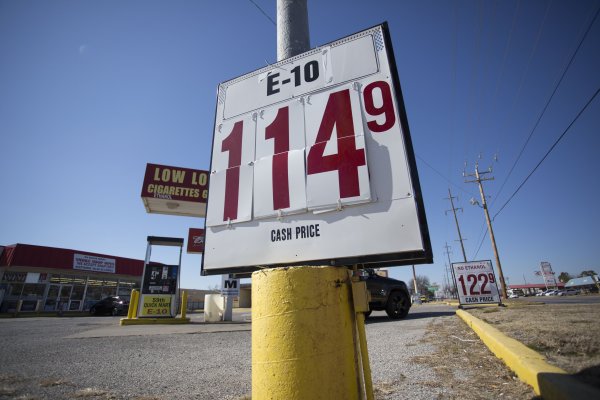 How Cheap Gas Might Hurt Ted Cruz on Super Tuesday
Next Up: Editor's Pick