Accounts Differ on Why Black Students Ejected From Trump Rally

Everyone agrees that a group of black students at Valdosta State University in Georgia was escorted from a Donald Trump rally on campus Monday. No one agrees on why.

In interviews with TIME and other media outlets, the students say security asked them to leave while they were quietly waiting for the rally to begin.

“We weren’t protesters. We weren’t there to start anything,” Tahjila Davis, a sophomore mass media major, tells TIME. “We’re just a group of students.”

But Valdosta Police Chief Brian Childress, who was not in the complex during the incident, said the students were escorted out after cursing.

“Here’s the deal, these kids were—I confirmed this myself when I was on the scene—these kids were in there and at some point started shouting profanity. I think the F-bomb was dropped a few times,” he says.

The incident came as protests at Trump rallies—and the response to them—have drawn increased attention. In recent weeks, protesters have chanted “Black Lives Matter” and “no more hate” at rallies, leading the candidate to call from the stage for their removal. At one rally in late February, Trump said he’d like to punch a protester “in the face.”

But the Valdosta students say they weren’t protesters at all. Davis and two other students told TIME that a group of black students decided to attend the rally, so they got tickets, went through a security check and then stood together on bleachers in the school’s gym. They said they did not chant or bring any signs, although many decided to wear matching all-black outfits.

At that point, the students say security asked them to leave, and they argued that they should be allowed to stay.

Videos from the scene shows several students, mostly black, filing out of the bleachers at the behest of a uniformed officer. In one video, a female student is shown raising her fist in the air in the style of a Black Power salute as her fellow students file out near a stairwell. In another video from the scene, students are seen arguing with a uniformed officer inside the stairwell. In yet another, students and officers are shown outside engaged in a testy exchange about why they were asked to leave.

“We have tickets to the event,” a young woman says emphatically in video from outside the event. “Talk to your administration about this,” an officer retorts. “They don’t listen to us,” another student says.

It’s also in dispute exactly who asked for the students to be removed. Childress, the local police chief, said the students were “asked by the Trump detail, the Trump group, to leave.” Lowndes County Sheriff’s Capt. Stryde Jones tells TIME that Trump staffers told his deputies, who also worked on event security, that they wanted the group escorted out, but he wasn’t able to identify a specific person. “This may be my lack of politics showing here,” he said.

The Trump campaign said “there is no truth to this whatsoever.”

“The campaign had no knowledge of the incident prior to reading these false reports and is still not aware of what took place,” Hope Hicks told TIME via email.

Martin Mulholland, a spokesman for the Secret Service, told TIME its agents were not involved in ejecting the students before the event in Valdosta and that agents do not routinely get involved with protesters as long as they are not causing a safety issue or making threats in violation of federal law. He said decisions about who is not allowed at private events are made by the event’s hosts.

“The bottom line is we don’t [get involved] if it’s a First Amendment thing,” Mulholland said. “The only time that we would remove someone from a site is if there is a threat that violates federal statute. In the unlikely event that it [a demonstration] becomes a safety issue, our agents might help out.”

Childress, the local police chief, said that he didn’t care who asked for them to leave.

“It’s unfortunate it happened, but I will tell you this—when they were told to leave, Mr. Trump had the right,” he adds.

Davis, who was escorted from the rally, says the incident left her feeling scared.

As they were being escorted out, the sophomore says, Trump supporters began chanting “Trump! Trump! Trump!” and throwing racial slurs their way. She and her schoolmates recall hearing “n—–” and “go home” and “get out of here” while they were heading toward the door.

“I was scared,” she says. “A building full of Donald Trump supporters is just crazy when people are shouting outlandish things at you, calling you names when you didn’t do anything. You don’t know if somebody is going to come up and hit you, throw something at you. It’s really terrifying.”

With reporting by Michael Scherer and Tessa Berenson. 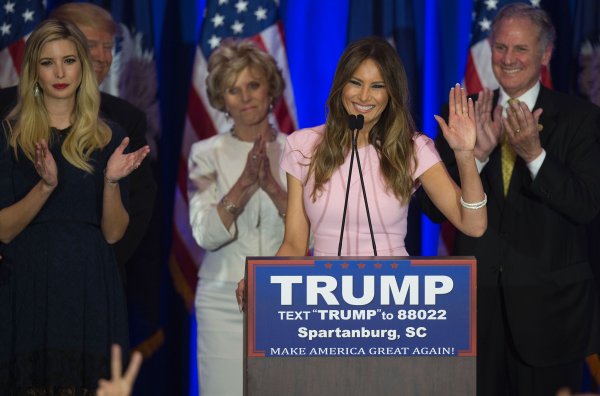 Melania Trump on Her Husband: 'He Knows the Consequences'
Next Up: Editor's Pick