New video of a Secret Service agent’s confrontation with a TIME photographer at a Donald Trump rally depicts the episode in more detail, showing the agent grab the photographer by the neck with two hands and throw him to the ground. The photographer is standing within the designated press area with his arms at his side.

The video, which TIME obtained Tuesday from a person present at the rally in Virginia on Monday, shows the moments preceding the incident and the confrontation itself. At a chaotic moment when protesters were being escorted out of the event, TIME contract photographer Chris Morris is seen in what previous videos have showed—and he himself has acknowledged—was a verbal confrontation with the agent. Then the agent grabs Morris by the neck with two hands, and throws him down, with Morris hitting a table before falling to the ground. (The sequence begins at about the 7-second mark of the video below.)

As previously reported, TIME has contacted the U.S. Secret Service to express concerns about the agent’s use of force. The incident is under review and a statement from the Secret Service is expected as early as today. Morris has also expressed remorse for his part in the confrontation. 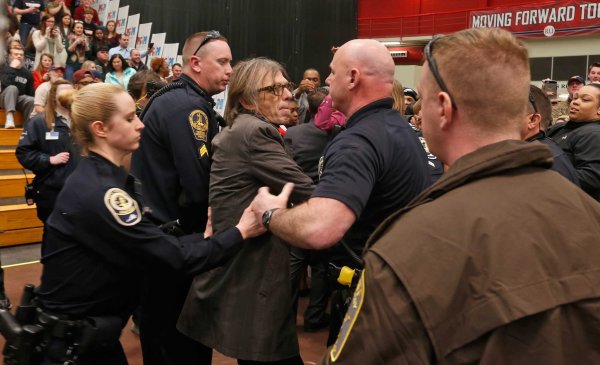 TIME Photog at Trump Rally in Secret Service Confrontation
Next Up: Editor's Pick